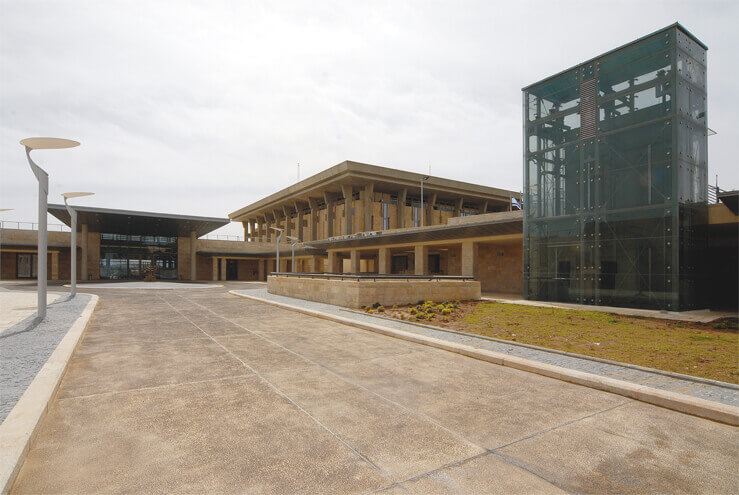 The Knesset is the legislative branch of the Israeli government or parliament which sits in the Knesset compound in Givat Ram, Western Jerusalem. The Knesset is located on a hilltop; it is near the Israel Museum, Supreme Court, Jewish National Library, and other government offices. The building was completed in 1966 and since then has undergone several renovations and extensions including the addition of new wings in 1992 and 2007.

Today it is one of the “greenest” parliament buildings in the world with solar panels covering the roof, auto-close air-conditioners, recycled paper, and thermally insulated double-paned windows.  The construction of the original assembly building was funded by James de Rothschild and completed in 1966. It was built on land leased from the Greek Orthodox Patriarchate of Jerusalem.

Over the years there have been additions to the complex with structures built around the assembly building including the Negba Wing in 1992 and the Kedma Wing in 2008. Today it is possible to tour the Knesset and its many points of interest. The Knesset is interesting not only because of its political and national importance but also for its architecture, artwork, and gardens.

Israeli Government at the Knesset

The 120 Knesset members gather at the Knesset assembly building to enact laws, debate national issues, and work in multiple committees to oversee the workings of the country. The Knesset was convened for the first time in February 1949 following the independence of the State of Israel and the first election. The elected representatives voted to the name of the legislative body "Knesset", which means assembly or gathering in Hebrew. The parliament met in several locations before moving to its present location.

The Knesset building was designed by Joseph Klarwein, although the outcome was very different from Klarwein's original plan and several architects were involved in different parts of the planning and construction. As a result, the building's architecture is a mixture of styles. The Knesset building is square with 10 columns on each side. Much of the building is constructed with concrete and the exterior walls have a reddish stone from the Galilee.

The plenum (Assembly Hall) is three stories high with the Knesset members seated in a horse-show shape on the plenum floor facing a dais where the Speaker sits. Behind the dais, the wall is adorned with a piece by sculptor Dany Karavan. Looking down over the plenum floor are the VIP gallery and the public gallery. Nearby the Chagall State Hall features art by Marc Chagall. The Russian-born Jewish artist created three tapestries entitled "The Vision of the Final Redemption," "Exodus," and "Return to Zion" as well as floor and wall mosaics.

The first sight you see as you approach the acropolis-looking Knesset building is a large bronze seven-branched Menorah by the British sculptor Benno Elkan engraved with scenes from Jewish struggles throughout the years. It was a gift from the British Labor Party in 1956. Nearby are entrance gates with abstract forms symbolizing the destruction of European Jewry in WWII and an adjacent memorial dedicated to all fallen Israeli soldiers; both by sculptor David Palombo.

At the entrance to the Knesset, there is a memorial to the fallen soldier designed by sculptor Zelig Segal. The main doors of the Knesset building are by Zelig Segal and entitled "Gate of the Tribes." The wood and copper doors depict ancient Jewish symbols, the gathering of the Diaspora, and the symbols of the 12 Tribes of Israel.

Other noteworthy works of art in the Knesset include the embossment by Dan Ben-Shmuel; the ceramic wall by Hava Kaufman; the Seven Species Menorah by Eliezer Weishoff and works by world-renowned artist Reuven Rubin. There is also a photography exhibition by Knesset's former official photographer, David Rubinger. The Archaeological Garden features artifacts uncovered in Jerusalem from six historic periods. The Garden tour is self-guided and open to all (no matter if visiting alone or with a group).

You will also see work by Joseph Kuzkovsky, Josheph Israels, Marc Hirschberg, Ahuva Sherman, Pinhas Litvinovsky and Yaacov Eisenscher. Works of art on display include the 17th century Holy Ark which came from the Jewish community in Saragna, Italy. Near to the Knesset building is the Wohl Rose Park which stands between the Knesset and the Supreme Court. The garden boasts 400 varieties of roses including a rose from each country in the world, miniature roses, and experimental hybrid species of roses.

On a tour of the Knesset, visitors are introduced to the principles of Israeli democracy and to the role the Knesset plays in the working of the country. Visitors get to see the magnificent works of art on display in the Knesset building and visit the Knesset Committees Wing, Plenary Hall, Chagall Hall, and an exhibit of the Israeli Declaration of Independence. In addition, it is sometimes possible to observe plenary debates from the Visitors' Gallery.

Note that there is a dress code in the Knesset for all those over 14 years old; wearing shorts, torn pants, shirts with political slogans, sleeveless shirts, ¾ pants, belly tops, and flip-flops are prohibited. You can park in the HaLe’om Car Park near the Supreme Court and take the free shuttle up to the Knesset building. The shuttle leaves every fifteen minutes. Take your parking ticket to be stamped after the tour to receive free parking.