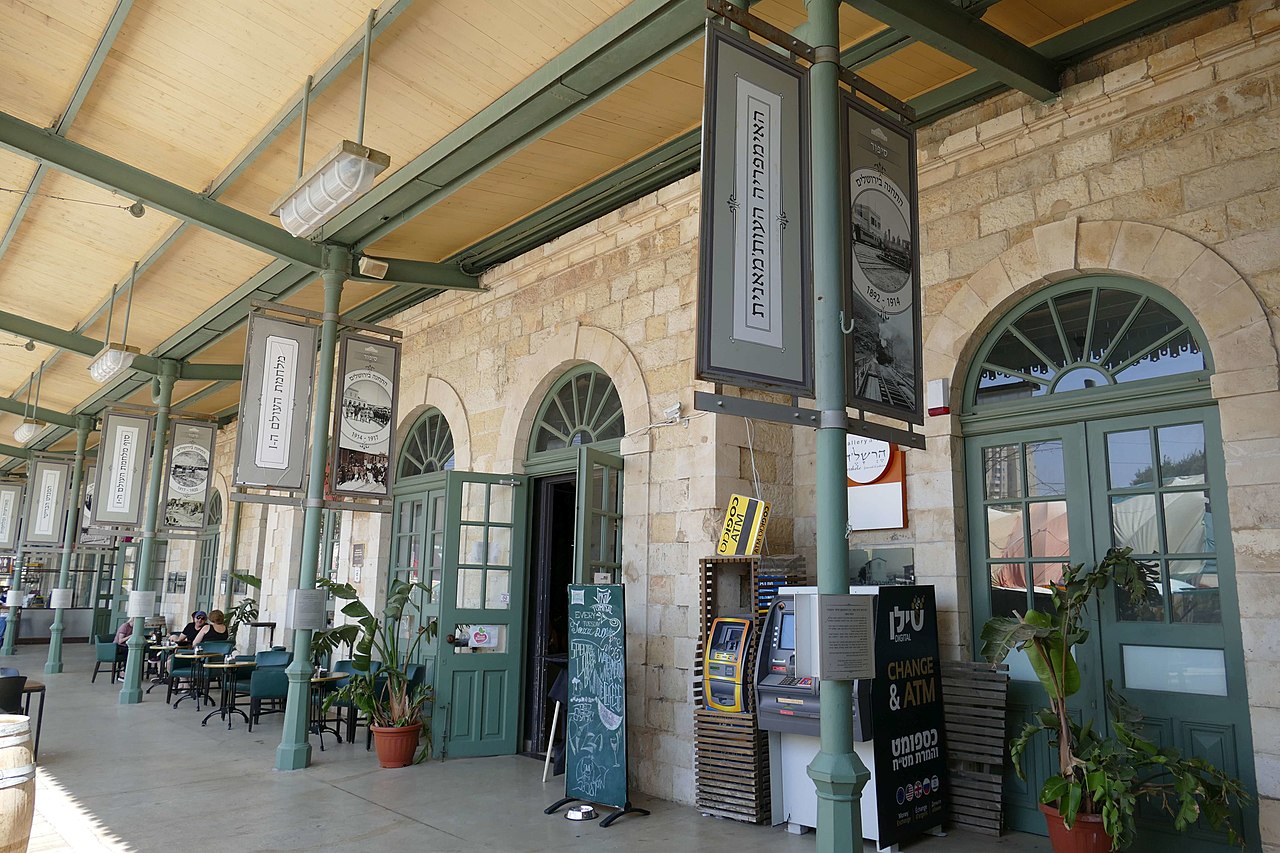 Jerusalem’s historic first railway station (HaTakhana HaRishona) is near the German Colony. It was the last stop on the Jaffa-Jerusalem railway. The station first opened in 1892 and closed in 1998 when the railway stopped operating. For 15-years Jerusalem’s first station stood abandoned and neglected. Then, in 2013, the station was restored and opened as a cultural and entertainment venue. The station has become a venue for annual cultural events and festivals, including the Jerusalem Film Festival and the Jerusalem Jazz Festival.

During the 19th-century, Jaffa Port was the main entry point to the Holy Land. Jewish businessmen, including Moses Montefiore and Dr. Conrad Schick, discussed the need for a railway connection between Jerusalem and the coast. In 1885 Jewish businessman, Yosef Navon began looking into the possible construction of a railway line. He had the advantage of being an Ottoman subject and having connections with the Ottoman rulers in Palestine. Navon went to Constantinople to promote the project and was granted a 71-year concession to build the railway. Due to financial difficulties, Navon was forced to sell the franchise, and he went in search of investors for the project. Eventually the Societe du Chemin de Fer Ottoman de Jaffa a Jerusalem et Prolongement was set up to build the line. The railway line follows the ancient route used by pilgrims ascending to Jerusalem. Now, instead of 10-hours by camel or donkey, pilgrims could reach Jerusalem by train.

Originally the train station comprised a double-story building, with two wings. Various alterations were made over the years, but the basic shape of the station was maintained. The station welcomed tourists, business people, and pilgrims who boarded the train in Jaffa and traveled to Jerusalem.

The number of passengers decreased overtime as motor traffic increased, and public bus services improved along a new highway to Jerusalem. Trains to Tel Aviv were reduced to twice a day until eventually, they were redundant. After its closure in 1998, and a period of 15-years, restoration began in 2013. The station was considered a valuable piece of Jerusalem’s architectural history, and a location with potential as a public space.

Today visitors can enjoy the facilities spread across the former rail yard which is covered in wooden decks. The complex makes use of the historic station house, ticket hall, and concourse. There are food stalls, restaurants, vendor carts, family attractions, and pubs. You can see an exhibition of historical photographs on display in the old station house. A cycle path, built along the route of the old train tracks, connects the First Station to the Train Track Park.

There is an exhibition of model trains and a stage for performances. See the Psalms on the Wall, graffiti exhibition, an artist’s interpretation of the Book of Psalms. The Space-Distance photographic exhibit focuses on the social distancing imposed during the COVID-19 pandemic, and how it has affected our lives. Namaste is an art project displayed at the First Station, featuring six large murals of people from different cultures, welcoming visitors with the namaste gesture.

The Jerusalem First Station open-air mall hosts markets throughout the week. From Sunday to Thursday, there is the Jerusalem Designers’ Fair; on Tuesdays, there is the Ramat Rachel Farmers’ Market and on occasional Fridays, you can enjoy a second-hand market. There are weekly outdoor dance and fitness classes held for the public including yoga, kung fu, Zumba, hip hop, and kickboxing. Note that due to coronavirus restrictions some of the First Station events may be restricted or canceled.