Mount Zion is a broad low hill adjacent to the south side of the Old City of Jerusalem. Mount Zion connects seamlessly with the Armenian Quarter of the Old City via the Zion Gate. For hundreds of years, the mount has had religious significance. Mt. Zion played an important role in the Bible and Second Temple Jerusalem (516 BC - 70 AD). In the Hebrew Bible the name Zion was used to describe the City of David, Temple Mount and Jerusalem.

Over the years Zion has become symbolic of the Holy Land as a whole and Jerusalem in particular. Mount Zion lies outside the present Old City walls that were built about 500 years ago under Suleiman the Magnificent. Legend has it that when the Sultan heard that the site of David’s Tomb had not been included within the city walls he had the architects executed. There are two Muslim graves near the Jaffa Gate that are said to be the graves of the two luckless architects.

David’s Tomb - Mount Zion’s role in the Hebrew and Christian religious traditions has earned it great significance. Sites on Mount Zion include David’s Tomb, where King David is said to be buried. His cenotaph is housed in a small room on the entrance level of a building. On the upper level of the same building is a room believed to be where Jesus had his Last Supper.

The Upper Room - This room was built in the 12th century and has the typical Gothic vault ceiling. The Upper Room of the Last Supper or Cenacle was at one time a mosque dedicated to the Prophet David (Nebi Daoud). You can still see the minaret above the building; a prayer niche (mihrab) and Koran passages on the stained glass windows.

Dormition Abbey - One of the largest structures on Mount Zion was the Byzantine-era Hagia Zion Church which stood where the Dormition Abbey stands today. The abbey stands where Mary is thought to have passed away.

St Peter in Gallicantu - On the eastern slope of Mt. Zion is the Church of St. Peter in Gallicantu. The church is built on the site where Jesus was imprisoned and brought before the High Priest Caiaphas after his arrest by the Romans. On the roof of the church, you can see a rooster weather vane; this recalls Peter’s denial of Jesus three times before the rooster crowed.

Other Mt. Zion Attractions - On Mount Zion there is a small memorial dedicated to the victims of the Holocaust. Another Mount Zion museum is dedicated to Israeli sculptor David Palombo. You can visit the Protestant cemetery on Mt. Zion and the Catholic cemetery where Oscar Schindler is buried. Shindler saved 1,200 Jews during the Holocaust.

Join our Highlights of Jerusalem Tour to explore Mount Zion. 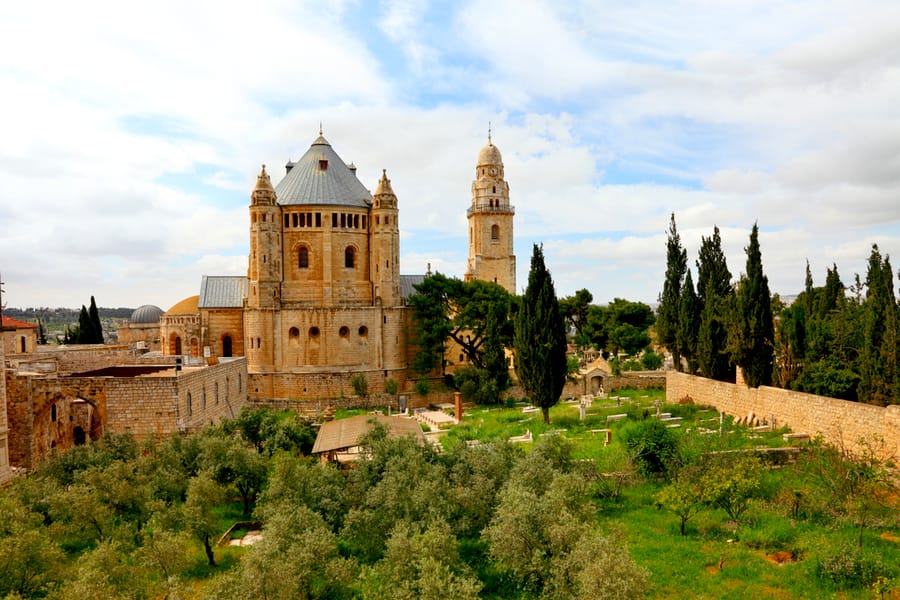