The Jerusalem Archaeological Park - Davidson Center lies near the Dung Gate in Jerusalem’s Old City walls adjacent to the Temple Mount and the Western Wall. The site encompasses the southern part of the Western Wall and Temple Mount’s southern retaining wall plus the excavations that took place in the vicinity. The park holds archaeological remains found at the site and has an exhibition area that uses multi-media to bring history to life.

Archaeological remains at the site span about 5,000 years from the Canaanite Era (Bronze Age) to the Second Temple Period. The earliest find dates back to the reign of King Solomon in the 10th century BC. The most significant finds in the park are from the Second Temple Period when Jews would gather here to prepare to enter the Holy Temple. Here they would purify themselves in the ritual baths, purchase an offering for the temple and ascend a massive flight of steps which led up to the Huldah Gates that opened onto Temple Mount where the Second Holy Temple stood and where the Dome of the Rock stands today.

In 70 AD the Romans destroyed the Holy Temple on Temple Mount knocking down the massive blocks of stone that formed the walls of the temple. Many of the remains of the former temple walls can be seen in the Davidson Archaeological Park. During the Byzantine era following the destruction of the temple Christian structures were built on the mount and in the 7th century, the Muslims conquered Jerusalem and built the Al-Aqsa Mosque (705 AD) and the Dome of the Rock (691 AD) on Temple Mount.

Herodian Street - At the base of the southern wall of Temple Mount where it meets the Western Wall is a wide Herodian street dating back more than 2,000 years. This would have been Jerusalem’s main street during the Second Temple Period.

Robinson’s Arch - In the 19th century, archaeologist Edward Robinson noticed the remains of an arch protruding from the southern wall. The arch, now known as Robinson’s Arch is all that remains of a huge complex and arch that spanned the Herodian street below and led to Temple Mount.

Temple Steps - Near the Southern Wall sections of the original wide staircase leading up to Temple Mount have survived. You can walk up these steps as pilgrims did 2,000 years ago.

Artifacts and archaeological structures were uncovered from later periods of history including Byzantine gold coins and the remains of Umayyad palaces from the Muslim Period. One of these palaces had a bridge connecting it to the Al-Aqsa Mosque which would have given the Sultan direct access. The Muslim Era structures were destroyed by an earthquake in 749.

In addition to the open-air archaeological site the center also has an indoor museum exhibition area housed in the former storerooms of a Umayyad palace. The ancient palace structure has been converted into a museum using a sleek glass and metal design. Uncovered artifacts are displayed and there are illustrations and computerized media used to take you back in time. There is a 3D model of Second Temple Period Jerusalem which immerses visitors in the ancient city giving the feeling that you are joining the many pilgrims making the journey to the Temple. 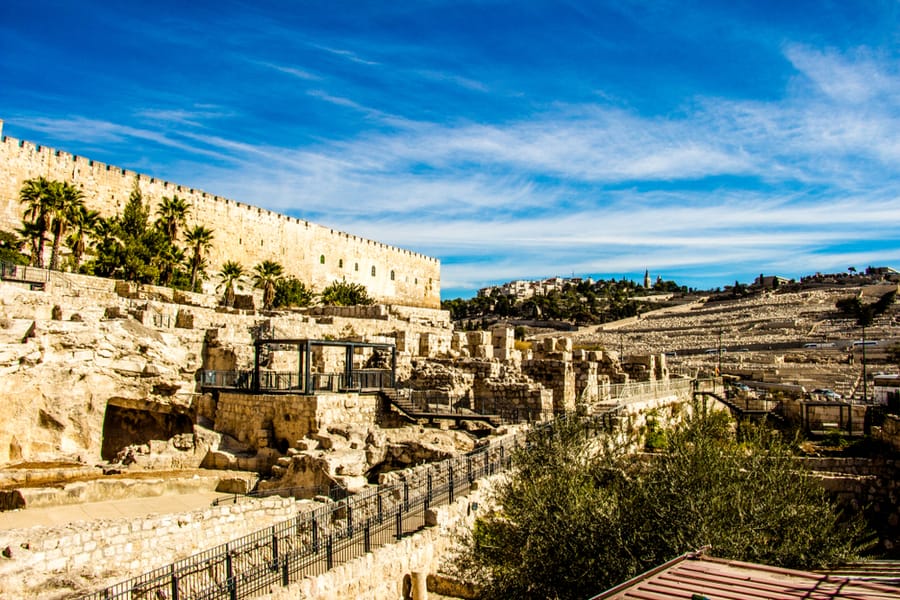