The Kidron Valley in the Bible

The valley features in the Old Testament several times. David fled across the Kidron Valley to escape his rebelling son Absalom; King Asa worshipped idols in the valley and Athaliah was executed here. The Kidron is believed to be the valley referred to in Joel 3:2, 12 when God says that he will assemble all nations in the Valley of Jehoshaphat for their final judgment.

In the New Testament Jesus left the last supper with his disciples and crossed the Kidron Valley to the Mount of Olives. Here he prayed and was later arrested in the Garden of Gethsemane at the foot of the Mount of Olives. Jesus would have walked across the Kidron many times in his lifetime. The valley is mentioned in Matthew 4:8 as the site where the devil dared Jesus to jump from the highest point of the Temple.

During the Second Temple period (521 BC - 70 AD) a bridge spanned the valley connecting Temple Mount to the Mount of Olives. On the Day of Atonement (Yom Kippur) a goat would be taken across the bridge into the wilderness as an offering in lieu of the people’s sins (scapegoat).

Landmark Sites of the Kidron Valley

The main site in the Kidron Valley is a group of three 2,000-year-old ancient tombs cut into the Mount of Olives. The tombs would have been made during Jesus’ lifetime. For centuries the valley and Mount of Olives have been sought after burial sites. It is believed that when the Messiah appears he will do so in the Kidron Valley where he will raise the dead, making it a great place to be buried!

One of the tombs belonged to a priest’s family and bears a Hebrew inscription to “the sons of Hezir.” The middle tomb is Zechariah’s Tomb and has a square shape with a pointed roof. At the base is a small chamber cut into the rock. The southernmost of the tombs was carved out of the rock and never finished. Further north of these tombs is another tomb that Jesus would have seen under construction. It is known as the Pillar of Absalom. It has a square shape cut out of bedrock and a finely cut conical roof cut from a single block of stone. An eight-chambered catacomb lies to the left with an inscription from 400 AD. 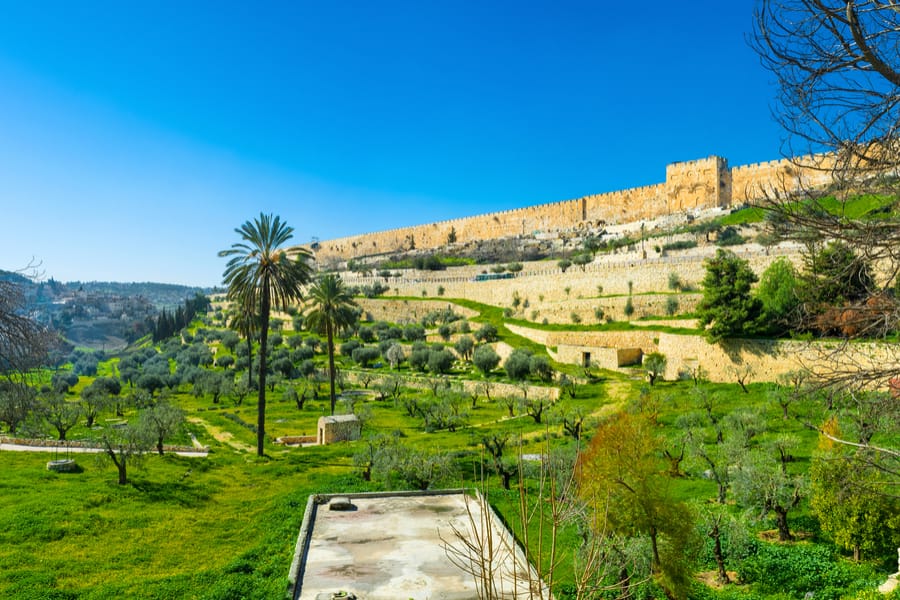