The Austrian Pilgrim Hospice or Osterreichisches Pilger-Hospiz is an oasis in the heart of Jerusalem's Old City. It is the oldest Christian guesthouse in Jerusalem with an unrivaled location in the Muslim Quarter where the Via Dolorosa and Hagai Streets meet. The history of the 166-year old hospice reflects the history of the region. Even if you are not a guest of the establishment a visit to the Austrian Hospice, and its roof terrace is an unforgettable experience.

History of the Austrian Hospice, Jerusalem

In 1854 the hospice was founded by the Archbishop of Vienna as an ecclesiastical foundation. The hospice was created as a base for Christian pilgrims visiting the Holy Land from Austria and inaugurated by Austro-Hungarian Emperor Franz Joseph I in 1869. The building originally had two stories but with the high volume of pilgrims more rooms were needed and a third floor was added in the late 19th century.

The hospice was commandeered by the British following WWI and used during the British Mandate as an orphanage. When the Jordanians took Jerusalem in the 1948 War of Independence they repurposed the building as a military hospital. When Israel reclaimed the city in 1967 the Jordanians left but the building continued to be used as a military hospital, this time by Israelis. In the 1980s the building was returned to the Austrian church. The property was completely renovated to its original condition and its original function as a haven for visitors to the Holy Land.

The entrance to the hospice is fairly inconspicuous but stepping inside you'll find surroundings that would not be out of place in Europe. The Austrian Hospice Café Triest recreates the traditional Viennese coffee-house atmosphere. There is an indoor area and an outside terrace – the largest green area in the Old City. The café staff is young volunteers from Austria and they serve up delicious Austrian cuisine including apple strudel, Sachertorte and schnitzel. The café (non-kosher) is open from 10 am to 9 pm and serves hospice guests as well as visitors not staying at the hospice. In addition to the café, the hospice has several other areas worth seeing including the House Chapel which dates back to 1909.

The Schwester Bernadette Terrasse or roof-top terrace offers views across the Old City. See the flat roofs, spires, domes and steeples of Jerusalem's ancient Old City. From here you can see the Temple Mount where the beautiful Dome of the Rock stands and beyond that the Mount of Olives. The roof-top is accessible by elevator and is open 10 am – 6 pm to hospice guests and visitors alike. 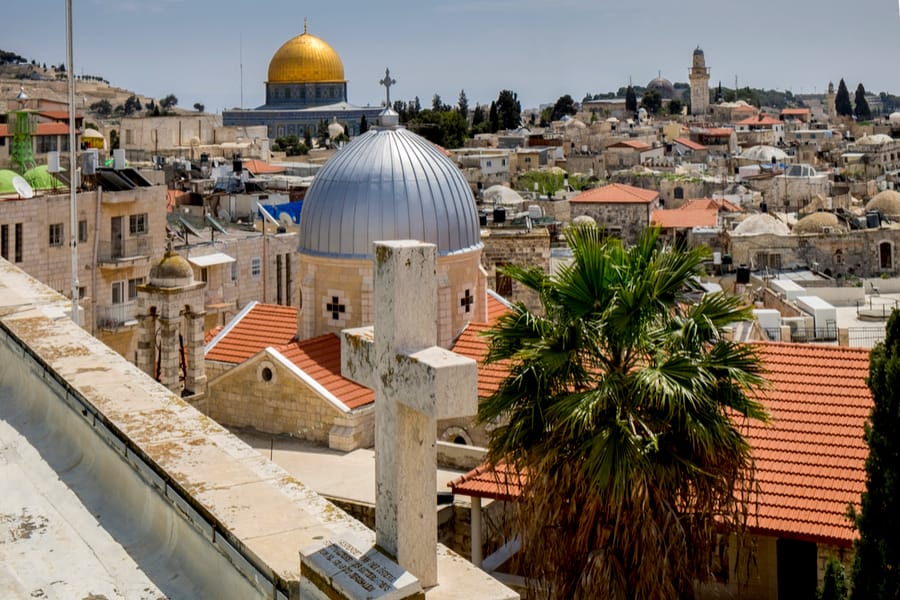