The Ophel Promenade runs parallel to the eastern wall of Jerusalem’s Old City. It stretches from the Lions’ Gate and entrance to the Gihon Spring, around the southeastern corner of the Old City to the Dung Gate and the City of David archaeological site. The promenade is part of the Jerusalem Walls National Park that surrounds the Old City. On the western side of the promenade is the Old City wall, and beyond it stands Temple Mount.

On the eastern side of the promenade is Kidron Valley and beyond it the Mount of Olives. Along the promenade are observation points at strategic locations to give visitors the best views in all directions. Highlights of the Ophel Promenade are the views of churches on the Mount of Olives, a close-up view of the sealed Golden Gate in the Old City walls, and views of the Ophel Archaeological Garden.

What is the Ophel, and Where is It?

The Biblical word Ophel refers to a part of a settlement built on an elevated and fortified piece of land. In the Bible, Ophel refers specifically to two cities, Samaria (Kings II, 5:24) and the City of David (Chronicles II, 27:3; 33:14 and Nehemiah, 3:26; 11:21). The City of David was King David’s city, established just outside the walls of present-day Jerusalem’s Old City.

A walk along the Ophel Promenade takes you past the Ophel Archaeological Garden, which is part of the Davidson Center Archaeological Garden. Here excavations have uncovered artifacts from the First Temple and Second Temple periods, as well as Byzantine and Early Muslim periods. A 3,000-year-old pottery shard was discovered bearing a description of Jerusalem. This artifact is known as the Ophel Inscription or Ophel Pithos and is the earliest alphabetical description of Jerusalem in existence.

Remains from the First Temple Period (1200BC-586BC) include a segment of the wall that probably encompassed the city. Other findings from the same era include a jar with a Hebrew inscription, an inner gatehouse, and a corner tower. Not all archaeological experts agree with the dating of these findings. There have also been discoveries of Hellenistic-period buildings. Archaeologists uncovered Roman-era ritual baths where worshipers may have bathed before entering the temple.

Also uncovered were the southern steps to Temple Mount, and some pots and stones still charred black from the fire that destroyed the First Temple. Excavations revealed Byzantine Christian structures and Muslim palaces from the Umayyad Period(661-750AD).

Points of Interest along the Ophel Promenade

Along the length of the promenade, you can see the ancient Old City walls built by Ottoman ruler Suleiman the Magnificent between 1537 and 1541. The Golden Gate is one of eight gates in the Old City walls. But it is the only one that is sealed permanently. The gate has deep religious significance. For Jews, it is the gate where the Messiah will enter the city. For Christians, it is where Jesus entered the city on Palm Sunday.

And for Muslims, the gate is the site of Allah’s final judgment. As you turn the southeastern corner of the Old City, there is an observation point on the Ophel Promenade that looks out to Avshalom’s Tomb. The monumental rock-cut tomb is one of three in the Kidron Valley. The tomb with the conical roof is traditionally the burial place of Kind David’s rebellious son, Absalom. All of these ancient sites, and more, can be seen on a walk along the Ophel Promenade, from the Lions Gate to the Dung Gate. 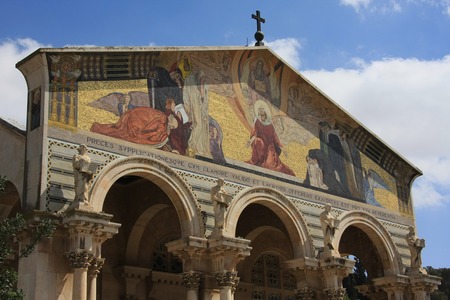