Zion Gate is one of the gate entrances in the Jerusalem Old City walls; the walls were built in 1540 under Turkish leader Sultan Suleiman the Magnificent and surround the 1km² Old City. There are eight gateways (the Golden Gate remains closed). Zion Gate is on the southwestern corner of the Old City and gives direct access from Mount Zion to the Old City’s Armenian and Jewish Quarter.

The Zion Gate is “L” shaped – you enter through the gateway, make a 90° turn under the stone archway and exit the gateway. This shape was chosen to increase security. The gate has a second floor equipped with defensive installations including a balcony above the entrance where boiling oil could be poured on the attacking enemy. Adjacent to the entrance is a small window in the stone wall with an arrow slit where guards could safely aim at their attackers.

Where Did Zion Gate Get Its Name?

The Zion Gate is named after Mount Zion which is directly outside the city walls adjacent to the gate. In Arabic, the gate is called Bab el Nebi Daud or “Gate of the Prophet David.” This is probably because King David is buried on Mt. Zion. The gate is also called “Bab Hart el Yahud” or Gate of the Jews, perhaps because it leads to the Jewish Quarter.

The gate is also called the Wounded Gate as it bears the “scars” of bullet holes from the 1948 Israeli War of Independence. At the time Arab forces held the Old City’s Jewish Quarter under siege. Jewish forces attacked the Jordanian troops guarding the Zion Gate and in the exchange of fire hundreds of bullets left pockmarks in the stone wall around the gate. Although the Jewish fighters succeeded in taking the Jewish Quarter their gain couldn’t be held and they were forced to retreat leaving Jordan to occupy the Old City from 1948 to 1947 when the city was retaken by Israel. For the duration of the Jordanian rule the Zion Gate remained closed. 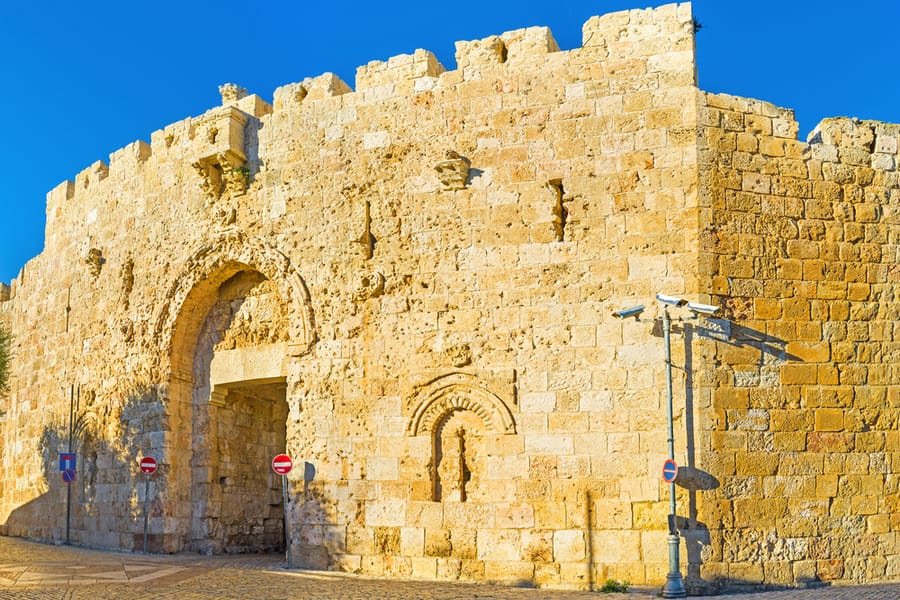