The Cardo Maximus was the name given to the north-south thoroughfare of Roman and Byzantine cities. “Cardo” means heart and the Cardo ran through the “heart” of the city. In the 130s AD, Hadrian had Jerusalem rebuilt and like other Roman cities, Jerusalem’s street plan included a Cardo. It was a paved, 22.5 meter-wide road running southward from the Damascus Gate.

Later during the Byzantine era in the 6th century AD, Emperor Justinian had the Jerusalem Cardo extended taking it further south all the way to the Church of the Holy Sepulchre and the Zion Gate. The street may have been used for ceremonial processions from the Church of the Holy Sepulchre. For the entire length of the Cardo, the road was flanked with colonnades, covered walkways and a shaded arcade.

Today visitors to the Old City of Jerusalem can wander through the Jewish Quarter and look down on the southern part of the excavated Cardo. You can see the tall, thick columns, ornate capitals, the arcade where merchants would have stood, and the large flagstones that paved the Cardo. 500 years after the original Cardo was constructed the Crusaders built a bazaar along part of the road. Today these Crusader-era stores have been restored and once again serve their original function.

The shopping section of the Cardo is beneath a beautiful vaulted ceiling and the modern stores are housed in the ancient Crusader shops that line the Cardo. The stores sell locally made jewelry, religious artifacts, artwork, and other merchandise. Other sections of the Cardo are no longer visible having been covered by new structures over the years.

The famous Madaba Map, a floor mosaic found in a 6th-century Byzantine church in Jordan depicts the Holy Land with the Cardo as its main artery. The Madaba Map is the oldest surviving cartographic depiction of Jerusalem. Visitors to the Cardo in Jerusalem can see a replica of the Madaba Map. Visitors can also see a large mural painting by students of the French school of art Creation de la Cite. The mural depicts the Cardo as it would have been 1500 years ago, a bustling street with vendors displaying their wares; a covered walkway; animals, and colorful characters.

Join the Jerusalem Old City tour to visit the Jewish quarter and see the Cardo. 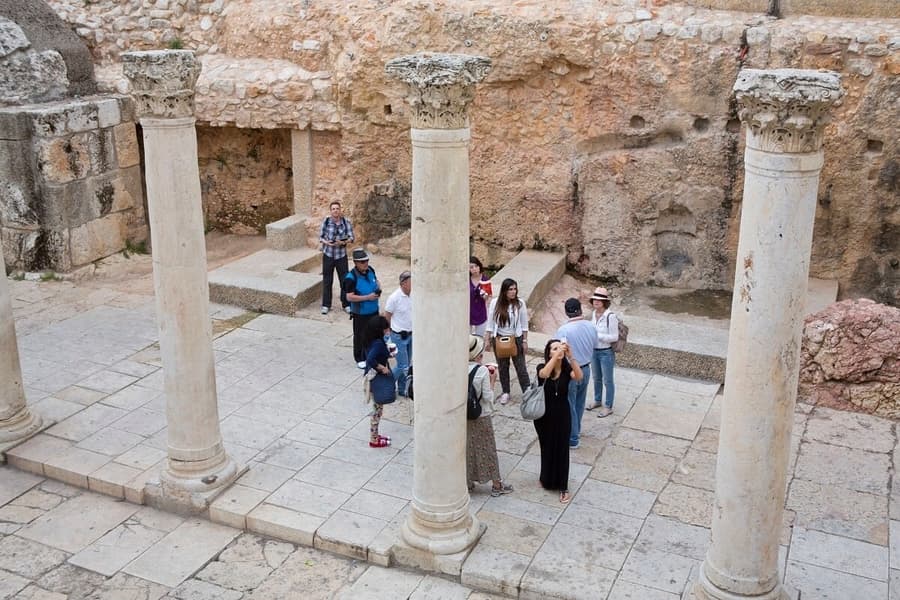