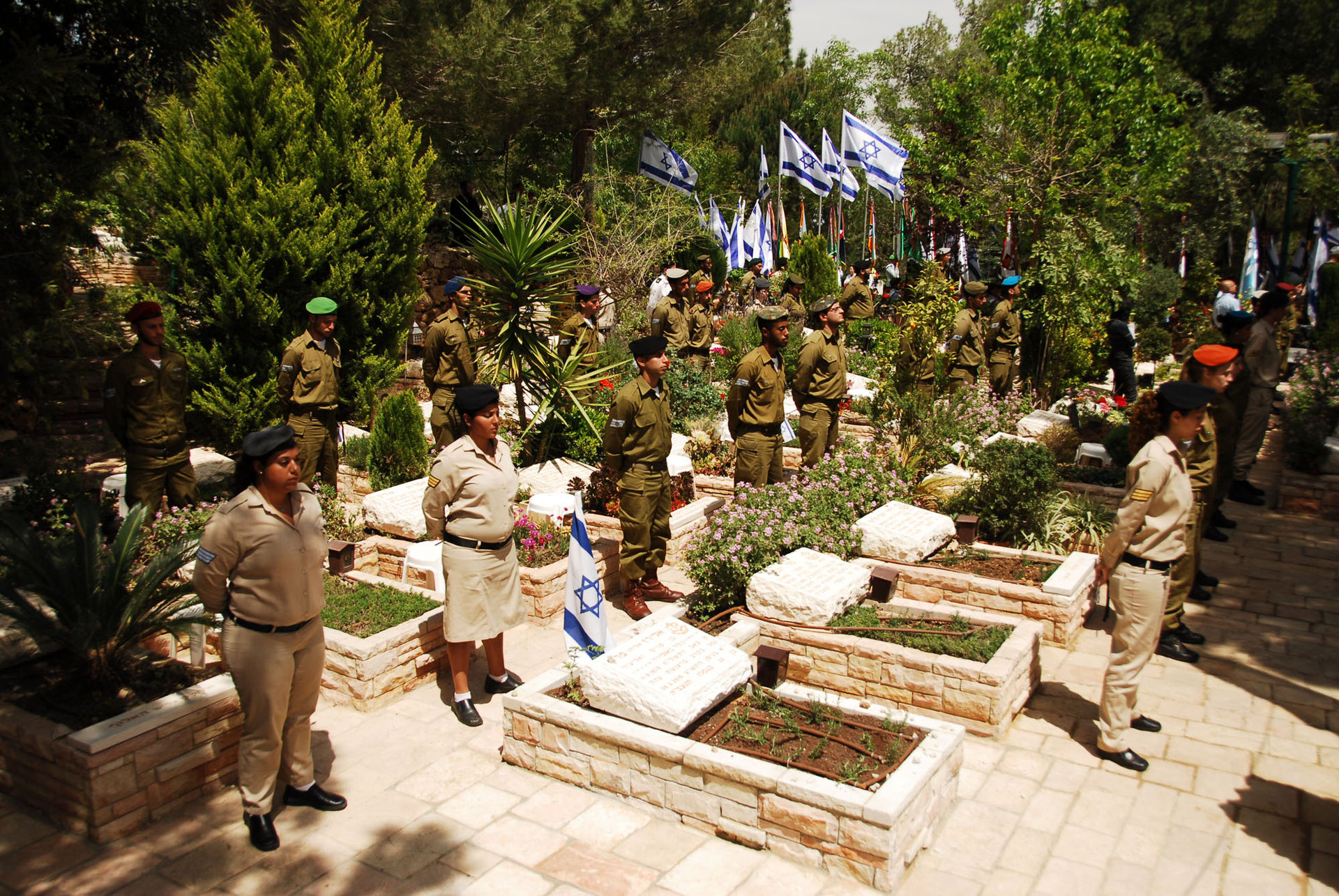 Israel’s National Military Cemetery is on Mount Herzl (Mount of Remembrance) in Jerusalem. The mount is named after Theodor Herzl (1860-1904) who fought tirelessly to establish a Jewish state. His tomb is at the highest point in the cemetery. The Mount Herzl Cemetery is for Israel’s fallen soldiers, leading politicians, and national heroes. Ceremonies are held at the cemetery on Independence Day, Holocaust Remembrance Day, Memorial Day for Israel’s Fallen Soldiers, Memorial Day for Victims of Terrorism, and Memorial Day for missing fallen soldiers. A walk through the cemetery gives you a true understanding of the sacrifice made to establish and protect the Jewish nation.

Establishment of the Israel National Cemetery

In 1934, Zionist leader Menahem Ussishkin attempted to create a burial site for Jewish leaders. He had the body of Zionist activist Leon Pinsker moved to Mount Scopus. The dream of a national cemetery was born. But the occupation of Mt. Scopus by the Arab Legion 1948 made Mt. Scopus an impractical location. Herzl died in Germany in 1904 and had asked for his body to be transferred to the Land of Israel when the Jewish people eventually got their own country. And so, in 1949, his remains were brought to the Holy Land and reburied on a hill facing the Mount of Olives. The government renamed the mount in his honor–Mount Herzl. Soldiers who fought and died in the 1948 Israeli-Arab War were the first soldiers to be buried on Mount Herzl. The Mount Herzl National Cemetery officially opened in 1951. According to Herzl’s wishes, most of his family is buried on Mount Herzl, including his parents, sister, and two of his three children.

The cemetery’s Great Leaders of the Nation section is the burial site for five Israeli prime ministers-Golda Meir, Levi Eshkol, Yitzhak Shamir, Shimon Peres, and Yitzhak Rabin who is buried alongside his wife, Leah. Israeli presidents and select members of parliament are also buried in this section of the cemetery. Nearby is The Leaders of the Zionist Organization section. Some well-known political leaders buried on Mt. Herzl include iconic Jerusalem mayor, Teddy Kollek, Chaim Herzog, and Ze’ev Jabotinsky. You won’t find all deceased Israeli leaders on Mt. Herzl, as some are buried elsewhere.

The Victims of Acts of Terror Memorial honors all victims of terrorism in Israel since 1851. There is a memorial for Jewish underground fighters and a memorial for the last generation of Holocaust survivors who died defending Israel. There is a common grave for 204 Jews who went down with the Salvador immigrant ship in 1940. And a common grave for the 44 Jewish Moroccan immigrants who died on the Egoz in 1961. Another memorial honors deceased Jewish immigrants from Ethiopia. There are individual memorials for fallen soldiers from each war and some important battles. For example, the memorial for soldiers who died in the Battle of Latrun (1948); the soldiers who fell during Operation Kadesh (1956), and the soldiers who lost their lives in the First Lebanon War (1982). There are also plots for fallen soldiers from the Six-Day War, the Yom Kippur War, and soldiers who have fallen since 1990.

Each Grave Tells a Story

Each memorial could spark your curiosity, and each gravestone has a story to tell. Fascinating memorials honor Jewish soldiers who fought in the Red Army in World War II and the Jewish soldiers who died fighting in the Polish Army in WWII. The Tomb of the Unknown Soldier and Garden of the Missing in Action honor soldiers who have died since 1914, and whose resting places are unknown. There is also a memorial for the 69 soldiers who died on the Dakar submarine in 1968, and whose bodies were never recovered. All fallen Israeli soldiers are honored, including Christian, Muslim, and Druze who have lost their lives serving their country. Soldiers are buried side-by-side, with identical size and shaped headstones, regardless of rank. The gravestones bear only the soldier’s name, rank and place, and date of birth and death.