The Second Temple was a sacred Jewish place of worship on Temple Mount in Jerusalem from 520 BC to 70 AD. Temple Mount was the site of the First Temple until 586 BC; the Second Temple and today is the site of the Dome of the Rock and Al-Aqsa Mosque. The Temple represented a divine presence on Earth and the place where heaven and Earth meet. Only in the Holy Temple could sacrificial worship be performed in accordance with the codes of the Torah. Construction of the Second Temple is referred to in the Book of Ezekiel; Ezra 1:1-4 and Chronicles 36:22-23.

History of the Second Temple

Fifty years after Babylonians destroyed the First Temple in c.587 BC they were vanquished by Persians. King Cyrus II of Persia gave permission for the Temple to be rebuilt. Under Governor Sheshbazzar attempts were made to start the project. Only in 522 BC when Zerubbabel became governor was work on the Temple continued by exiled Jews returning to the Levant from Babylon.  Construction of the Temple continued in 521 BC under Persian King Darius I.

Two Jews from Judea, Ezra and Nehemiah were a major force in the reconstruction. This early modest version of the Second Temple was completed in 516 BC. In the following years, the Jews and Palestine were ruled by the Persians, Greeks, and Romans yet they continued to keep their faith and worship at the Temple.

In 163 BC the Greek ruler Antiochus erected a statue of Jupiter on the altar of the Temple. For three years the Temple was profaned in this way until the Jews revolted. It was at the end of the Maccabean Revolt (167-160 BC) that the story of Hanukah unfolded. Storming and retaking the Temple the Maccabees found only a small jug of blessed oil to lite the Menorah.

A miracle occurred and the oil lasted seven days until new oil could be obtained to light the Temple’s Menorah. During a brief period of Jewish rule by the Hasmonean Kingdom (140 BC-116 BC) the Temple was refurbished. Starting in 20 BC Herod took it upon himself to extend and refurbish the Temple complex although maintaining the character of Zerubbabel’s Temple.

He undertook several mammoth building projects in Palestine wanting to cement his place in history. The Second Temple was his masterpiece. This final version of the Temple is the one we remember today as a grand, elaborate complex. The biblical story of Jesus clearing the Temple of money changers took place at the Second Temple on Temple Mount.

Destruction of the Second Temple

The Temple stood for 420 years from 349 BC to 70 AD. Jews across Palestine began to revolt against the Roman authorities in 66 AD. Jews were drawn together to fight their common enemy. The Romans led by Titus decided to aim at the heart of the Jews – the Temple. The Jews were outnumbered and defeated. Later the Romans built a pagan temple on the site of the former Second Temple.

Features of the Second Temple

At its height, the Temple covered 450 acres and was 100 cubits (about 45 meters) tall. The Roman historian Josephus described the Second Temple as have in 10 entrances; several courtyards; ritual baths; a place for sacrificial animals and the Holy of Holies. Among the features of the Temple there was the golden Menorah; a golden altar for incense; and the heart of the Temple – the Holy of Holies (Kodesh HaKodashim) or the Inner Sanctum. 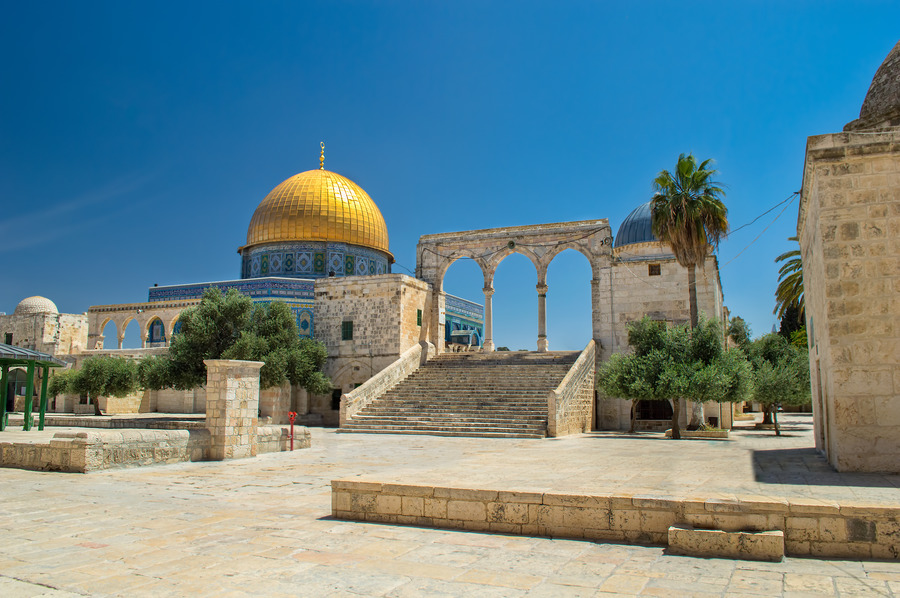 Temple Mount & Dome of the Rock Tour from Jerusalem (MP)