The Church of the Holy Sepulcher (also called the Church of the Anastasis, All-holy Church of the Resurrection) is the most sacred Christian site in the world. The church is located in the Christian Quarter of the Old City of Jerusalem. The Church encompasses the last four (some say five) Stations of the Cross along the Via Dolorosa. These holy sites were where Jesus was crucified at Golgotha (Calvary); died on the cross and was laid to rest in a burial cave. It is also where he was resurrected three days after his passing. The church has been a pilgrimage site since the 4th century and today the Sepulcher is visited by Christians and non-Christians from across the globe.

Brief History of the Sepulcher Church

In the 4th century Helena, mother of Christian Roman Emperor Constantine traveled to the Holy Land. She set about identifying religious sites and having churches erected to mark these sacred places. It is said that Helena rediscovered Jesus’ tomb and the “true cross”. Two connecting churches were built – one above the tomb and the other around the traditional hill of Golgotha. The church was consecrated in 335 AD. The structure of the church has changed and been extended over the years. It has suffered from human destruction, earthquake and fire. Major rebuilding took place in the 11th century and the early 1800s. Elements of Byzantine, medieval and Crusader architecture can clearly be seen in the structure.

Control of the church is shared primarily by the Greek Orthodox, Roman Catholic and Armenian Apostolic with the Coptic Orthodox, Ethiopian Tewahedo and Syriac Orthodox churches playing a lesser role. Although the Anglicans and Protestants have no permanent role in the running of the Holy Sepulchre it remains a sacred site for all Christians. The church holds many small altars, shrines and magnificent artwork. It is a cavernous structure that can hold up to 8,000 people.

Highlights of the Sepulchre Church

The Place of Crucifixion - A rocky outcrop remains of Calvary where the cross stood. Today visitors can take a small staircase up to the site of the crucifixion. There is a Catholic Chapel of the Nailing of the Cross (Station 11) and the actual Rock of Calvary (Station 12). Through a small window, you can see the Chapel of the Agony of the Virgin (Station 13) where Jesus was removed from the cross. At the time of the crucifixion, the hill of Golgotha would have been outside the city. As the city has grown the site of Jesus’ crucifixion has come within the present Old City walls that were built about 500 years ago.

Chapel of Adam - Back on the ground level you can go beneath the Calvary chapels to the Chapel of Adam. Here there is a piece of the Rock of Calvary and the burial place of Adam.

Stone of the Unction - One of the first sights as you enter the church is this table-size slab of stone on the ground. Hanging above it are ornate lamps donated by various denominations. It was here on this stone that Jesus’ body was prepared for burial. He would have been washed and wrapped in linen according to Jewish burial rites.

Mosaic - On the wall behind the Stone of Unction is a beautiful mosaic depicting the anointment of Christ.

Aedicule - At the heart of the church is the large Rotunda, a circular room with a high dome spanning about 20.5 meters. At the center of the Rotunda is the Tomb of Christ or the “aedicule.” This box-shaped 18th-century structure holds the Chapel of the Angel that leads into the Chapel of the Holy Sepulchre containing Christ’s burial cave (Station 14 of the Via Dolorosa).

There are many other sites to discover within the Sepulcher including first century tombs; the Chapel of St Helena; Prison of Christ; Chapel of the Finding of the Cross; Coptic Chapel and Syrian Chapel. The Holy Sepulchre is the site of regular daily prayer and religious ceremonies by all Christian denominations. It is also the venue for major Christian events including Christmas and Easter. As you approach the entrance to the Church of the Holy Sepulchre notice the “immovable ladder” leaning against one of the upper windows. The ladder has been here since 1757 at least and is not touched due to a lack of consensus between the denominations that control the church. 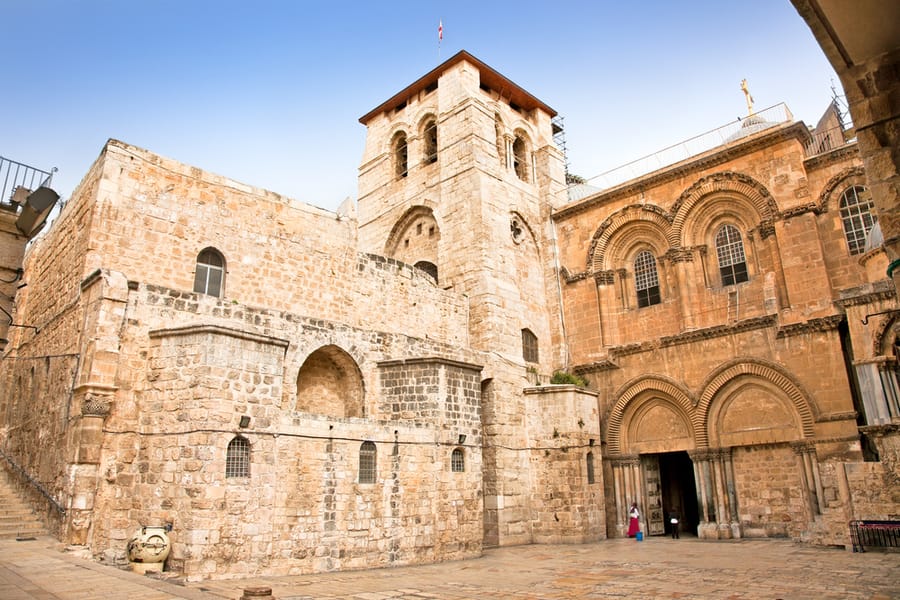