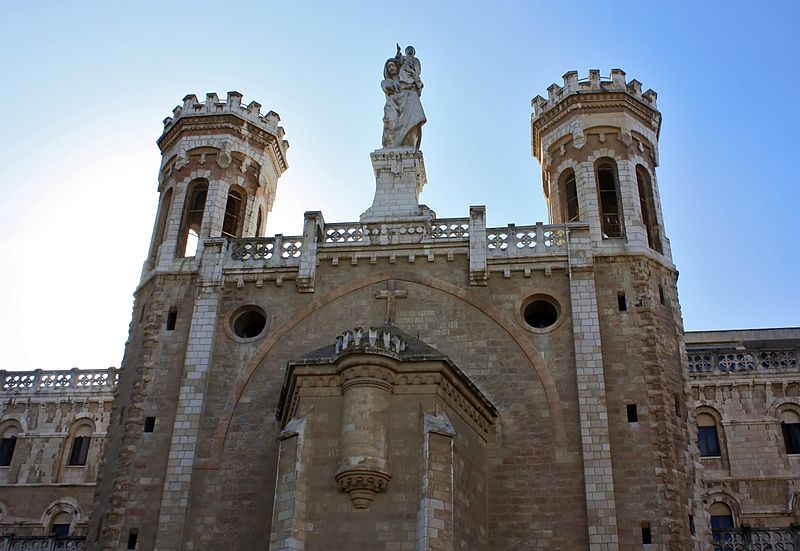 Notre Dame of Jerusalem Center is located just outside Jerusalem’s Old City walls. The building’s history can be traced back 130 years, but today it is primarily a luxury guesthouse. The guesthouse welcomes visitors of all faiths and offers them the services of four restaurants, luxury rooms, services, and the use of the historic chapel. From the Rooftop Cheese and Wine restaurant, there are incredible views across Jerusalem.

History of the Notre Dame of Jerusalem Center

In 1882 French Assumptionist pilgrims decided to build a center that would welcome fellow pilgrims and assist them on their journey. The site was chosen next to the Old City walls, just outside the Christian Quarter, and adjacent to the French Hospital of St. Louis des Francais. The center was built with the help of donations and the cornerstone was laid in 1885.

In 1888 Notre Dame Center in Jerusalem welcomed its first pilgrims. Later in 1893, construction of the center’s chapel began. It took until 1904 to complete the center’s guesthouse and to mark the occasion a large statue of the Virgin Mary was placed above the entrance. The center served as a seminary for future Assumptionists until the First World War. In 1948, during the Israeli-Arab conflict of 1948, the building suffered damage and was unfit for use as a guesthouse or seminary. It became an Israeli guard post, with parts of the property used to house refugees.

The Assumptionists continued to inhabit the central wing but the circumstances became increasingly difficult and eventually, in 1972, the center was turned over to the Holy See. Under the Vatican, the center was renovated and restored to its former status as a refuge for pilgrims. In 1978 it officially became a Pontifical Institute and ecumenical holy place. Since 2004, the center has been run by the priests of the Legionaries of Christ and it continues to serve pilgrims and the local Christian community.

Today the Vatican-owned guesthouse offers a haven for pilgrims and tourists from across the world. The guesthouse is open to the public and offers accommodation in renovated historic rooms with modern conveniences. Guests have access to the chapel and can attend daily mass, special services, and use the chapel for personal prayer. On the rooftop is the Cheese and Wine restaurant, and the Allegro Bistro offers cuisine from the Mediterranean and American kitchens. The center hosts special spiritual and cultural events on a regular basis.

The center is home to a permanent free exhibition on the Holy Shroud of Turin. It features a replica of the Holy Shroud, a model of the crown of thorns, and an in-depth look at the history of the Shroud.

Wish to explore Notre Dame of Jerusalem Center? Book one of our Jerusalem Private Tours.