The Jewish Quarter is one of the four sections within Jerusalem’s Old City walls. The 0.1km² area has been home to Jews since 800 BC and today continues to be inhabited by about 2,000 Jewish residents. The Quarter can be entered via the Dung Gate and is bordered by the Armenian Quarter, the Street of Chains and Temple Mount. The Jewish Quarter is a lively residential neighborhood and tourist attraction with restaurants, stores, hotels, hostels and museums.

There are also many Yeshivot (schools for Jewish religious study) and synagogues. Like the rest of Jerusalem, the Quarter radiates light off the stone buildings and stone-paved lanes.
When the Jordanians took the Old City in 1948 many of the ancient buildings were destroyed. Since 1967 when Israel reclaimed the Old City reconstruction and excavation have been ongoing. Almost the entire Quarter has some kind of archaeological treasure beneath it. In fact, there are two or three levels buried beneath the surface and most of the buildings have documented excavation sites in the basements!

Among the archaeological remains, there is Hezekiah’s Broad Wall, a 7-meter wide wall that formed part of the ramparts in the First Temple Period (957 BC-587 BC).  A Herodian complex of mansions from the Second Temple Period (530 BC-70 AD) has been uncovered five meters below ground level. Visitors can see the remains of homes that belonged to the rich and powerful of that period.

The Hurva Synagogue was originally built in the 1700s but was repeatedly destroyed over the years. In the 2000s the Hurva Synagogue was restored to the way it appeared before its last destruction in 1948. A complex of four Sepharadi Synagogues has also been rebuilt.
Additional attractions in the Jewish Quarter include the Byzantine Cardo, once the main street that ran through the city as early as 130 AD. This thoroughfare was flanked by columns supporting covered walkways. You can see the excavated Cardo and even shop in the stores that now fill the Cardo bazaar built in the 12th century by the Crusaders. Other Jewish Quarter attractions include the remains of the Byzantine Nea Church, a large structure that stood at the southern end of the Cardo.

The Burnt House is a Jewish Quarter museum in an excavated Second Temple Period house. Batei Mahse is a 19th-century residential compound originally built for poor Jewish families to live rent-free. At Alone on the Ramparts Museum, you can see a photographic exhibition depicting the events of the Jordanian attack and capture of the Old City in 1948.

The Israelite Tower was part of a defense system devised by the Jews during the First Temple Period. The Archaeological Park Davidson Center holds a display of artifacts and architectural elements found in excavations within the Old City. Some of the earliest findings date back to the 10th century BC and include a tower, gatehouse and city walls. At the Davidson Center visitors can go back in time to the Second Temple Period through a 3D model of Temple Mount.

The main attraction of the Jewish Quarter is undoubtedly the Wailing Wall (also known as the Western Wall and the Kotel). The Wall is the only surviving part of the original Second Temple. As the most revered Jewish site in the world Jews (and gentiles) come from all corners of the Earth to pray at the wall and place a prayer note between the ancient stones. The section of the wall that opens up to an expansive plaza is actually only a small section of the original Temple’s outer retaining walls. Below ground, even more of the Kotel has been excavated and it is possible to tour these subterranean sections through the Western Wall Tunnels. 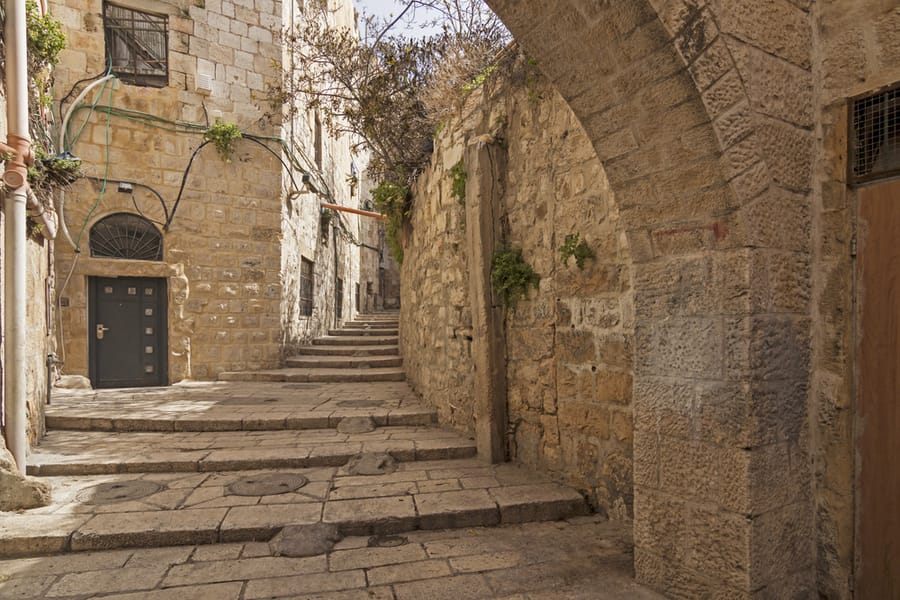