The Garden of Gethsemane is planted at the foot of the Mount of Olives facing the Kidron Valley and Jerusalem’s Old City walls. The name of the garden is Hebrew for “oil press” and the garden is planted with olive trees, some dating back hundreds of years. The trees are still harvested for their olives each year just as they were in biblical times.

Some of the olive trees you can see today in the Garden of Gethsemane are more than 900 years old. Archaeologists and botanists have studied the garden’s olive trees and concluded that they may have been here when Jesus visited the garden. 2000 years ago the garden would have been an olive grove with an olive press nearby.

The Garden of Gethsemane in the Bible

In the Gospel of John, we read of how Jesus came here to pray in the Garden of Gethsemane with his disciples after the Last Supper. It was here that Jesus was betrayed by Judas and arrested by the Romans. In the garden, Jesus agonized over the fate he knew awaited him. For this reason, it is also called the site of the Agony in the Garden or the Agony of Christ. Jesus would have known the garden well. It lies on the natural route between the Temple Mount and the village of Bethany and he would have often retreated to this olive grove in prayer and contemplation.

The Bible tells us that Jesus was familiar with the garden which made it easy for Judas to seek him out and direct the Romans to arrest him. “…a place named Gethsemane and he (Jesus) said to his disciples, stay here while I pray…” (Gospel of Matthew). “Jesus’ anguish at Gethsemane was so deep that his sweat was as drops of blood falling to the ground.” (Gospel of Luke)

The Garden of Gethsemane is identified as the site where Christ went with his disciples on the eve of the Last Supper to pray before his arrest and subsequent crucifixion. Although the garden is best known as the place where Jesus prayed on the eve of his arrest it is also the site of Mary’s dormition and assumption. The Eastern Orthodox Church teaches that the Virgin Mary died in the Garden of Gethsemane. Mary’s Tomb is within a 12th-century church nearby. The church bears beautiful murals which tell of Mary’s death and burial by the disciples.

This church was constructed in the 1920s and features precious floor-to-ceiling mosaics depicting biblical scenes from the Garden of Gethsemane including Jesus praying and Judas’ betrayal of Jesus. There are alternate sites where Jesus might have prayed on the night of his arrest.

Where is Gethsemane located?

Next to the Church of All Nations, there is a garden where the “Rock of the Agony” is located and this is a possible location of the Garden of Gethsemane. The Eastern Orthodox Church holds that the garden was near the Tomb of Mary; the Greek Orthodox Church believes it was further east and the Russian Orthodox consider the orchard next to the Church of Maria Magdalene to be the true Garden of Gethsemane.

The Grotto of Gethsemane

By the 4th century AD, the garden had become a pilgrimage site, and although alternate sites have been proposed, the present site we call the Garden of Gethsemane fits the biblical description. Within the garden, you can see the Grotto of Gethsemane (also called the Cave of the Olive Press) where Jesus and his disciples may have slept.

The 190m² cave has not altered since Jesus spent time here. You can still see where a hole in the wall held a wooden beam used in the process of pressing olives. Today the grotto is used as a chapel. Nearby is the Tomb of Mary where the Virgin Mary, mother of Jesus is said to have been buried.

The Church of All Nations

On the edge of the garden stands the Church of All Nations (The Basilica of the Agony) built around the rock where Jesus prayed on that fateful night. The church was designed by Antonio Barluzzi and built in 1924 with funds from Christian communities across the globe – hence the name. The church is recognizable by its stunning gold and colored tympanum mosaic above the entrance depicting Jesus, his followers, and disciples.

Part of an earlier Byzantine church that stood here in the 4th century has been incorporated into the structure of the church. In the church, you can see part of the Byzantine mosaic floor and the rock where Jesus prayed.

The Garden of Gethsemane is a must-see site for Christian visitors; even visiting Popes have spent time in the garden and planted olive trees. On Holy Thursday during Passion Week pilgrims gather to pray in the Garden of Olives and led by the Franciscan Custos they make their way in a procession to the Church of Saint Peter in Gallicantu on Mount Zion where Jesus spent the night imprisoned after his arrest. To explore more of Jerusalem and visit the Garden of Gethsemane, Join our Jerusalem Old City Tour. 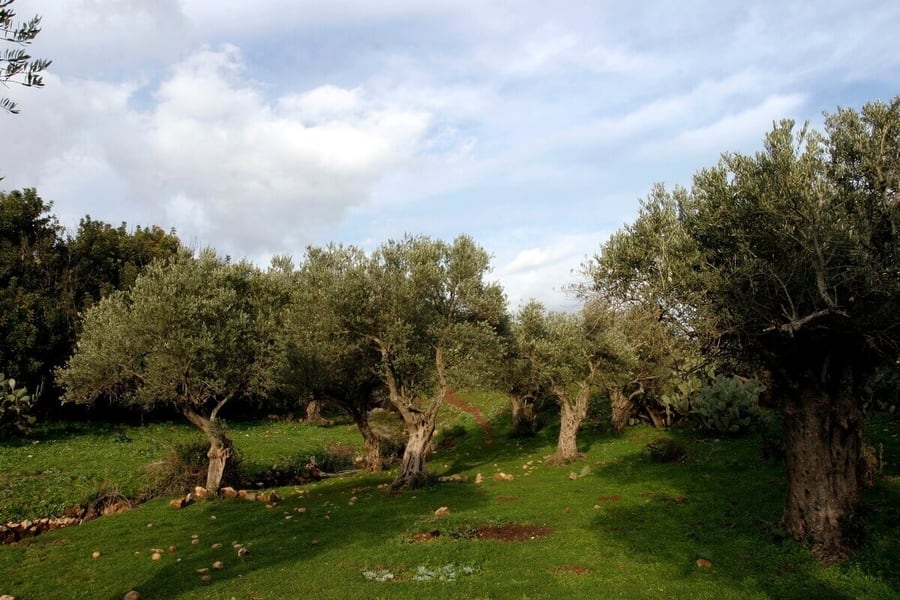