The Via Dolorosa follows the path Jesus walked through the streets of Jerusalem, from the place of his trial to the place of his crucifixion. Jesus was brought before Pontius Pilate to be judged and condemned near where the Old City’s Lion Gate stands today. After being judged Jesus carried the heavy cross through the crowded streets to where he would be crucified. Crucifixions were made outside of the city walls whereas today Golgotha, the site of Jesus crucifixion lies within the Old City and within the Church of the Holy Sepulchre.

The Stations of the Cross

Along the route, Jesus stopped at 14 points which are remembered today as the Stations of the Cross. Most of the stations are recorded in the New Testament and others were added over the years. Each station is marked along the Via Dolorosa by a plaque or mark in the stone walls that flank the route. Several of the stations have small chapels nearby commemorating the Biblical events.

In the early years of Christianity after Christianity was legalized in the 4th century, it became customary for pilgrims to retrace Jesus’ route along the Way of Sorrow. The route has been altered several times over the years. The present “Fourteen Stations of the Cross” were set sometime after the Crusader period (13th century) and are all within the walls of the Old City of Jerusalem.

In the 16th century the route was given its name, the Via Dolorosa (The Way of Grief in Latin) and today the Via Dolorosa or Way of the Cross lies on the route followed by Byzantine pilgrims. The significance of the Via Dolorosa and the proximity to where the actual events took place makes this pilgrimage site a deeply moving destination for Christians.

Walking the Via Dolorosa

Today the Via Dolorosa runs along lively Old City market lanes flanked by ancient stone walls. Christian pilgrims follow the Way of the Cross praying at each of the stations and tour guides lead groups along this sacred route. Some religious groups walk the Via Dolorosa passing a heavy wooden cross from one to the other.

To walk the Via Dolorosa and follow Jesus path, join our Jerusalem In the Footsteps of Jesus Tour. 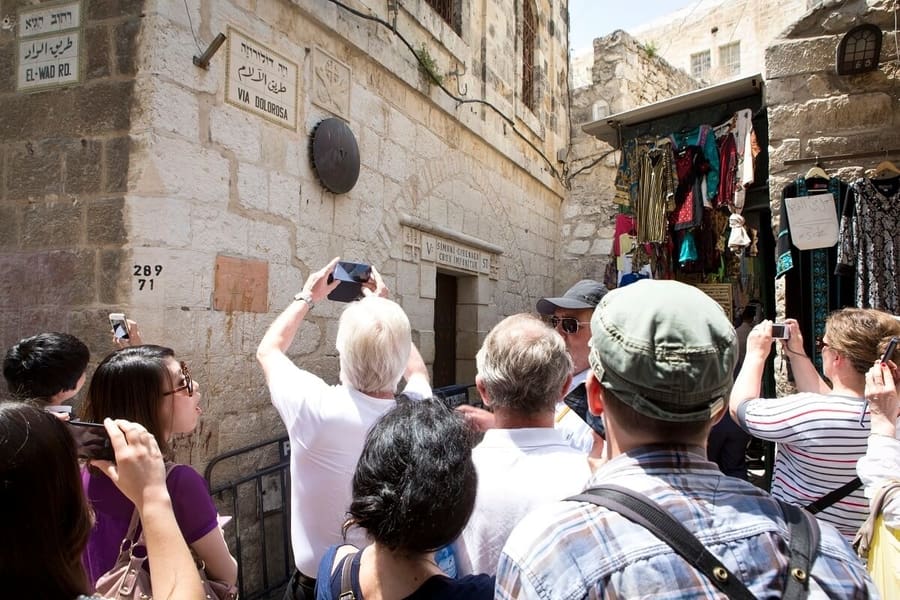