The Hecht Synagogue is located in the Faculty of Humanities on the Hebrew University Campus of Mount Scopus, Jerusalem. The synagogue is famed for its architecture and a breathtaking view over the Old City and Temple Mount with the stunning gold Dome of the Rock.

Founders of the Hecht Synagogue, Jerusalem

The construction of the synagogue was funded by the Hecht family in memory of Mayer Jacob Hecht (1928-2006). Jacob Hecht (better known as Chic) was the US Republican Senator of Nevada (1983-1989) and the US Ambassador to the Bahamas (1989-1993). The Hebrew University had existed on Mount Scopus since 1925. From 1948 to 1967 the university was in an UN-protected Israeli enclave in the Jordanian-administered territory. During this time the campus had deteriorated and following the Six-Day War in 1967, there was a push to restore and revitalize the university with the help of donations.

Tootie and Marty Hecht were at the university visiting their son Alan, a student at the time when they were asked whether they would like to make a contribution to the reconstruction of the campus. At first, they were asked to fund the construction of a dormitory but when they heard that there was no synagogue on campus they undertook to raise the necessary $100,000 in matching government funds for the construction of a synagogue. Construction was temporarily halted during the Yom Kippur War in 1973, then plans went full steam ahead with the government in favor of completing the campus and fortifying the site so that Mt. Scopus would never be taken again.

Features of the Hecht Synagogue

The Hecht Synagogue was designed by Israeli architect Ram Karmi and was completed in 1981. It is a minimalist building constructed of white Jerusalem stone and white plaster. It has a fortress-like exterior and inside there are many geometrical angles. The synagogue is best known for the design of the Torah Ark and window. The Torah Ark is split in two, flanking a large picture window with a direct view of the Old City.

Unlike other synagogues where congregations face east towards Jerusalem, the worshipers at Hecht Synagogue face west towards the Judean Mountains, the Old City, and the Western Wall. The seating is in a U-shape facing the large window so that all worshippers have a wonderful view. For even more panoramic views you can go on to the balcony and roof.

The synagogue location and the view of the Old City below conjure up images from the Old Testament. A passage in the Talmud tells how Rabbi Akiva stood on Mount Scopus looking down on the ruins of the Temple. Here Romans camped as they planned their attack on Jerusalem. Since its construction, several important events and services have been held in the synagogue.

In 1990 the wedding of Evgenij Balter and Inga Kosyrskaya took place here. They were both former Soviet "Refuseniks" and wanted to hold the ceremony here to honor Senator Hecht who had played an important role in securing the release of Jews from the Soviet Union. The synagogue has a thriving beit midrash with various religious learning programs, seminars, and activities. The Hecht Synagogue is an orthodox Jewish place of worship but the Hebrew University also has a conservative synagogue (Ramot Zion), Muslim prayer room, and Fellowship of Christian Students. Regular services are held in the synagogue which is open to the public. 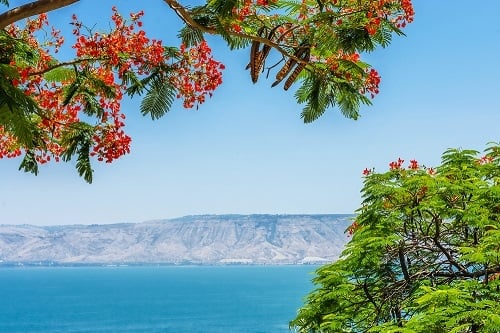