Yad Vashem is Israel’s official Holocaust memorial and museum on Mt. Herzl in Jerusalem. At the end of World War II, information gradually started to surface about the atrocities of the Holocaust. Leaders in Israel discussed creating a memorial to the massacred Jews of Europe. In 1953, the Israeli government passed a law to establish an Institute dedicated to documenting the six million Jews slaughtered in the Holocaust.

The memorial documents the fighters in the ghettos, the partisans in the forests, the soldiers in the allied armies, and the Righteous Among the Nations. When it came to choosing a name for the new memorial museum a Biblical reference was used. The prophet Isaiah tells us that God promised those without children an enduring memorial (in Hebrew: Yad Vashem or literally “a monument and a name”). So for those who lost their lives in the Holocaust without progeny Yad Vashem was chosen as a fitting name for Israel’s Holocaust Museum.

Yad Vashem set about the mammoth task of gathering data about Jews that lost their lives during World War II and the survivors. The names of more than 4.3 million Holocaust victims have been recorded by Yad Vashem so far and they continue to discover more information on Holocaust victims and survivors. Many of the names were gathered from the pedantic German records which provide irrefutable proof of the Holocaust. A large quantity of Yad Vashem data is available online including the recently uploaded trial of Adolf Eichmann.

The extensive grounds of the Holocaust Museum in Jerusalem hold dedicatory monuments, art, and sculptures many created by Holocaust survivors. In the comprehensive museum, you can see screenings of personal video testimonies by Holocaust survivors; authentic artifacts; original documents, and historic photographs.

The Hall of Remembrance holds an eternal flame alongside a lead casket of ash taken from the crematoria. One of the most moving memorials on the Yad Vashem grounds is the Children’s Memorial dedicated to 1.5 million Jewish children who lost their lives. The Valley of the Communities is a maze of enormous blocks each recalling a town, village, or shtetl where Jewish life was wiped out. Computerized information about the 5,000 Jewish communities lost in the Holocaust is available at the museum.

The Hall of Names takes the form of two large cones – one rising 10 meters and a mirroring cone going into the underground rock. A reflective pool of water lies at the bottom of the lower cone. The surfaces of these two cones are covered with photos and “Pages of Testimony” filled out by Holocaust victims. After walking through the emotionally charged Holocaust Museum visitors exit onto a balcony overlooking the Jerusalem Forest and mountains. This beautiful vista is symbolic of the hope we have for the future.

Want to explore Jerusalem's old city and visit the Yad Vashem Museum? Join our Jerusalem Old and New Tour and experience both sides of Jerusalem. 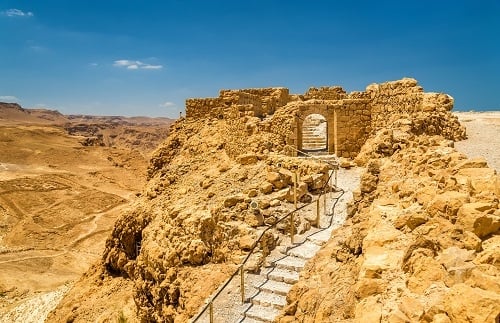