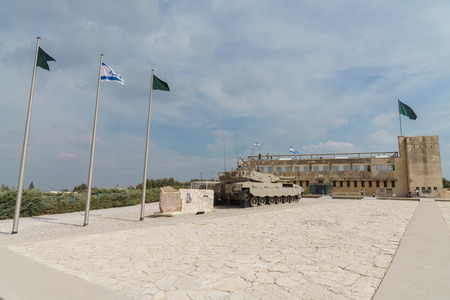 Yad La Shiryon (literally ‘Hand of Armour’) is Israel’s official memorial for fallen soldiers in the armored corps. Located in Latrun, it is set on a hill overlooking the road that runs between Tel Aviv and Jerusalem and is considered to be one of the most varied and informative tank museums in the world.

Its precise location is actually the historic Latrun Police Station (from the time of the British Mandate) in the heart of the Ayalon Valley, which holds great significance for the Jewish people.  In the Old Testament, Yehoshua Bin Nun stated “Sun, stand thou still on Gibeon and Moon in the valley of Ayalon” (Joshua 10), after which his forces defeated the Amorite Kings. In the 1948 War of Independence, Latrun saw many bloody battles, as the Jews fought to break through the siege on the road to Jerusalem (what is now referred to as ‘the Burma Road’). The area was conquered by the IDF in 1967, in the Six-Day War.

History of the Museum

Yad La Shiryon’s founding stone was laid on 14th December 1982 and was the initiative of veteran officers of the armored corp. The idea was to have a complex which displayed the bravery of fallen soldiers and would serve as a place to commemorate them. Today, the museum boasts an armor display, a tank museum, a Wall of Names, a park for family recreation, and the Museum of the Jewish Soldier in World War II (with ongoing exhibitions).

The main building is actually a Tegart fortress from the time of the British Mandate. These first were built between 1938 and 1939 as part of the war against Arab terror. The project was dreamed up by Sir Charles Tegart, a former commissioner of the Indian police, who had fought in Bengal. Invited by the Mandate to advise on security, he recommended building a number of police forts first across the country, to act as well-defined defensive structures, which would help guard positions and prevent the infiltration of guerillas from Lebanon and Syria. The Tegart forts were also used as government offices in certain areas.

Today, if visitors look carefully, they can see the deeply pocketed outer walls were used in wartime. The inside of the tower is covered in steel that came from a tank and water circulating from a pool underneath the installation by Danny Karavan named ‘Tower of Tears’ shows water trickling down the walls.

The Outside Armour Display

Yad La Shiryon hosts an impressive and diverse collection of tanks, made not just in Israel but also in the ex-Soviet Union, the United States, Britain, Germany, and France.  There are more than 100 different tanks in this famous collection, including Merkava (Israel) - meaning ‘ Chariot’ in Hebrew, this is the main battle tank of the IDF and was first used in 1979; M24 Chaffee (USA) - an American tank, used in their war with Korea and by the French in their war against Algeria; M42 Duster (USA) - a light armored air-defense gun built in service in the 1950s and 1960s.

There are also M50 and M51 Super Sherman (USA) - modified versions of the American M4 Sherman tank and used both in the Six-Day War and Yom Kippur War; Centurion (Britain) - the primary British Army battle tank used post-World War II, introduced in 1945, it is considered to be of excellent design and stayed in production until the 1980s Panhard (France) - a fast, long-ranged, and relatively cheap armored car with excellent reconnaissance capability; Panzer (Germany) - developed in the late 1930s and used extensively throughout World War II; T34 (Soviet Union) introduced in 1940, and famously used by the Red Army in World War II Operation Barbarossa.

Tank on the Tower

Without a doubt, Yad La Shiryon’s most famous landmark has got to be the tank that sits on top of a tower.  Indeed, it is so well-known that it actually serves as the logo of the museum. In 1979, after a decision approved by Major General (Ret) Moshe Peled, the tank was hoisted on top of a tower on the site, a tower that used to hold water. The tank hoisted up was an M4 Sherman, from the United States, and it was one of the first tanks ever used by the Israel Defence Forces (IDF).

The water tower was initially designed to hold no more than 25 tonnes and because the Sherman tank weighed 34, both its transmission gears and the engine had to be taken out before it could be lifted up and placed at the top of the tower.

The Tank Museum and the Wall of Names

This museum boasts a collection of models of tanks and armored combat vehicles, including a model of the Leonardo da Vinci tank, a full-scale model of an armored knight, Assyrian and Egyptian chariots, a battle heritage room, a stamp collection, caricatures about the Armored Corps, a library of combat books and a variety of literature relating to combat vehicles. A moving part of the site, on which the names of all fallen soldiers of the Armored Corps who died in Israel's wars are inscribed.

Yad la Shiryon also hosts Shelah (‘Field, Nation, Society’).  This is a branch of the Israeli educational system, whose aim is to turn out well-educated and knowledgeable citizens. The education center is therefore dedicated to the promotion and support of field activities for schools and various youth movements.

It offers a wide variety of facilities for overnight and weekend trips, including camping amongst the pine trees, summer trips, and other youth movement activities. The facility includes dormitories, hot water showers, field kitchens, sleeping quarters for staff, water fountains, and equipment that can be used to erect shelter outdoors.

The Education Center is a project run jointly by the Yad Lashiryon Association, IDF, and the SPNI (the Society for the Protection of Nature in Israel).  It offers an outstanding educational program both for young people and adults, giving them the chance to learn social responsibility, learn more about Israel’s national values and take steps to preserve the country’s natural environment.
On-site facilities are available, including classrooms and dormitories.  It also hosts the International Center for the Study of Bird Migration, equipped with a special radar that looks like a large green ball, which is used to monitor migration at different times of the year.

The visitors' site offers a wide number of facilities which include: 20 classrooms, 2 conference rooms, a 250 seat auditorium which shows films and audiovisual displays about tanks, an amphitheater which can hold 11,000 people used for military and graduation ceremonies for units such as the IDF Land Officers course, a covered patio that can accommodate 500 people, an observational deck on top of the building, offering stunning views of the surrounding area.

It is possible to play laser tag at Yad la Shiryon - either in a group or just arriving and joining other groups informally. Please call the information line in advance, to find out more. Yad La Shiryon is an excellent day out for anyone interested in history, archaeology, battle heritage, and tanks.  There are guided tours in English but these need to be arranged beforehand. Tel: 08-630-7400 or 08 925-5268.

On Israel Independence Day, the museum is open for free and very popular, especially because many of the guides are former soldiers and will happily let younger children climb up onto some of the tanks! There is an onsite restaurant (kosher) which services light refreshments and also a small gift shop.

Public transport: From the Jerusalem Central Bus Station, take line 433 and alight at the Latrun Interchange (approx. 25-minute ride). Walk 10 minutes to the museum. There are no direct buses from Tel Aviv, so consider joining Tel Aviv Region Private tour or travel to Jerusalem first. 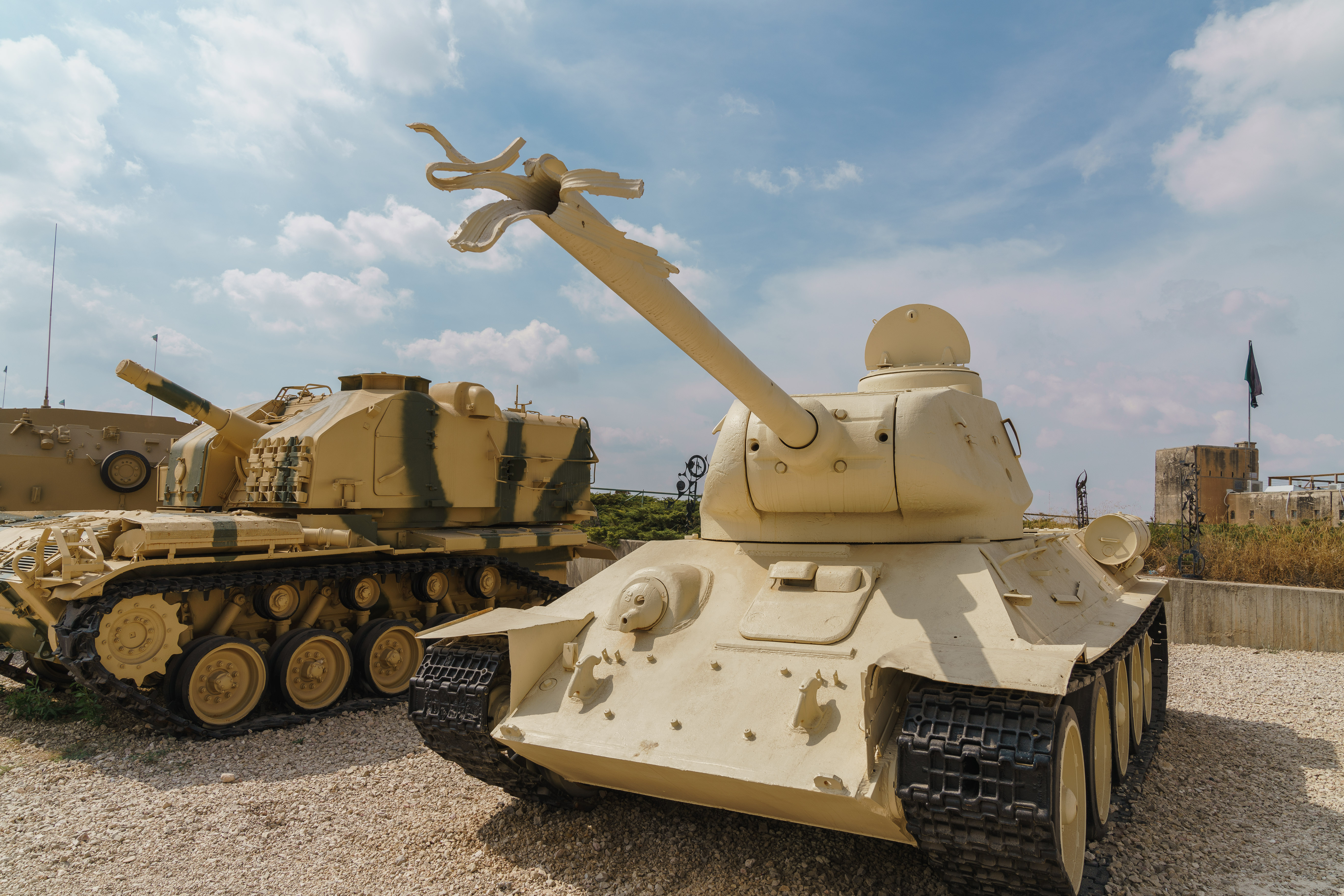