The Roman Catholic Church of St Anne is located in the Old City of Jerusalem. The church stands at the start of the Via Dolorosa and close to the Lions’ Gate, one of the eight gateways through the Old City walls.

The church stands on the site of the Virgin Mary’s birthplace and childhood home where her parents Anne and Joachim lived. The house stood beside the two Bethesda Pools known for their curative powers. The healing waters of Bethesda are mentioned in John 5:2-3. This would have been the same place where Jesus cured a paralytic many years later.

Although the New Testament does not specify the site of Mary’s childhood home it is recorded in the apocryphal Gospel of James written in about 150 AD. In approximately 450 AD a Byzantine church was built on the site and dedicated to Mary. The church was destroyed by invading Persians in 614 AD; rebuilt and again destroyed this time by Muslims in 1010.

The church we see today was built in 1140 AD by the Crusaders and later enlarged by extending the façade forward a few meters. The Muslims took the city in 1189 and the church was converted into an Islamic school of theology. You can see the Arabic inscription above the main entrance. In 1856 the Sultan of Istanbul offered the site to the French in thanks of their support during the Crimean War. The French restored the church and entrusted it to the Missionaries of Africa (White Fathers) who care for the church.

The church is a large stone Crusader structure which stands within a walled courtyard and has a fortress-like appearance. The church has a unique asymmetrical design. Rows of columns don’t stand directly opposite each other; windows are of various sizes and the buttresses have different heights and thicknesses. Within the church compound are the Pools of Bethesda, a museum; the remains of a Roman temple and a Greek Catholic seminary. The acoustics in the church are excellent and the venue is often used for choir recitals.

Join our Jerusalem Old City Tour and go through Via Dolorosa and visit the St. Anne Church. 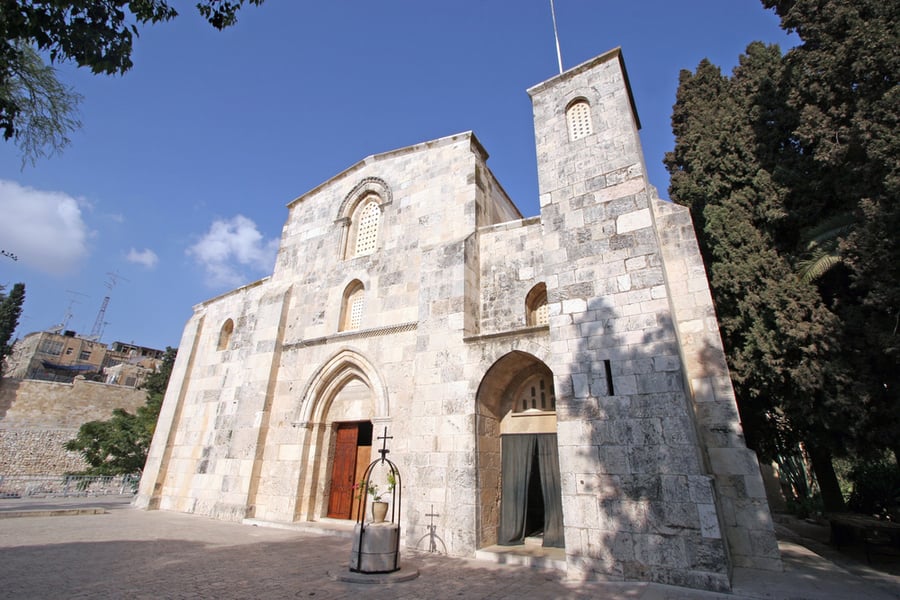