The Church of Dominus Flevit lies on the western slope of the Mount of Olives in Jerusalem. The site is administered by the Franciscan church and marks the place where Jesus looked out across the Kidron Valley to the city of Jerusalem and the Temple Mount. Scripture tells us how Jesus envisioned the future destruction of Jerusalem and wept for the city’s fate.

Where did the Church of Dominus flevit get its name?

Dominus Flevit is Latin for “The Lord Wept.” In Luke 19:42 we read of how Jesus entered Jerusalem on the first Palm Sunday and stood here on the Mount of Olives where he wept as he looked out over Jerusalem. Jesus foresaw the destruction of Jerusalem and the Holy Temple that would come in 70 AD at the hands of the Romans.

Ancient Jewish tombs were discovered on the site where the present church now stands. In the 5th century a Byzantine church was built here and part of its mosaic floor can still be seen. The Byzantine church was destroyed and remained in ruins until the Crusaders built a chapel here.  In the 16th century the El-Mansuria Mosque was built on this site and it has recently been rebuilt adjacent to the church. The Franciscan church purchased the land in the 1900s and commissioned the construction of the present church.

The present church which marks this sacred Christian site was designed by Anton Barluzzi in 1954. The shape of the church resembles a tear drop, symbolizing Jesus’ tears. The most impressive feature of the church is the western window which faces the Old City and Temple Mount beyond. As visitors stand here they can look out over the holy city just as Jesus did almost 2,000 years ago. Beneath the church altar is a mosaic depicting a hen protecting her chicks beneath her wings. This image refers to Luke 13:34: “ Jerusalem… How often I have wanted to gather your children as a hen gathers her brood beneath her wings and you were not willing.”

The Church is highly visited during the Palm Sunday feast. you can retrace the route Jesus took when entering Jerusalem by Joining our Jerusalem Palm Sunday Procession Tour. 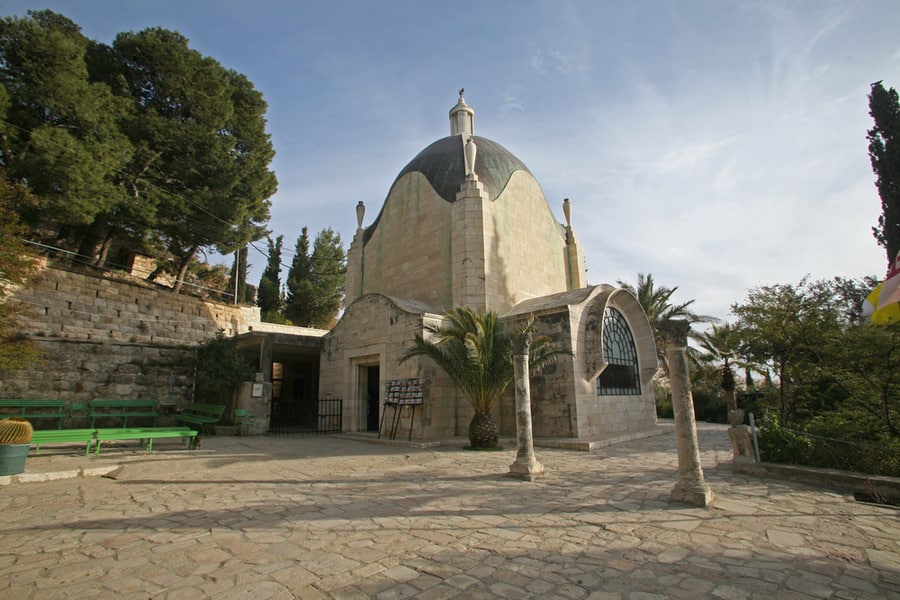