Temple Mount; Har HaBayit; Al-Haram Ash-Sharif (The Noble Sanctuary) or Mount Moriah is a plaza on an elevated area within the Old City of Jerusalem. It is located behind the Western Wall in the southeastern corner of the Old City. Temple Mount is the holiest Jewish site on Earth as it was here that the Holy Temple once stood and where Abraham prepared to offer his son Isaac as a sacrifice to prove his devotion to God. The mount is also sacred to Christians as the Holy Temple is mentioned in the New Testament. The New Testament describes how Jesus was presented at the Temple as a baby and how he was found teaching scholars in the Temple when he was just 12 years old. Later Jesus cleansed the Temple of merchants (Mark 13:2). It is also the third most sacred site in Islam. The site is mentioned in the Koran as the place visited by Mohammed on his Night Journey and where he stepped up into heaven

History and Religious Significance of the Temple Mount

The history of Temple Mount can be traced back thousands of years. The Jewish people believe that the holy inner sanctum or Holy of Holies of the temple that once stood here held the original Ark of the Covenant, a gold chest that enshrined the two stone tablets bearing the Ten Commandments brought down from Mount Sinai by Moses. The Temple was where God’s presence could be felt by all and where people gathered to make sacrifices and pray. Solomon is believed to have built the First Temple (Beit HaMikdash) on the mount in c.833-950 BC.

It was a mammoth, intricate multi-level structure, about the size of a football stadium, and was eventually destroyed by Nebuchadnezzar II in the Siege of Jerusalem (c.587 BC).  The First Temple is described in Deuteronomy 12:2-27. The Book of Ezra tells us of the Second Temple, completed in 515BC and destroyed by Romans in 70AD. In 20BC King Herod the Great made major renovations to the Temple and extended Temple Mount to the north, south, and west creating a compound encircled by retaining walls of limestone blocks.

Since the Temple’s destruction, it has been the desire of every Jew to once again see the Holy Temple reconstructed. This wish is mentioned in prayers and there are many temple-related mitzvoth that can only be performed once the Temple is rebuilt. According to Jewish tradition Temple Mount is the place where the world was created, where it will end, and where the Messiah will appear.

After the Second Temple’s destruction, Temple Mount stood in ruins until the Muslims conquered Jerusalem in 638 AD and the site was cleaned up. The Umayyad Caliphs ordered the construction of the Al-Aqsa Mosque on the southern side of the mount facing Mecca and the Dome of the Rock in the center of the plaza where the original Jewish Holy Temple’s inner sanctuary might have been. The mosque is revered by Muslims as one of the earliest Islamic places of worship. The Dome of the Rock, completed in 692 AD is one of the oldest existing Islamic structures in the world and is said to be built over the Foundation Stone, which was the heart of the Jewish Temple.

The octagonal Dome of the Rock holds the sacred rock of Moriah. The Al-Aqsa Mosque is associated with the Koran passage that describes Muhammad’s miraculous Night Journey that brought him to the “Furthest Mosque.” After arriving in Jerusalem, Muhammad is believed to have ascended to heaven in 621 AD making the Night Journey both physical and spiritual. Temple Mount’s significance in Judaism and Islam has made it a point of contention for many years.

Today the Mount is enclosed by ancient 65m-high walls at the southeastern corner of the Old City. Some of the walls date back to the Second Temple. On the western and northern walls are four minarets built between 1329 and 1622. The Western Wall is in fact a remaining segment of the outer retaining wall of the Second Temple and an extensive section of the wall runs below ground and can be visited through the Western Wall Tunnels.

There are seven entry gates: Non-Muslims can only enter through the Bab al-Magharibeh Gate; there is also the Chain Gate; Cotton Merchants’ Gate; Iron Gate and the Watchman’s Gate. The Golden Gate is sealed and Jews believe this is where the Messiah will enter the city on the Day of Judgment. Once on Temple Mount visitors can see a paved compound with several structures.

The most recognizable is the gold-domed Dome of the Rock; others include the Al-Aqsa Mosque; fountains; Dome of St. George; Dome of the Spirits; arches; prayer niches; domed pavilions; date palms; cypress trees; the Islamic Museum and the Dome of the Chains. The Dome of the Rock is on a raised area reached by a few steps spanned by Mameluke-era stone arches.

Under the present status-quo which has been maintained since the end of the 1967 war non-Muslims are forbidden to pray on Temple Mount but they are permitted to visit at certain hours. Non-Muslims may not enter the Dome of the Rock and there are strict security measures to prevent weapons from entering the compound. Muslims may visit at all hours, entering through all of the gates and may pray. The best, and safest way to visit Temple Mount is with a guided tour. 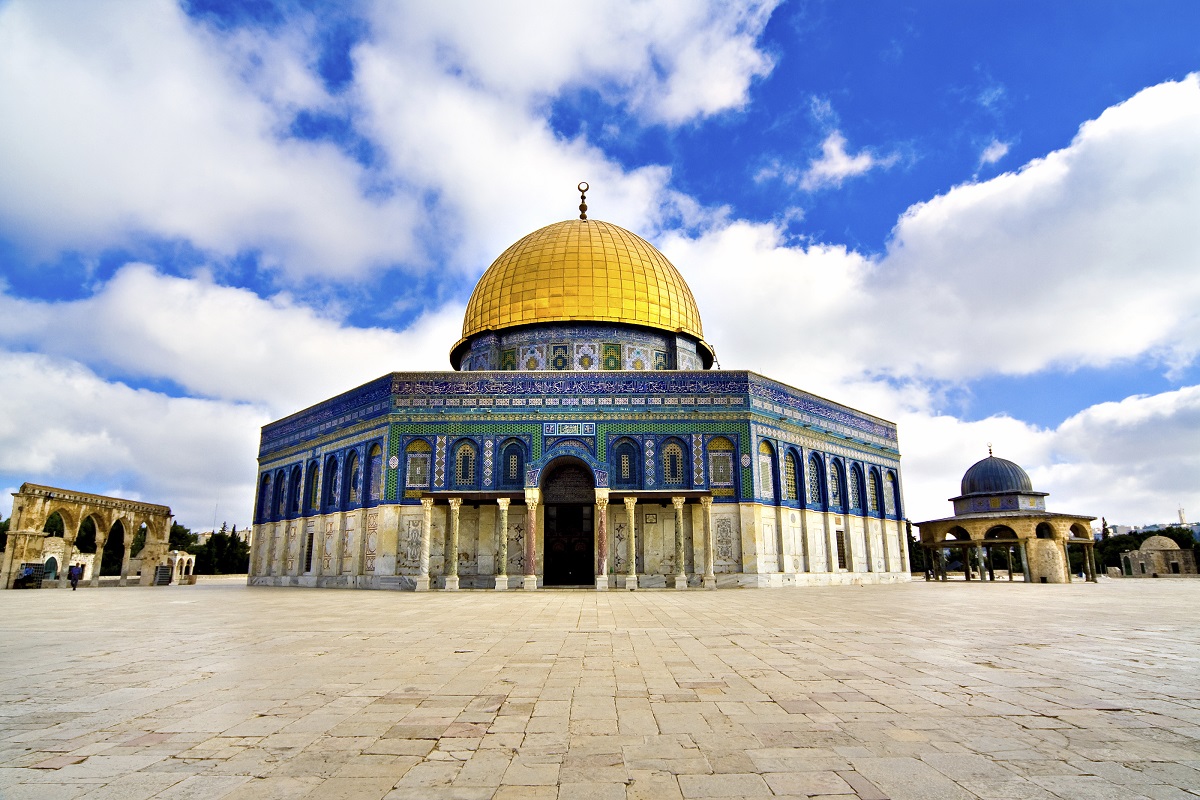