History of the Ramparts

Affording 360-degree views of Jerusalem in two directions - either from Jaffa Gate to Lion’s Gate or Jaffa Gate to ZIon’s Gate - the ramparts (also known as fortifications) the walls of the Old City were built by Sultan Suleiman the Magnificent, ruler of the Ottoman Empire, between 1537 and 1541.  For the most part, his engineers followed the same style of building that the Romans had used, when encircling Jerusalem in the 2nd century.  Today, the ramparts afford 360-degree views of the city, from Jaffa Gate to Lion’s Gate (walking northwards) and Jaffa Gate to Zion/Dung Gate (in the southward direction).

To this day, historians are not entirely sure why exactly Suleiman built these defensive walls.  The military (and more pragmatic) explanation is simple - that the walls were constructed to fortify Jerusalem, making sure the city was protected from enemy invaders.  But there is a second theory - albeit one that is more mystical.  It is said that Suleiman was troubled with nightmares, in which lions were devouring him.  He suspected that this was due to his evil deed and so, as a way to repent for this, he rebuilt the walls of Jerusalem which were, by that time, crumbling anyway.

In the event, the stone walls that you now see today took four years to complete.  Constructed around an area measuring a square kilometer, in total length, they measure 4,018 meters and, on average, stand at 12 meters high.

Around the walls are 34 watchtowers and 7 open gates - Damascus, Jaffa, Lion, New, Dung, Zion, and Herold’s (Flowers).  The Damascus Gate is probably the most famous of these, for centuries acting as a portal to the city.  Walking through it, you are confronted by an open-air bazaar, selling every food and household goods imaginable.  Look carefully and you will also see that, beneath the current gate, are the remains of an earlier gate.  This dates back to Roman times (circa Emperor Hadrian).

There are inscriptions and decorations around many of the gates, and each one is an attraction in its own right.    Above the Jaffa Gate is the inscription “There is no God but Allah and Abraham is his friend.”  This is taken to mean that both Muslims and Jews were equally welcome inside the city.   At the Lion’s Gate, visitors can see decorative lions (which some also believe to be panthers). As pointed out before, the Damascus Gate represents East Jerusalem’s commercial center, complete with a lively and bustling market.

The Old City walls are capped with crenellations, which are ramparts built around the top.  If you look carefully, you will see gaps at regular intervals and there is a military reason for this - they are holes through which arrows could be fired.  Additionally, five parapets exist with floors that contain machicolations.  These were openings through which soldiers could attack advancing enemies - and historians have noted that one of the more unpleasant ways they did this was to be able to throw boiling oil onto enemies and invaders.

Today, it is possible to walk along the ramparts of the Old City, in two directions - one traveling north, from the Jaffa Gate to the Damascus Gate and the other, in a southward direction (which is., arguably, more popular) from David’s Tower to Mount Zion.  Both routes offer spectacular views of the Old City, both inside and outside the walls.  It is also to walk the city in its entirety.  This involves descending from the southern trail at the Dung Gate, walking along the Easter Wall, then climbing back on the northern path at Lion’s Gate, and from there returning to Jaffa Gate.

Let’s look at the two different paths upon which you can walk the ramparts:

This path is longer and covers more area (around 3.5 kilometers in total).  It runs from Jaffa Gate to Lion’s Gate and, from there, it's an easy walk to the Dome of the Rock.  It affords views of the Christian and Muslim Quarters, as well as the Mount of Olives,  As you walk along, you will also see the Church of the Holy Sepulchre, Temple Mount, Santa Anna Church, Rockefeller Museum, and the Kidron (Jehosshapat) Valley.

This walk is easier and shorter - approximately 1.5 kilometers).  It begins at the ‘Migdal David’ (the Tower of David), next to Jaffa Gate, and ends between the Zion and Dung Gates.  From there, the Kotel (Western Wall) is a short walk away.  This path is a good way of drinking in the atmosphere and sites of both the Jewish and Armenian quarters, with their array of beautiful old buildings. Look carefully and you will see the stables of the Israeli police - used by the Ottoman, Jordanian and British police over the centuries.

There are points on both walks where you can descend to ground level if you want to do some exploring in the Old City.  It’s important to bear in mind, however, that this is not a walk for older people, anyone who suffers from fear of heights, or families with young children in strollers.  There are points at which the paths are rather uneven, with lots of steps, so a certain level of fitness helps!  Don’t forget to wear a hat and take lots of drinking water too - temperatures can soar in the summer months.

Tickets cost 20 NIS per person (10 NIS per child) and are valid for 2 days, in both directions.  Included in the cost is a free vocal tour (available via a phone App).  Tickets can be purchased online as well as at the information office,  which is situated at the Jaffa Gate Information Desk (but closes at 2 pm on Friday afternoons, because of Shabbat).  Even better, in the summer months, the ramparts tour is open until well after night falls, giving you the opportunity to see the city lit up - a truly memorable experience.

So put on your most comfortable shoes, grab a ticket, and transport yourself back to Roman, Crusader, or Ottoman times, for a chance to witness unparalleled views of an extraordinary city and experience history in a completely unique way. 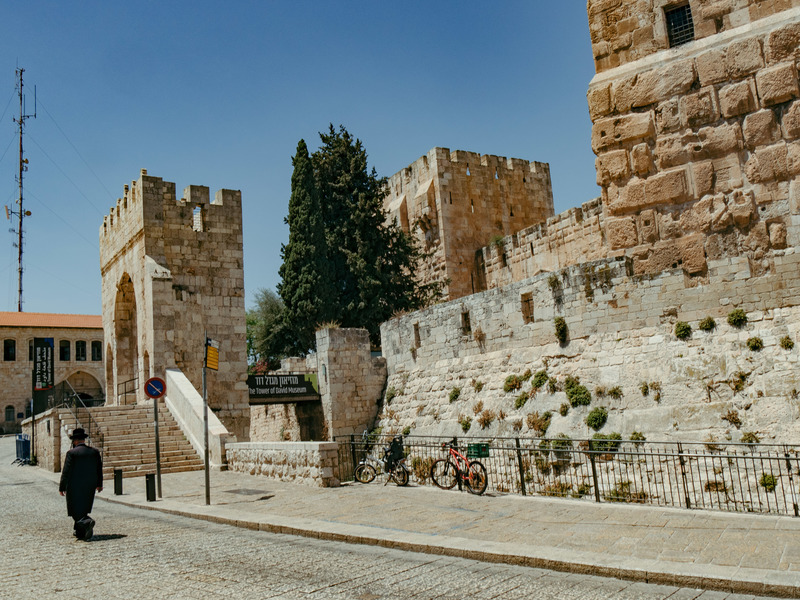