Wadi Qelt is a canyon or gorge in the Judean Desert located in the West Bank southeast of Jerusalem. The Prat Stream gushes through the fertile gorge forming natural rock pools along the way before flowing eastward to the Jordan River, north of the Dead Sea. The stream is fed by the Ein Prat spring at the upper part of the gorge, the Mabo’a spring, and the Qelt spring.

This perennial stream has been an important water source since Biblical times. The Hasmoneans and Romans used aqueducts to channel the precious freshwater through the harsh desert to Jericho and between 1927 and 1970 British-built pumping stations supplied Ein Prat water to East Jerusalem. Remains of the ancient aqueducts and British pumping station can still be seen in the Ein Prat Nature Reserve.

Some believe that Wadi Qelt could have been the “valley of the shadow of death” as mentioned in Psalm 23. It also would have been on the route that featured in Jesus’ parable of the Good Samaritan (Luke 10:29). According to Christian tradition, Wadi Qelt is where the prophet Elijah hid from Queen Jezebel (Kings I 19).

The constant flow of Ein Prat creates a cool oasis of lush vegetation along the edges of the babbling stream that can be enjoyed by hiking through the Ein Prat Reserve. There are several marked hike trails through the canyon that pass the remains of ancient aqueducts, magnificent monasteries, waterfalls, and overflowing rock pools where you can swim. Visitors to the reserve can abseil (rappelling) on the cliff of the northern bank of Ein Prat stream.

The Ein Maboa pool is a unique natural phenomenon. Every few hours the spring’s stone pool empties and refills as the flow of the spring changes. At the lower section of Wadi Qelt canyon is the Ein Qelt spring which flows into a waterfall and natural pool. A trail from the village of Mizpe Yericho leads down to the spring.

Faran or Chariton Monastery was the first of the Byzantine monasteries to be built in the Judean Desert, the Biblical wilderness. It was founded in 330 AD by Turkish monk Hariton who was captured by robbers and held in a cave in Wadi Qelt. When he was miraculously released, he stayed on in the cave, and eventually, the monastery was built on the southern cliff of the canyon.

Monks secluded themselves here, each in solitary cave-like dwellings meeting weekly to pray in the monastery church. The Faran Monastery was destroyed by the Persians in 614 AD and rebuilt towards the end of the 19th century by the Russian Orthodox Church. Eventually, the monastery was abandoned until the 21st century when a chapel and Hariton’s tomb were restored.

One of the highlights of Wadi Qelt is the breathtakingly beautiful Monastery of St George of Choziba (or Koziba) built clinging to the side of Wadi Qelt’s cliffs about 69m above the valley floor. The cliff-hanging Byzantine monastery was established in c.480 AD by John of Thebes.

In 614 AD it was destroyed by Persians and 40 of the monks were murdered. George was a Cypriot monk who survived and continued living in the monastery ruins. After his death, the monastery was named in his honor. Then in the 12th century, the Crusaders rebuilt the monastery which was later abandoned.

In the last 19th century Greek Orthodox monks reclaimed the monastery and have continued to maintain it as a place of solitary prayer and reflection. The monks welcome visitors on guided tours of the monastery. 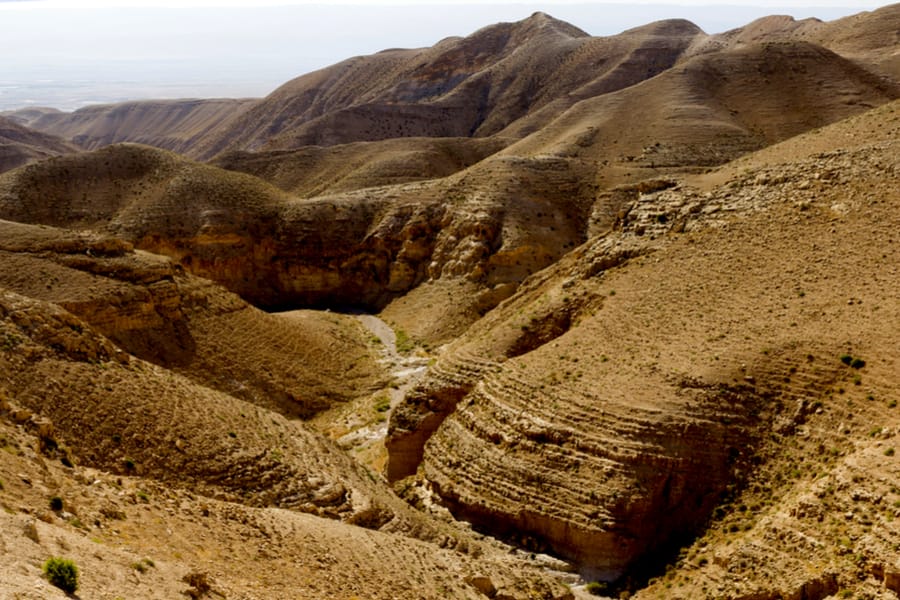