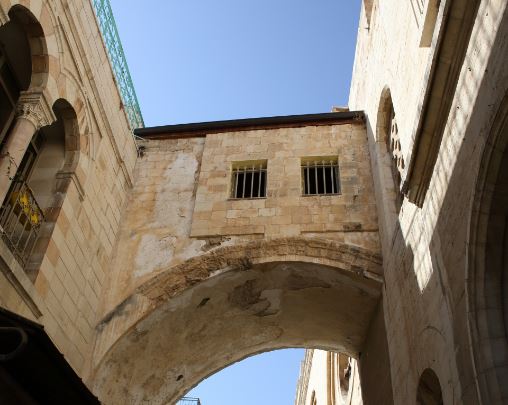 Ecce Homo means Behold the Man in Latin. The phrase is associated with an ancient stone arch that curves over a lane in Jerusalem’s Old City. Traditionally, the Ecce Homo Arch is where Pontius Pilate stood as he presented Jesus to the hostile crowd saying, behold the man. Jesus stood, humiliated, beaten by the Roman soldiers, and wearing a crown of thorns. Soon after, he carried his cross along the Via Dolorosa, towards Golgotha and his crucifixion. The ground beneath the Ecce Homo Arch is steeped in history and religious significance.

According to the Gospel of John (18:28-19:16), these words were part of a speech given by Pontius Pilate. Pilate wanted to satisfy the mob by parading a beaten and whipped Jesus before them. They mockingly placed a crown of thorns on his head, and a purple robe on his shoulders, to dress him as a king. Ironically, the King of the Jews, with his crown and cloak, stood beaten and bleeding. Several times Pilate said, “I find no fault in Him” and “You take Him and crucify Him if you choose.”

In his Ecce Homo speech Pilate was saying, look at this miserable caricature of a king, behold, how could he possibly pose any threat. Experts are not sure what Pontius Pilate really meant with his Behold the Man speech. Either he was trying to distance himself from the unfolding events, or he was hoping Christ would be spared, and that the mob would think the beating was punishment enough. Pilate gave this speech at the market gateway in Jerusalem’s Old City. Part of the gateway where Pilate stood to give this speech, has survived and is known as the Ecce Homo Arch.

Traditionally, the Ecce Homo Arch was the exact spot where Pontius Pilate presented Jesus to the crowds. But archaeologists have proven that the arch did not exist at the time of Christ’s crucifixion. Archaeological evidence shows that the arch dates back to c. 135 AD and was built during the reign of Emperor Hadrian.

This would have been at least a hundred years after Christ’s crucifixion. The arch was the central one of three arches that formed an entrance to a marketplace in Hadrian’s city. There has been plenty of construction and destruction since the year 135, and parts of the marketplace paving and the arched entranceway still exist under and inside nearby structures.

The section of an archway that we can see above the street continues through a wall into the adjacent Convent of the Sisters of Zion. When the convent was built in 1857, the archway was incorporated into the structure. Visitors to the convent can see the northern side arch that frames the chapel altar. The southern side arch did not survive.

The convent also has a small museum dedicated to archaeological remains. Some flagstones from Hadrian’s marketplace are also visible here. Other sections of the ancient marketplace can be seen in the nearby Church of Flagellation and the Church of the Condemnation.

The Christian Tradition of Ecce Homo

Although archaeologists date the Ecce Homo Arch to after Christ’s death, the arch is still the traditional site of Pontius Pilate’s Ecce Homo speech. The area provides the appropriate setting, and the surroundings are fittingly close to the Via Dolorosa to still be a worthy pilgrimage site. 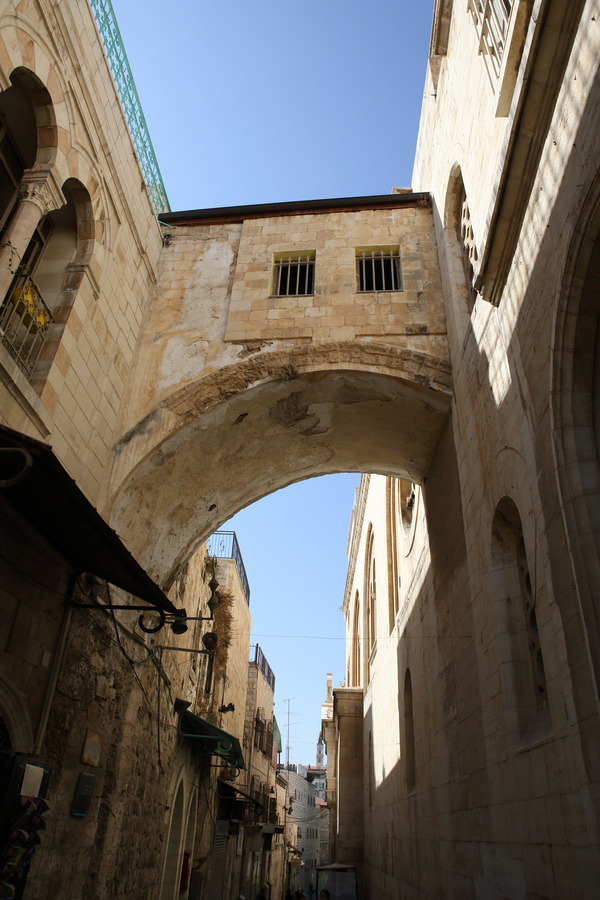