The Pools of Bethesda are mentioned in the Bible as a place where people came to wash in the curative waters and as the site where Jesus cured a paralyzed man. Today the excavated pools are in the Muslim Quarter of the Old City Jerusalem about 50 meters inside the Lions’ Gate (known in the Biblical-era as Sheep Gate, as sheep would be brought into the city through this gate for sacrifice at the Temple). The pools are within a complex with the Church of St. Anne marking the home of Mary’s parents Joachim and Anne.

The pool was originally excavated in the late 19th century but work on the site has continued for more than 100 years. Excavation of the site revealed that the pool was divided by a wall or dam creating two separate basins. A flight of steps leading down into one of the pool basins indicates that it could have been a Jewish ritual bath (mikvah). The second basin would have been used to collect and hold rainwater to keep the mikvah constantly supplied with fresh water. In the Bible the pool is described as having five porticoes, this would suggest a five-sided pool.

The Pools of Bethesda in the Bible

The Bible tells us how the Pool of Bethesda was visited for its healing powers. The first person to enter the water was cured of their ailment. In John, we read how a paralytic had been coming to the pool for the last 38 years but never given the chance to be first in the water. Jesus visited the pool and told the man to “take up his mat and walk.”

History of the Pools of Bethesda

During Jesus’ lifetime, the pool could have been a Jewish ritual bath (mikvah). During the Roman era, medicinal baths were built at the pool site suggesting that the waters were believed to have curative powers as written in the Bible. In the following centuries, the Byzantines and Crusaders built churches and chapel at the site and you can still see remains of these structures.

Want to view The Pools of Bethesda? join a Jerusalem in the Footsteps of Jesus Tour. 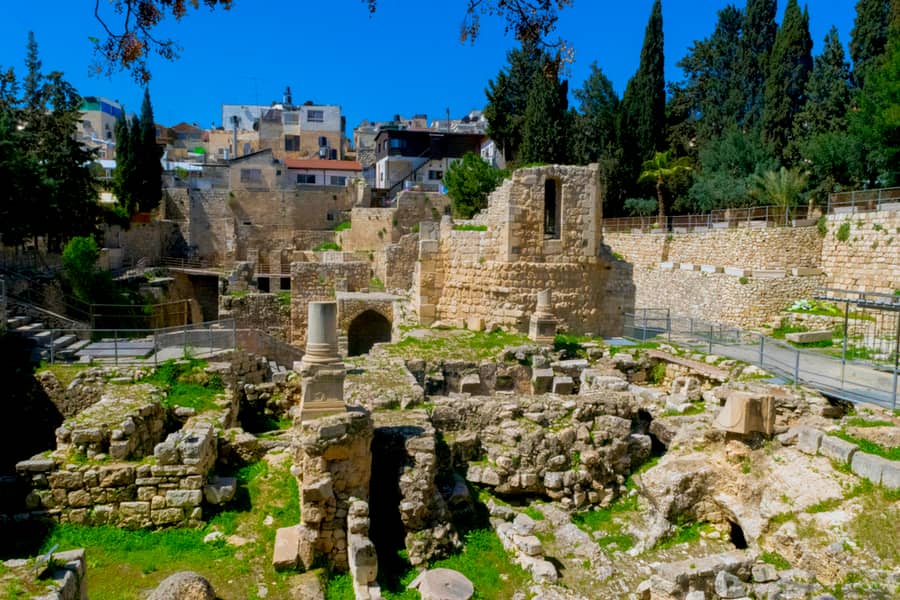