The Fourteen Stations of the Cross are points along the Via Dolorosa, the route Jesus took through the streets of Jerusalem from his condemnation to crucifixion. Each one of the Stations signifies where a particular event took place. Most of these events are recorded in the Bible depicting how Jesus wore his crown of thorns, carried the heavy wooden cross and made his way through jeering crowds along the streets of Jerusalem.

Today pilgrims and tourists can retrace Jesus’ walk along the Via Dolorosa through the modern-day Old City of Jerusalem. The stone-paved streets flanked by stone buildings are very similar to those Jesus would have seen as he followed this route. The Stations of the Cross are marked by plaques, chapels and signs along the way.

1st station of the Cross

The first station marks where Jesus was judged and sentenced to death in the Praetorium of Pontius Pilate also known as the Fortress of Antonia located near the Lions’ Gate of the Old City. It was here that Jesus received his crown of thorns. The place of Jesus’ judgment is now in the courtyard of Madrasa al-Omariye school for boys, the oldest school in Jerusalem.

2nd Station of the Cross

The second station marks where Jesus took up his cross and recalls his condemnation. The station is located opposite the First Station on the grounds of the Franciscan School for Biblical Studies. There are two small churches at this station, The Chapel of the Flagellation commemorating where Roman soldiers beat Jesus and the Chapel of Judgment commemorating the site where Jesus was sentenced.

3rd Station of the Cross

The third station is where Jesus fell for the first time beneath the weight of his cross. This station is not far from the Ecce Homo (Behold the Man), a stone arch that crosses above the Via Dolorosa. It was here that Pilate presented Jesus to the crowds of onlookers. The Third Station is marked by a Polish Catholic church bought by Armenian Catholics based in Poland and paid for by Polish soldiers stationed in Palestine during WWII. Above the church entrance is a relief depicting Jesus stumbling as he carries his cross. This event is not mentioned in the Bible.

4th Station of the Cross

The fourth station marks where Mary watched as her son went by. The 19th century Armenian Church of Our Lady marks this station. The church was built partly over the ruins of a Byzantine church and partly over those of a Mameluke bathhouse. Above the entrance to the church is an image of Jesus meeting his mother and inside you can see a beautiful 5th-century floor mosaic and wall paintings. This event is not mentioned in the Bible.

5th Station of the Cross

At the fifth station, Roman soldiers instructed Simon of Cyrene to help Jesus carry his cross (Luke 23). By this point, Jesus would have been in agony as he dragged the heavy wooden cross. They were approaching the final ascent up Crucifixion Hill and the soldiers saw that Jesus could no longer manage the cross alone. A small hollow in the stone wall at this station is said to hold the imprint left by Jesus and as he rested on the wall. The stone has been touched by pilgrims over the last 2,000 years making the stone smooth. A small Franciscan chapel built in 1895 at the Fifth Station is marked simply by the Jerusalem Cross and the Franciscan Cross. It was here that the Franciscans made their first home in Jerusalem in 1229.

6th Station of the Cross

The sixth station marks where Veronica wiped the face of Jesus with her veil. It is believed that the image of Jesus’ face was impressed on the cloth. This sacred cloth (Sudarium) is housed in St Peter’s Basilica in Rome as a Holy relic. The name “Veronica” may be derived from the Latin – vera icon, meaning true image. Veronica’s home is thought to have been at this point along the Via Dolorosa. Today this station is marked by the Greek Catholic Church of the Holy Face which is part of the Crusader Monastery of St. Cosmos. The chapel was built in 1882 on the remains of a Byzantine monastery. The church ceiling retains its Crusader arches and the church was refurbished in 1953 by architect Antonio Barluzzi.

7th Station of the Cross

At the seventh station, Jesus faltered under the weight of the cross for the second time. It is believed that Jesus’ death sentence was posted here. It could also have been where the Gate of Judgment stood and Jesus left the old city walls of Jerusalem on route to Calvary (Golgotha). At the time Golgotha was outside the city walls and crucifixions were not made within the city. Today a Franciscan chapel marks this station and inside you can see a column that stood in ancient Jerusalem’s main street, the Cardo. This event is not in the Bible.

8th Station of the Cross

The eighth station is where the “daughters of Jerusalem weep for Jesus” (Luke 23, 27). Jesus paused here to consol the women telling them not to weep for him but rather for themselves and their children. At the time of the crucifixion, this station would have been outside the walls of the city. Today the station is marked by a Greek Orthodox church dedicated to Saint Charalampos. Behind the stone wall at this station is a Greek Orthodox monastery. A small and well-worn emblem carved into the wall is inscribed with the Greek word “Nika” (IC-XC-NI-KA) meaning Jesus Christ conquers. Near to the eighth station is a German hospice and above its entrance is the Maltese cross, an emblem of the Order of St. John.

9th Station of the Cross

By the ninth station, Jesus faltered for the third time before his final climb to Golgotha. This is the last station before we enter the Church of the Holy Sepulchre. Nearby is the Coptic Orthodox compound. A cross on a Roman column adjoined to the wall of the Coptic Patriarchate indicates the ninth station. A green door to the left leads to the courtyard in front of the Holy Sepulchre.
The small Coptic Church of St. Helen is dedicated to Emperor Constantine’s mother Helena (c.246-c.327 AD). In the 4th century, Helena uncovered and restored several important Christian sites in the Holy Land including the “true cross” discovered where the Holy Sepulchre stands today. Within the church is an ancient underground water cistern discovered by Helen that is said to provide water to the Holy Sepulchre.

9th-14th Stations of the Cross

Mark 15, 24 tells us how the Roman soldiers drew lots to see who would get Jesus’ clothing. The tenth station is in a room of the Holy Sepulchre called the Chapel of the Franks. The eleventh station is the place of the crucifixion which would have been on a hill (Golgotha/Calvary) outside the city. Today this site is commemorated by a Franciscan altar behind the wall of the tenth station. Jesus died on the cross at the twelfth station. A Greek altar marks this site. Beneath the altar you can see a silver disk with a hole in the middle marking where the cross would have stood.

The thirteenth station is one of the first things you see as you enter the Church of the Holy Sepulchre. The station is marked by a slab of stone (The Stone of Anointment) believed to have been where Jesus was laid out after being removed from the cross. Here he would have been prepared for burial. The Bible tells us that the body of Jesus was wrapped in linen and anointed with oils and spices according to Jewish burial rites.

The 14th Station of the Cross - The Tomb of Christ

The Holiest site in Christendom is the Tomb of Christ that lies at the heart of the Church of the Holy Sepulchre within an aedicule at the center of a large rotunda. Within the aedicule is the Chapel of the Angel that holds a small piece of the boulder that closed Christ’s burial cave. The chapel leads into the tomb itself. It was here that Jesus was buried and resurrected three days after his death. This small rectangular structure (Aedicule) marks the end of the Via Dolorosa. 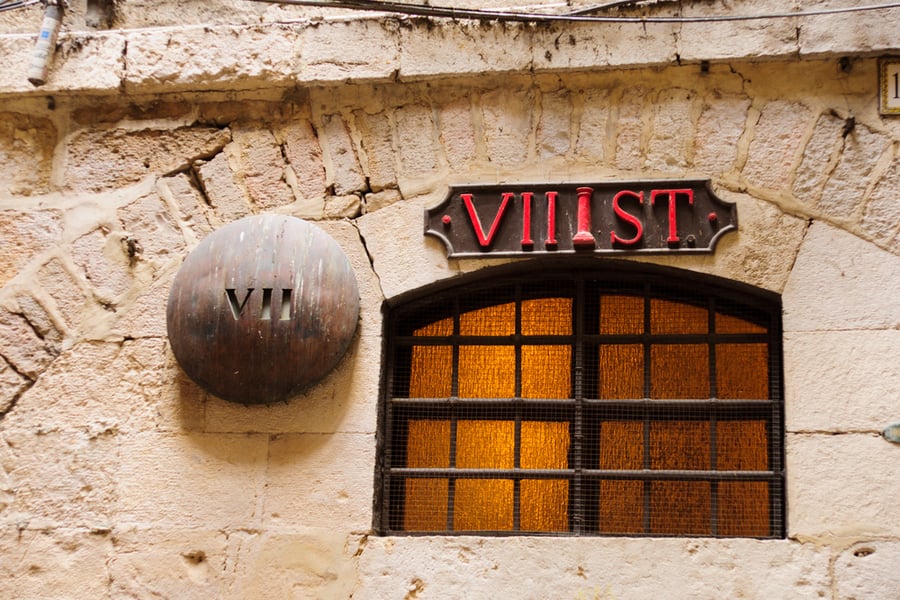