Jaffa Port lies at the southern end of Tel Aviv’s beachfront promenade; it is one of the oldest ports in the world. For over 3,000 years the port has served the Holy Land as a fishing port and welcomed merchants, pilgrims, travelers, conquerors, and immigrants. Jaffa Port has been completely restored and preserved; it is now a picturesque historic area with ancient stone lanes leading down to the water’s edge. Jaffa Port is home to restaurants, cafes, art galleries, and stores that inhabit the restored warehouses and port buildings.

Jaffa is mentioned in ancient works including the Old Testament. During the Canaanite Period (18th century BC) Old Jaffa was already established on the limestone cliff that protrudes into the Mediterranean. From the 15th to 1st century BC Jaffa changed hands several times and was ruled by the Egyptians, Philistines; Israelites; Assyrians; Alexander the Great, and Syria.

Jaffa Port received materials for the construction of King Solomon’s Temple in Jerusalem and Jonah fled God’s command by taking a ship from the port of Joppa (Jaffa) to Tarshish. It was in the 1st century BC that St Peter arriving in Jaffa. In the following years, conquerors continued to come and go; in 636AD Caliph Omar conquered Jaffa and in 1099 the Crusaders took Jaffa.

In 1799 Napoleon captured Jaffa from the Ottomans, although he didn’t stay long in the country. In the 1800s “Jaffa” oranges were shipped across the world from Jaffa Port. In 1917 The British took Jaffa; they built a customs house and expanded the port southward. The British stayed in Jaffa until the establishment of the State of Israel in 1948.

If you look out to the sea you can see Andromeda’s Rock where Greek mythology tells that King Cepheus tied his daughter Andromeda to the rock and Perseus flew down on his winged horse to rescue his love from sea monsters. On the dockside is the Nalag’at Theatre and BlackOut restaurant both run completely by the visually and hearing-impaired community. Also along the port dock are old warehouses that have been renovated and turned into coffee houses, bars, nightclubs, and galleries.

You can still see fishermen plying their trade in the port as they did 3,000 years ago. The port has many exciting eateries and Jaffa has a reputation as a real foodie destination. From May to October, you can enjoy free entertainment and special events on the dockside including live shows, art exhibitions, workshops, outdoor dance classes, and food fairs.

The Jaffa Port underwent a complete facelift in 2012 when it was cleaned up and new businesses moved into the revamped hanger that stands near the water. The dream was to create a food market similar to the ones at Tel Aviv Port and the Sarona complex however the market didn’t really get off the ground. The port failed to become a top destination and is still a hidden gem to most!

As you immerge from the lane which leads down to the port you will be just a few meters from the water. A jetty juts out into the water where you can get brilliant views of the Tel Aviv coast. Local boys like to show off their acrobatic skills jumping off fishing boats into the water and couples often come down here to get their pre-wedding photos taken. After you’ve enjoyed the waterside you can continue exploring the businesses along the water’s edge.

There are several retail outlets including the Women’s Courtyard at The Port where Israeli designer clothing is sold at outlet prices. On Fridays in the summer from 10 am to 5 pm there is live entertainment; market stalls; family activities and yoga lessons all free or for a small fee. The “Almina” Theatre presents children’s theatre productions for a small fee and offers workshop activities for kids after the show. 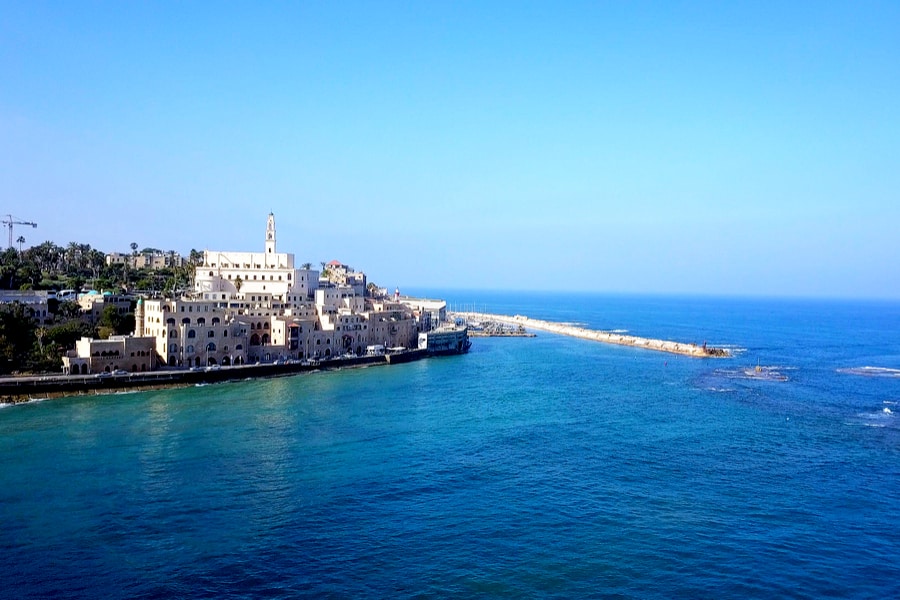