The Bauhaus Center in Tel Aviv is dedicated to the unique Bauhaus architecture that has earned Tel Aviv the name “White City” and UNESCO World Heritage Status. Here you can learn about this style of architecture, and its place in Israel’s history. Tel Aviv is home to approximately 4,000 Bauhaus buildings and is a virtual open-air museum of stunning Bauhaus architecture. The center offers exhibitions, tours, a museum store, and a gallery. If you’d like to delve deeper into the world of Bauhaus design visit the Bauhaus Museum which displays a range of design pieces in the Bauhaus style.

The Bauhaus school of architecture was established by Walter Gropius and operated in Weimar, Germany from 1919 to 1933. Following WWI Europe was reborn, and the art and design world was revolutionized. The idea behind the Bauhaus school was a classless establishment where professionals gave masterclasses. Famous architects, designers, and artists would give lectures at the school including Paul Klee, Marcel Breuer, and Hermann Bayer.

The school offered courses in a diverse range of the arts. The name Bauhaus was derived from the Medieval “Bauhütte”, where artisans working on cathedrals were housed, alongside the building site. The school’s architecture department opened in Dessau in 1927 under Hannes Meyer. The school was eventually closed for financial and political reasons, as WWII approached. Six Israeli architects studied at the Bauhaus school in Germany.

When they returned to Israel during the expulsion of Jews from Germany in the 1930s, the German-trained Bauhaus architects began designing and building in Tel Aviv. The architects made subtle changes to the original Bauhaus style, to suit the Middle Eastern climate and lifestyle. For example, Bauhaus buildings in Tel Aviv are predominantly white to help keep them cool, and this was the origin of the name White City. Israeli Bauhaus-style architecture is generally referred to as the International Style of Modernism.

About the Bauhaus Center

Established in 2000 by Dr. Asher Ben-Shmuel, Dr. Micha Gross, and Shlomit Gross, the center holds a permanent collection of Bauhaus as well as changing exhibits of contemporary art. There is also a short introductory film. The center’s bookstore offers designer goods as well as original Bauhaus items.

The center runs a publishing house that specializes in books on design, Tel Aviv, architecture, and Bauhaus. The Bauhaus center is located at 77 Dizengoff Street in the heart of the White City, not far from Dizengoff Square, also known as Bauhaus Plaza. One of the best ways to explore Bauhaus architecture is to take a guided tour of Tel Aviv. The center provides a map of the Bauhaus buildings in the White City.

About the Bauhaus Museum

In addition to the Bauhaus Center, there is a Bauhaus Museum in Tel Aviv at 21 Bialik Street where you can see Bauhaus furniture, art, and design. The Bauhaus Museum is temporarily closed (as of August 2021), but hopefully, it will reopen in the near future. The single space gallery is housed in a 1934 Bauhaus building in the heart of the White City. 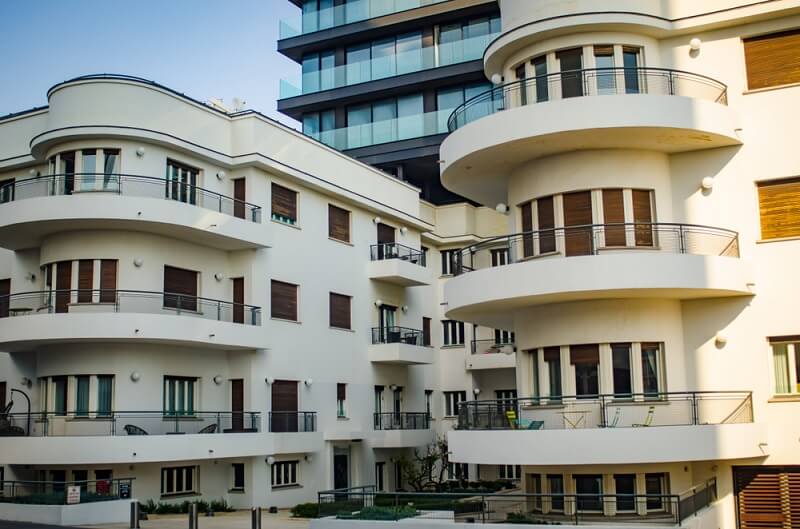