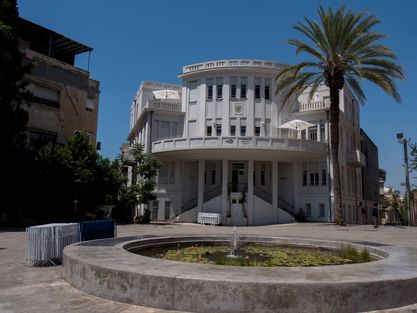 The street intersects with several other main arteries of Tel Aviv, including Allenby Street and Nahalat Binyamin. The avant-garde Yehudit-Bizaron Bridge connects the Montefiore neighborhood with the central business district on Igal Alon Street. The neighborhood is named after Jewish Brit, Sir Moses Haim Montefiore (1784-1885), a philanthropist, financier, and Sheriff of London. His financial and diplomatic contributions supported the idea of a Jewish homeland.

The Heart of Montefiore Neighborhood

Like many parts of Tel Aviv, a lot of Montefiore’s character is determined by the architecture. Montefiore has a mix of classic historical homes that have been restored, neglected houses, modern skyscrapers, and commercial centers.

Montefiore is in the heart of Tel Aviv’s White City, a UNESCO-designated area recognized for its high concentration of Bauhaus and International style buildings. Montefiore Street has sections that look run down, and commercial, but other parts of the street (particularly the lower numbers) hold several outstanding historic buildings.

Points of Interest in the Montefiore Neighborhood

The Montefiore neighborhood is within walking distance of many popular sites including Rothschild Boulevard, Habima National Theater, the Charles Bronfman Auditorium, the Great Synagogue, and the seafront. At the northern end of the street, is Pagoda House (12-20 Nachmani Street) an Eclectic-style building from the 1920s.

On the corner of #40 Montefiore and Karl Neter Street is an impressive house constructed in 1928, and now a preserved landmark. There are some quirky stores along Montefiore Street, including Salon Bagdad at #22. The salon is a collaborative workspace for artists and operates as a gallery, design studio, and event space. For high fashion, stop at #25 and discover the boutique of local fashion designer Ella Levy.

Hotel Montefiore (#36) is a restored, 12-room boutique hotel with an award-winning restaurant. The hotel building was constructed in 1922 in the eclectic architectural style, just before Bauhaus became the go-to architectural style in Tel Aviv. The classic luxury hotel’s restaurant is just as iconic. They serve Vietnamese-French cuisine in opulent surroundings. Another top hotel in this neighborhood is Montefiore 16, at #16 Montefiore Street. The hotel offers classic European hospitality and boasts the inviting Mae Café.

Tourists are more likely to pass through Montefiore than to go there specifically for sightseeing. It is a great place to base yourself and stay in one of the historic hotels. From here you can reach most of Tel Aviv’s landmarks on foot. As you pass through Montefiore on route to popular sites, take the time to look around and enjoy the quiet surroundings, and classic architecture.