Yitzchak Rabin Square is a large public square in Tel Aviv often used for large events, protests, celebrations, and parades. The square is flanked by Ibn Gabirol Street; Malkhey Yisrael Street; Hen Boulevard and the City Hall building stands at the north end. In 1995 the name of the square was changed from Kikar Malkhay Yisrael (Kings of Israel Square) to Rabin Square following the assassination of Prime Minister Yitzhak Rabin that took place here.

The Assassination of Yitzchak Rabin

On November 4th, 1995 a peace rally in support of the Oslo Accords took place in the square. At the end of the rally, Prime Minister Rabin took the stage. As he went down from the stage towards his waiting car Rabin was shot by Yigal Amir, a young ultranationalist radical. In the following days, crowds gathered in the square mourning Rabin. There were many candles lit and people wrote about the loss and their emotions on the lower walls of the City Hall building.

What to See at Rabin Square

Today visitors can see where Rabin was assassinated and a part of the graffiti wall has been preserved. There is a memorial at the northern corner of the City Hall where the shooting took place. The memorial is made of broken rocks in the ground representing the “earthquake” created in the Israeli conscience and politics by the assassination.

At the southern end of the square is a memorial sculpture commemorating the Holocaust by Yigal Tumarkin. The sculpture takes the form of a large upturned metal triangle with bars filling in the sides. Seen from above it forms the shape of the Star of David. In 2010 an ecological pool surrounded by deck and a recreational area was created near the Holocaust sculpture. The pool has koi, water vegetation and lotus flowers, a fountain, and signs explaining the ecological relationship between the water, fish, and plants. 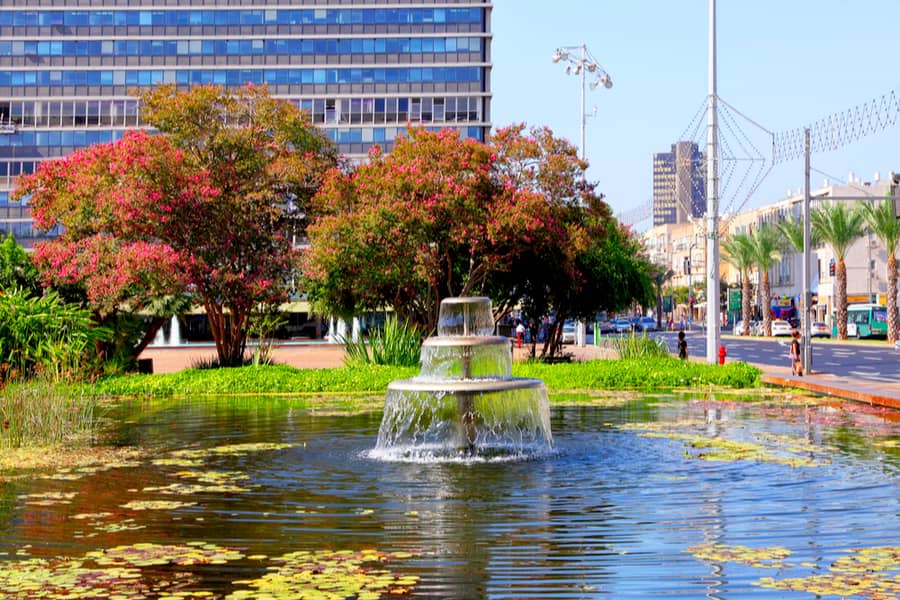