The Monastery of St. George is situated on the side of a rough, almost vertical cliff overlooking Wadi Qelt in the Judean Desert. The Wadi or gorge stretches from the outskirts of Jerusalem southeast to Jericho just north of the Dead Sea.

The Wadi is thought to be the Valley of the Shadow of Death referred to in Psalm 23. The Wadi runs parallel to the ancient Roman road that once led to Jericho. It was along this road that Jesus set the parable of the Good Samaritan (Luke 10:29-37). Today it is possible to follow a 3 hour long hike route through the Wadi and then ascend to the Monastery of St George. 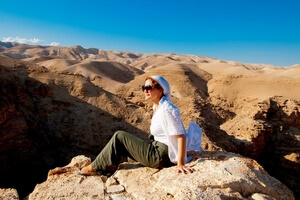 The monastery’s full name is the Monastery of Saint George and John Jacob of Choziba. As early as the 4th-5th century monks seeking solitude and a place to contemplate God inhabited the caves in this area. During that period there were about 70 monasteries and monastic communities in the region. They chose this location because it is remote and because it is close to a cave associated with Elijah (Kings I 17:5-6). In 420 AD St George’s began as a “lavra” a community of hermits living in caves around a church and communal area. The monks would meditate in their caves and come together for prayer and communal meals. The cliff-hanging monastery complex was founded in 480 by Egyptian monk John Thebes (c.440-c.520). Led by Thebes the monastery became an important religious retreat but in 614 Persians attacked the monastery, slaughtering 14 monks and seriously damaging the structures. During the 6th century a Cyprian monk came to live in the monastery and the monastery bears his name – St George of Koziba.
The monastery stood abandoned until being restored in 1179 by the Crusaders and again in 1234 under Frederick II. By 1878 the monastery was once again fully functional and home to a community of monks. A Greek monk called Kalinikos restored the complex over the course of 23 years competing it in 1901. Among the treasures of the monastery are relics of John of Thebes, St George of Choziba and Kalinikos plus several monks and saints associated with the monastery as well as the remains of the monks killed by the Persians in 614. 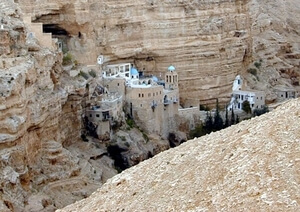 Saint George’s is an active monastery and home to a number of Eastern Orthodox monks who welcome pilgrims and tourists. The monastery’s remote location is reached via a pedestrian bridge spanning Wadi Qelt from the main car park. The walk up to the monastery is a steep 1km route. On the return journey you can opt for a donkey ride back to the car park. As a religious site visitors are required to dress modestly (no shorts for men and women must wear long skirts rather than pants as well as modest tops that cover the shoulders).
Visitors can see the complex’s two churches that hold mosaics, icons and paintings; courtyards; a garden of Cyprus and olive trees and a balcony offering brilliant views. The complex buildings are topped with bright blue domes and there is a bell tower that was added in 1952. Above the monastery further up on the cliff is a cave-church within the grotto believed to have been where Elijah was fed by ravens. A tunnel takes you from the cave-church to the top of the mountain where you can see across the Wadi to an ancient Roman aqueduct.