The Milk Grotto (Magharet Sitti Mariam or Grotto of the Lady Mary) is a Christian landmark in Bethlehem, not far from the Church of the Nativity. The grotto is believed to be where Mary, Joseph and baby Jesus hid following the nativity and where Mary nursed baby Jesus. The site first became venerated in the 4th century and by the 7th century pieces of the grotto’s stone walls were being sent to churches in Europe. In 1375 the Milk Grotto was recognized by Pope Gregory XI. In 1872 a Franciscan church was built around the grotto and in 2007 a modern chapel was built alongside the site connected by a tunnel.

The Milk Grotto in the Bible

The Bible does not specifically refer to the Milk Grotto so the faith in its role in Jesus’ life is a tradition rather than a Biblical event. The Magi (Three Wise Men) visited Herod on route to the nativity and so the king knew of the imminent birth of Jesus. He feared his position if Jesus was allowed to grow into a man. So Herod ordered the death all boys born in Bethlehem that were two years old and under. In Mathew 2:13-14 we read how an angel came to Joseph and warned him to take the new born child and Mary and flee to Egypt.

The angel told Joseph to remain in Egypt until being told to return as Herod was going to search for the new born child to kill him. So Joseph took his family and fled to Egypt where he stayed until the death of Herod. Tradition holds that on route to Egypt the Holy Family briefly hid in the grotto before making their escape. While taking refuge in the grotto Mary nursed baby Jesus and as she did so a drop of her milk fell to the ground turning the surfaces of the grotto white.

The Chapel of the Milk Grotto

The chapel encompasses the grotto today dates back to 1872 but you can still see fragments of the mosaics; geometric motifs and crosses from the 4th century structure. The grotto itself has an irregular shape and is carved out of the soft white rock. Alongside the Milk Grotto is the convent of the Sisters of the Perpetual Adorers of the Blessed Sacrament and a tunnel connecting the grotto to the Chapel of the Holy Sacrament.

Christian and Muslim women who want to conceive visit the chapel to pray for Mary’s intercession to bless them with fertility. Believers will sometimes scrape off part of the white stone of the grotto. Mothers wanting to enhance milk production often mix the white scrapings with water to drink while women wanting to conceive place the white rock fragments under their pillow at night.  Today small packets of the powdered white stone are sold at the site. On display are letters from mothers across the globe that have used the holy white powder and have successfully become pregnant. 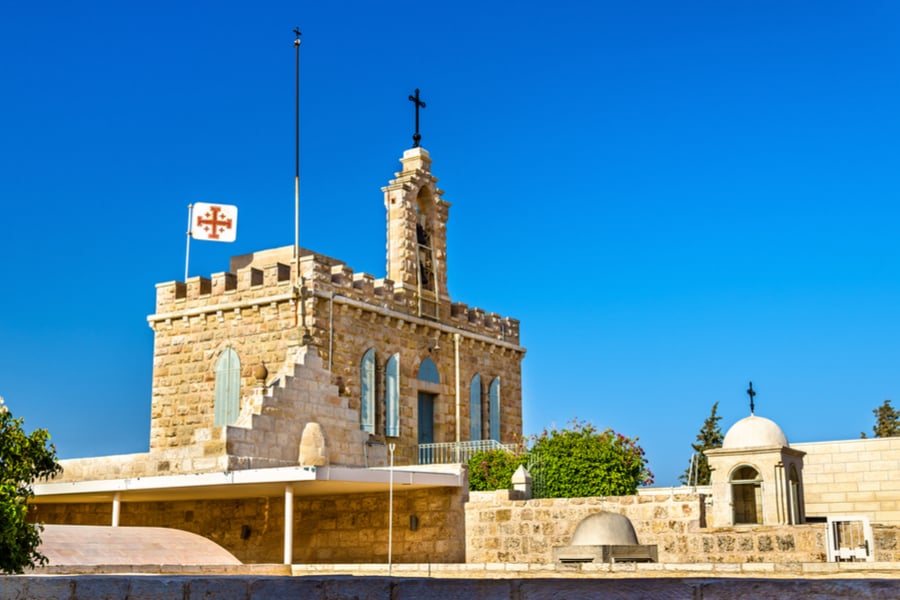