Snir Stream Nature Reserve encompasses the longest of the Jordan River tributaries, the Snir Stream, which is also known as Nahal Snir, Hasbani River, or the Upper Jordan River. The nature reserve is located north of Kibbutz Hagoshrim and covers about 5km. The 60km-long Snir Stream originates beyond Israel’s northern border and travels along most of the length of Lebanon.

It continues into Israel crossing the border at Ghajar and traveling along a fault line through Mt. Hermon’s limestone slopes. Along the way, it gains volume from numerous springs that join the stream. Then the stream enters the northern part of the nature reserve and forges a channel through the basalt rock going south across the reserve. For security reasons, only the southern part of the reserve is accessible to visitors. The park offers visitors a swimming pool, picnic areas, hike trails, observation points, and gorgeous natural scenery surrounding the stream.

Throughout history, the stream’s strategic position between Mount Hermon, the Hula swamps, and the Naftali Hills has been an important junction connecting southern Syria, Lebanese, Jordan, and Palestine. Ancient travel routes passed across the Snir Stream from Iraq and Syria to the Lebanese coast.

After World War I, Ghajar Bridge across the Snir Stream served as a pivotal point for determining the borders between British Mandate Palestine, French Mandate Syria, and Lebanon. After the establishment of the State of Israel in 1948, the Trans Arabian Pipeline (Tapline) was laid parallel to the Nokhila Canal near En el-Bared. The line carried oil from Iraq to the port of Sidon in Lebanon.

After the Six-Day War of 1948-1949, a section of the Tapline in the Golan Heights came under Israeli control. It was sabotaged and crude oil leaked into the Dan Stream, and from there it reached the Jordan River. To prevent such an occurrence from happening in the future, the waters of En el-Bared were diverted from Dan Stream to Snir Stream. The reservoir was created to prevent any future oil leaks from contaminating the Jordan. The pipeline is no longer in use, and the reservoir is used for water storage.

The Snir Stream was part of the Jordan Valley Unified Water Plan of 1955 which divided the use of water between Lebanon, Syria, and Israel. The plan was rejected by the Arab League and was never enforced. In 1964 the Arab League initiated a water diversion project to be carried out by Lebanon, Syrian, and Jordan.

Syria set out to divert the Banias River away from Israel, and Lebanon attempted to divert the flow of Snir Stream to Banias, and onto the Yarmouk River in Lebanon. The plan was to divert 20-30 million cubic meters of water from the Jordan River to Syria and Jordan. The Israeli army prevented the water diversion, but ownership of water resources in the area has remained a source of conflict.

The nature reserve was declared in 1974 to preserve the rare habitat of indigenous flora and fauna, including an important community of otters. The reserve also protects travertine rock created over 25,000 years ago, plus a variety of water plants.

Snir Stream: The stream flows throughout the year, and runs through thick vegetation and travertine walls shaded by a well-developed forest.

Pools: Between the parking area to the stream are two man-made pools. One of the pools is for visitors to play in the water, and the other is for rare water plants including the yellow pond-lily, and the dwarf water clover.

Bird Watching: The park has a bird hide in the northern part of the reserve overlooking the Tapline reservoir. The reservoir is an important resting point for migrating birds and a home for many water birds. The bird hide is particularly interesting in the winter when the reservoir is visited by migrating different waterfowl.

Observation Points: The Snir Stream Lookout is part of the long hike trail. Visitors can get a great view of the northern part of the reserve where the stream flows past a basalt plateau and through a canyon. The Ghajar Bridge stands at the point where the stream leaves the canyon. The bridge is not accessible to visitors and you can’t see it from the observation point, but you can see along the canyon.

Hike Trail: The Snir Stream Hike Trail runs for 1km along the eastern bank of the stream. There is plenty of shade from the dense plane trees. During winter there can be strong currents that result in the hiking trail being closed.

Travertine Falls: To the left of the hiking trail is a series of small waterfalls. The water flows from the Dan Stream into the Snir Stream and makes a path for itself through the yellowish travertine rock. This unique rock is formed by a slow, steady current flowing continuously for many years.

Archaeological Remains: Several archaeological remains were uncovered in and around the reserve. Some of the findings are on display in the museum at Kibbutz Ma’ayan Barukh. Excavations have uncovered a network of ancient man-made water channels once used to divert water from the Dan Stream to the Snir Stream for irrigation.

The visitors’ parking area serves as a barbeque and picnic area. It is also the entrance to the park. The nature reserve is open Sunday to Thursday and Saturdays from 8 am to 5 pm, and until 4 pm in winter. On Fridays and holidays eves the park closes at 4 pm/3 pm. 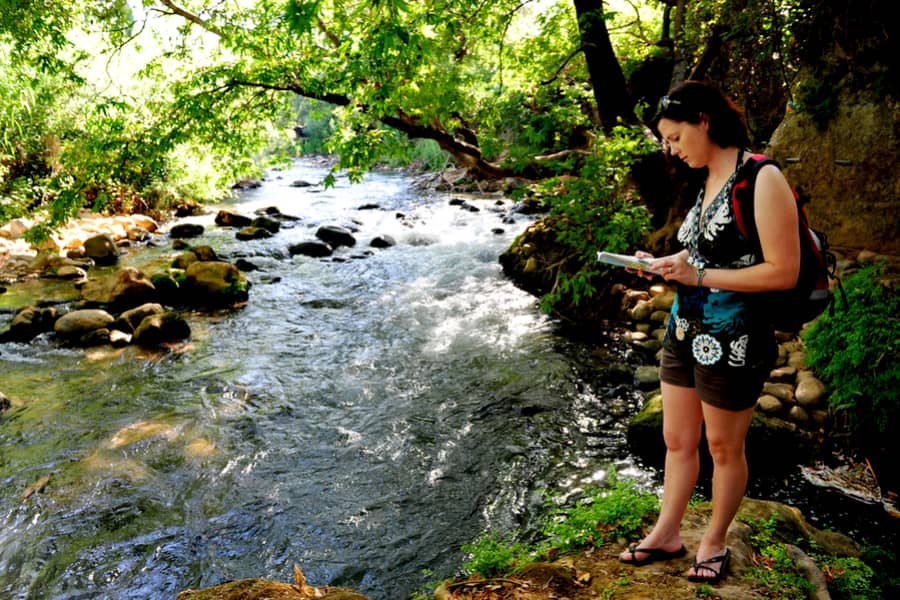