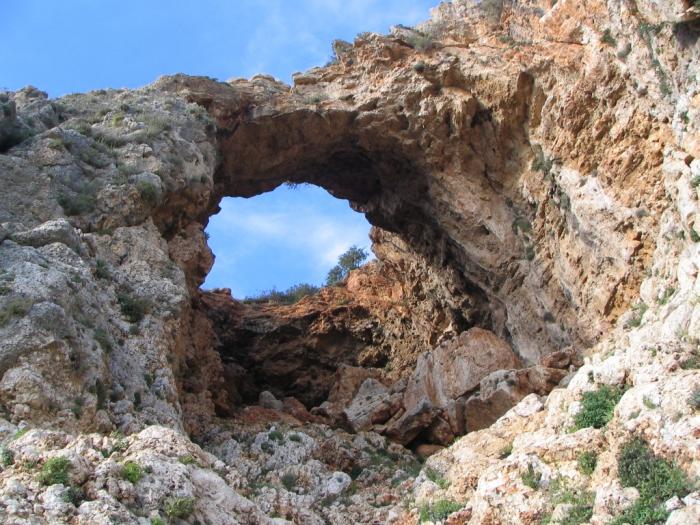 If you’re looking for endless untouched landscapes and hike trails with unexpected twists and turns, then head for Adamit Park. The park is on the Adamit Mountain Ridge, in the Western Upper Galilee. One of the park’s highlights is the Arch Cave, (in Hebrew, Me’arat HaKeshet or Keshet Cave). The dramatic arch is on a rocky cliff, overlooking Nahal Betzet Valley from a height of 150-meters. About 40-meters (130ft) below the arch is the shallow Keshet Cave. Like many other caves in the area, the Arch Cave was formed by natural erosion. At one point, the cave ceiling collapsed, leaving only the arch.

A path leads to the cave floor, and another path takes you to the arch above. Between the cave floor and the arch is the huge opening that forms a natural frame for the scenic views beyond. Keshet Cave attracts visitors who climb the rock steps to the top of the arch to take in the views. There are metal railings for visitors to hold on to, as they walk across the rock arch. Keshet Cave is also popular with extreme sports enthusiasts who can rappel from the arch down to the cave floor.

Legend has it that a band of highway robbers would prey on travelers crossing the Betzet Valley. One night the Prophet Muhammad appeared to one of the thieves and told him to convince the men to mend their ways. The thieves didn’t want to change, despite the constant pleas of the man who had seen the Prophet. To shut him up, the thieves told him they wanted to do one more robbery before they left the highway robbery business for good. They appointed the reformed thief as lookout and posted him on the cliff above the Keshet Cave. The thieves intended to throw the man off the cliff. At that moment, God caused the roof of the cave to collapse on the thieves, leaving only the stipe of rock where the reformed thief stood. This is the rock arch we see today.

There is more to see in Adamit Park than the Keshet Cave. There are woodlands, groves of fruit trees, lookout points, and hike trails. You can discover many caves created by the abundant rainfall in the area, which has dissolved the dolomite rock over thousands of years. It’s worth seeing the Namer Cave where there are stalactites and stalagmites. A one-way scenic road circles east from the park entrance to the upper car park. Leave your car here and set out to explore on foot. Take the Scented Flowerbeds Trail or the Terrace Path that leads to the Keshet Cave. The scenic road continues from the upper car park to the Henion-Nof Recreational Area. Here there are picnic tables, toilets, drinking water, and fantastic views. Two paths branch off from the recreational area. One leads to the Keshet Cave, about five minutes away. The other path is a circular route to Khirbet Admit, through cedar forests and fields of spices.