Situated in the Lower Galilee, east of the Jezreel Valley can be found Mount Tabor (‘Har Tavor’ in Hebrew).  At its highest peak, it stands at 570 meters - it is not the tallest hill in the region (some in Nazareth are higher) - but physically its contours are unique.  Described as both ‘hump-backed’ and ‘breast-shaped,’ centuries ago its inhabitants regarded it as possessing supernatural qualities. Green all year round, it provides superb panoramic views of the surrounding area.

At the bottom of the Mount once lay the ‘Via Maris’ - a road which began at the Jezreel Valley, passed through it and continued onto Damascus.  This trade route, as well as its strategic importance, made Tabor of significant value over the centuries.

Mount Tabor is mentioned in the Hebrew Bible (both in Joshua and Judges) as the site of a battle between the Israelites and the Canaanites.  In the time of the Second Temple, it also served as one of the mountain peaks where beacons were lit, so as to let villagers in the area know that it was ‘Rosh Chodesh’ (the beginning of a new month) or one of the holy Jewish festivals. Mount Tabor is also one of the most important Christian sites of Galilee since it is widely regarded as the site of the Transfiguration of Jesus. Whilst it is not specially named in the Christian Bible, according to the Gospels this was the place that Jesus was ‘transformed into the light’ and spoke to Moses and Elijah the Prophet, in the presence of three of his disciples.

Only 18 km drive from the Sea of Galilee, Mount Tabor was reforested in by the Jewish National Fund after the establishment of the State of Israel and much of the peak today is covered in Tabor Oak and Palestine Oak. The area is home to a variety of flora and fauna - Persian lilies, orchids, and crocuses, as well as being home to jackals, mongooses, the Lebanese lizard, and the red whip snake.

Between 1919-1924, Antonio Barluzzi constructed a Franciscan (Catholic) church at the top of Mount Tabor, named ‘The Church of the Transfiguration.  It was built upon the ruins of a Byzantine church dating back to the 5th century and a Crusader church from the 12th century. Inside are two chapels, built in the Ottoman Empire and British Mandate period respectively.  Today, this church shares the site with the St. Elias Greek Orthodox Monastery, who celebrate the Feast of the Transfiguration each August 6th by holding a nighttime vigil.

To visit Mount Tabor, join our Nazareth and Sea of Galilee Private tour. 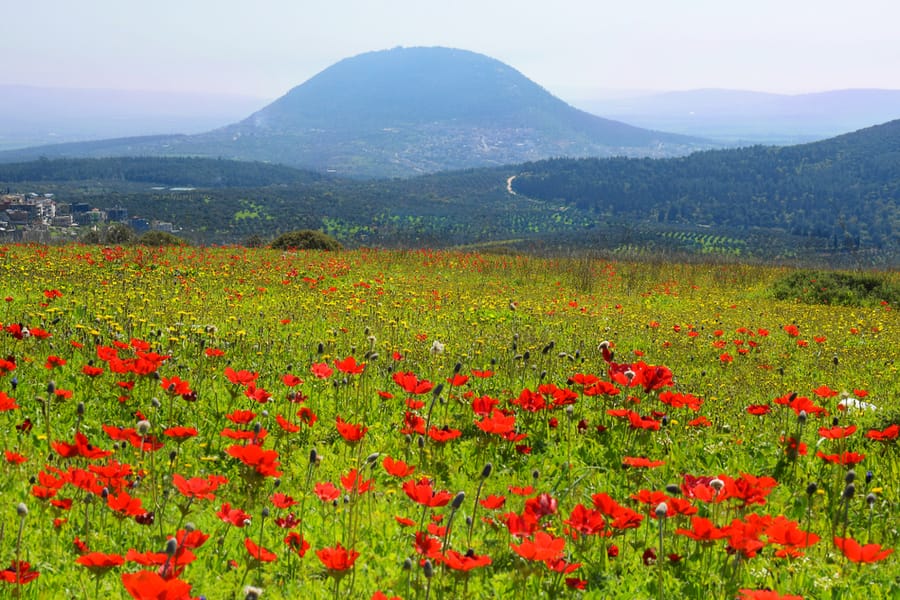