The Sea of Galilee (also called by its Old Testament name – Kinneret) is a freshwater lake in northern Israel’s Galilee region nestled in a valley surrounded by fields, forests, and mountains. On the eastern shore is the Golan Heights mountain range and on the western shore is Tiberias the largest city on the shores of the Sea of Galilee. The Kinneret is traditionally called a “sea” but is actually a lake. It is about 21km long and 13km wide covering 166.7km². The Sea of Galilee is fed by underground springs and the River Jordan which flows into the lake from the north and out at the southernmost point. It is Israel’s main water reservoir.

The Sea of Galilee in Biblical Times

The Kinneret is mentioned in the Old Testament but appears more prominently in the New Testament. Jesus lived in Galilee for several years during his ministry when he traveled between the small settlements on the shore of the lake and in the surrounding hills preaching the word of G-d. Jesus recruited his apostles from the lakeside villages; gave the Sermon on the Mount at the Mt. of Beatitudes that overlooks the sea and walked on water at the Sea of Galilee. Jesus also calmed the storm at the Sea of Galilee and fed the multitudes with just seven loaves of bread and two fish. Jesus appeared to his disciples after his resurrection on the shores of the Sea of Galilee.

Enjoy the pastoral surroundings of the Sea of Galilee; relax on the beaches; go camping; visit religious sites; hike the Sea of Galilee Trail that circumvents the lake; do watersports and take boat excursions. Highlights of a trip to the Sea of Galilee include Tiberias, a vibrant waterfront city home to the graves of Jewish sages, and Yardenit, a baptismal site at the southern end of the Sea of Galilee in the Jordan River. Visit the churches that mark New Testament locations like Tabgha, Capernaum, Cana, and Mount of Beatitudes. At Kibbutz Ginosar you can see the Jesus Boat, a 1st-century fishing boat found in the bed of Lake Kinneret.

Want to explore the Sea Of Galilee? Join our Sea of Galilee, Cana, Magdala & Mt. of Beatitudes Tour.

The Mount of Beatitudes
Yardenit Baptism Site
Church of the Primacy of St. Peter
Bethsaida 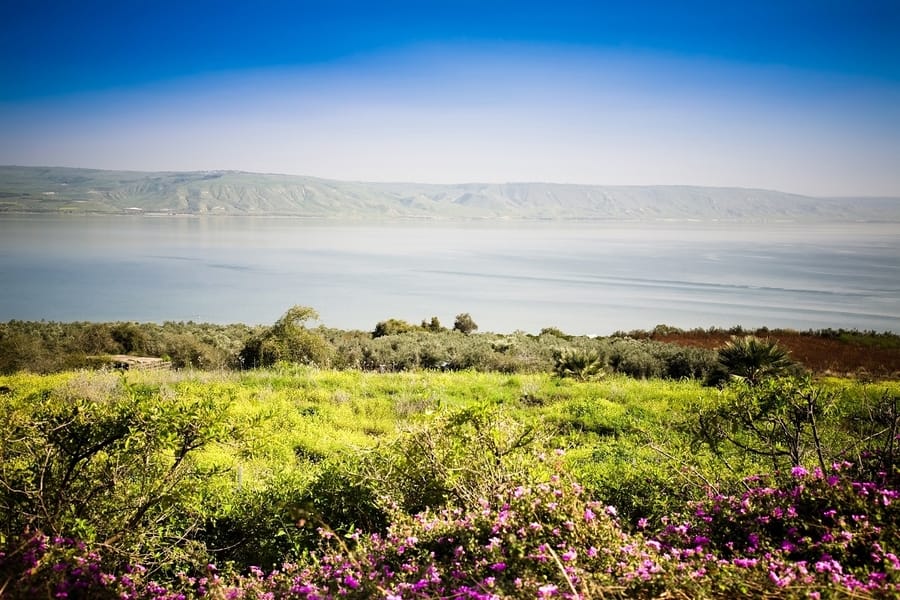