The Mount of Beatitudes (also known as Mount Eremos) is a small mountain in northern Israel in Galilee near the town of Tabgha on the shore of the Sea of Galilee. The mount is between Capernaum and Tabgha and overlooks the fields of Gennesaret. Not far from the mount is Sower’s Cove where it is believed that Christ told the parable of the sower (Mark 4:1-9). The Mount is believed to be the site where Jesus delivered the Sermon on Mount.

The Sermon on the Mount

Matthew 5:3-11 and Luke 6 relate how Jesus spoke to the gathered followers and began his sermon with the eight beatitudes (from the Latin word for blessings) “Blessed are the poor/they who morn/meek/they who hunger and thirst for justice/merciful/pure of heart/peacemakers/ they who suffer persecution for justice sake. The mount would have provided enough space to accommodate the followers and the gradual incline forms a perfect natural amphitheater where Jesus could have delivered his sermon.

The Mount of Beatitudes is the traditional location of the Sermon on the Mount, one of the New Testament Bible’s most significant addresses. Although the mountain was not specifically named in the Bible the site has been revered as the sermon location since early Christian pilgrims began visiting the mount and writing about it in the 4th century AD. The remains of a 4th-century church and its cistern can still be seen as well as what is left of an early monastery on the mount. The Mount of Beatitudes also meets the geographical specifications from the Bible as at the time Jesus was based in Galilee during his ministry years.

The mount is also conveniently located in close proximity to the place where Jesus is believed to have performed the miracle of the multiplication of the loaves and fish where he fed 5,000 followers with only 5 loaves and 2 fish. The Mount of Beatitudes is a popular Christian pilgrimage site. In 1964 Pope Paul VI visited the site and his cloak still hangs in the church while in 2000 Pope John Paul II held mass on the site. The Jesus Trail, which retraces the steps of Jesus and goes through the villages and sites he would have visited during his ministry in Galilee, includes the Mount of Beatitudes.

The Church of the Mount of Beatitudes

The Roman Catholic Franciscan church was designed by A. Barluzzi and constructed in 1938 in the Byzantine style. The church was partially funded by Mussolini and constructed for use by Franciscan nuns.  It has an octagonal shape representing the eight beatitudes and the seven virtues are depicted in the mosaic surrounding the altar. The inner dome is particularly beautiful with gold mosaics but most are in awe of the idyllic setting and breathtaking views from the mount.

The church facade has aesthetic arches supported by columns around, covered cloisters, and above that towers the one central dome. The church is surrounded by peaceful gardens and in the expansive courtyard in front of the church is a mosaic floor created by Italian artist Vasco Nasorri in 1984. The mosaic depicts justice, prudence, fortitude, charity, faith, and temperance.

Where: The Mount of Beatitudes is reached via Route #90 turning off at Tabgha and traveling towards Rosh Pina and the Upper Galilee. Open Hours: The Church of the Mount of Beatitudes is open daily from 8:30 am to 12 noon and again from 2:30 pm to 5 pm (4 pm in winter). Admission: There is a free entrance to the church but a fee for the parking lot. 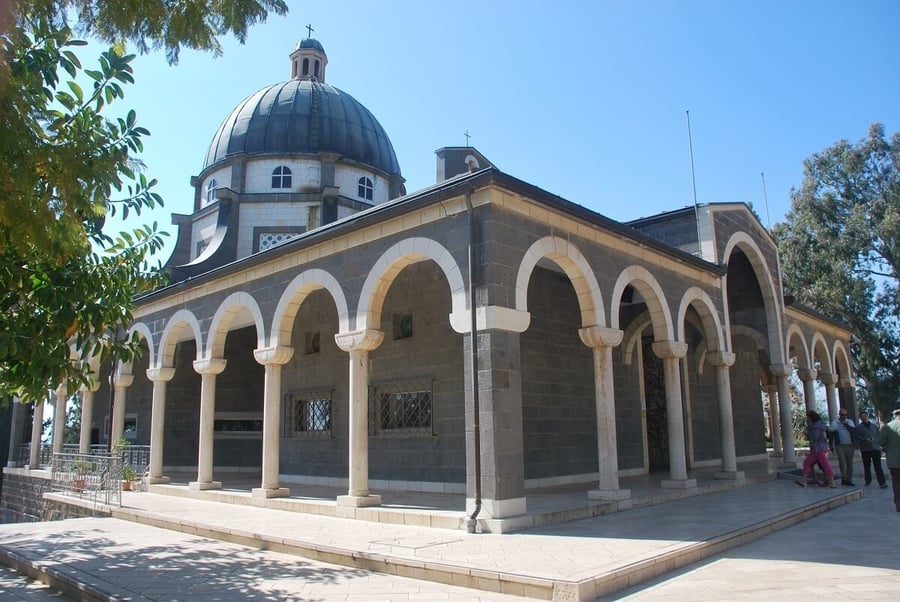