Tabgha is a small area right on the edge of the Sea of Galilee, on the western shore between Capernaum and Ginosar and just below the Mount of Beatitudes. The name Tabgha comes from the Greek – Heptapegon, meaning place of the seven springs. Tabgha has been identified as the site of the miracle of the loaves and fish (Mark 6:30-46) and the place where resurrected Christ came to meet his disciples (John 21:1-24). The seven springs of Tabgha bring warm water into the Sea of Galilee attracting fish which has made it a popular fishing area for centuries. The area has lush green vegetation, trees offering shade and the cool water just a few steps away. 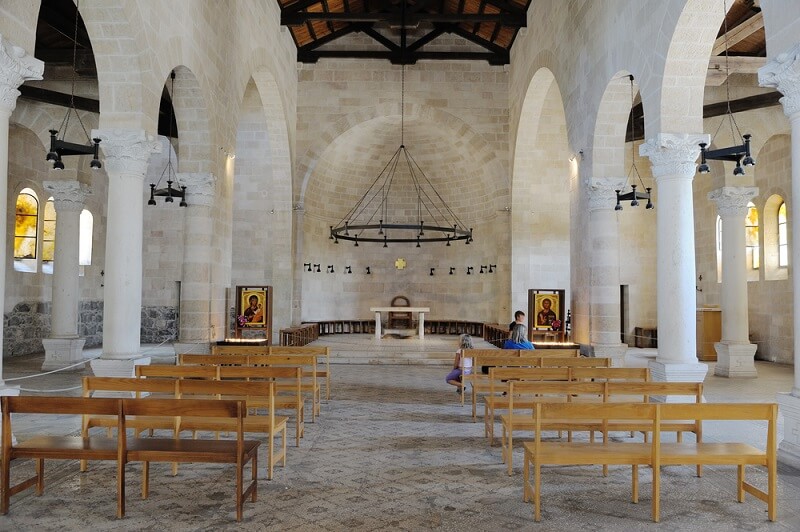 Church of the Multiplication of the Loaves and Fish, Tabgha. Photo credit: © Shutterstock

Biblical TabghaThe Gospel of Matthew tells us that after Jesus heard that John the Baptist had been beheaded by the Romans he withdrew in a boat to a secluded area. Crowds of followers went after Jesus and by nightfall, there were 5,000 people gathered on the hillside. Jesus took five loaves of bread and two fish and gave them the traditional blessing. Then he divided the food among the gathered crowd. The loaves and fish miraculously fed all of the 5,000 people and there were even leftovers.

After Jesus was resurrected he appeared several times to the disciples; one of these appearances took place in Tabgha. Peter, Andrew, Simon, and four other disciples were at Tabgha where they had been fishing through the night but had failed to catch anything. They came ashore and as the sun rose they saw Jesus standing in front of them on the beach of Tabgha. The disciples did not recognize Jesus but he called out to them.

He told them to throw their fishing nets back into the water. When the disciples brought their nets in they found them full of fish. Jesus prepared food for the disciples over a fire and lay out the food on a rock. This rock became known as the Mensa Christi and can be seen today in the Church of the Primacy of St. Peter at Tabgha.

Jesus challenged Peter’s faith three times symbolically canceling out the three times that Peter denied Christ on the night before the crucifixion. Then Jesus commissioned Peter to lead the church. He asked Peter to feed his lambs, tend his sheep and feed his sheep. Jesus also told Peter that he would die a martyr. From this point onwards Peter was recognized as the head of the church and the apostles. 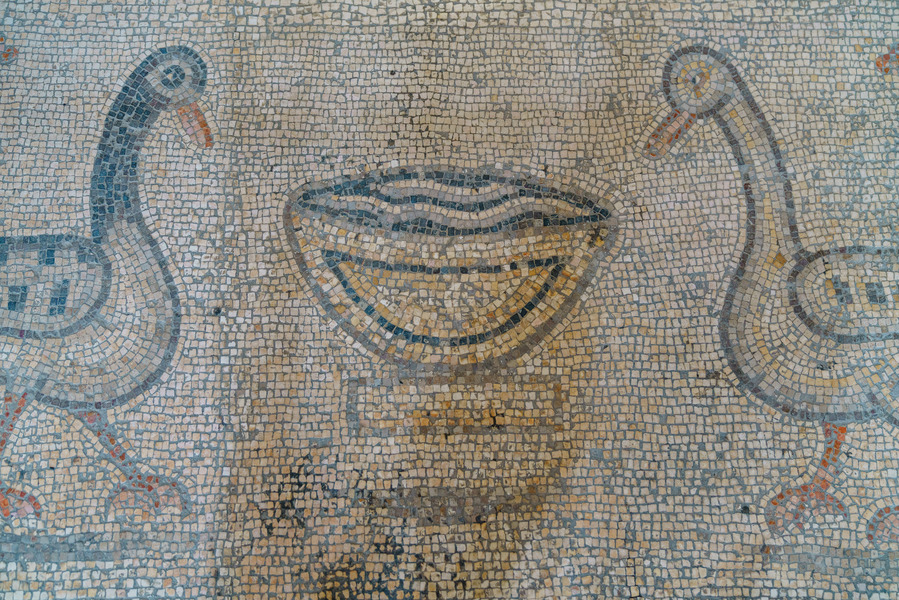 Floor mosaics in the Church of the Multiplication of the Loaves and Fish, Tabgha. Photo credit: © Dmitry Mishin

In the Byzantine era, the spring water of Tabgha was channeled into three water towers and taken via aqueducts to nearby Ginosar to be used for irrigation. During the 4th century, a small chapel was built by Joseph of Tiberias. It was replaced with a chapel in 480 by Martyrius of Jerusalem, the Patriarch of Jerusalem. Martyrius was originally from Egypt and he had the floor mosaics of the chapel created in the Egyptian style. The mosaic we see today of the fish and loaves has survived from this original chapel.

The chapel was destroyed in 614 and remained in ruins until excavation in the 20th century. Under the Crusaders the Church of St Peter’s Primacy was constructed in Tabgha and the city was known as Mensa Christi (table of Christ) or Mensa Domini (work of the table). During the Ottoman era in 1595, a village existed on the site of Tabgha with a few houses and mills. Under the British Mandate, a community of Muslim and Christian Arabs lived here and farmed the land. During the 1948 Israeli War of Independence, Tabgha was cleared of residents and structures destroyed. Since then Tabgha’s lands and historic structures have been restored. 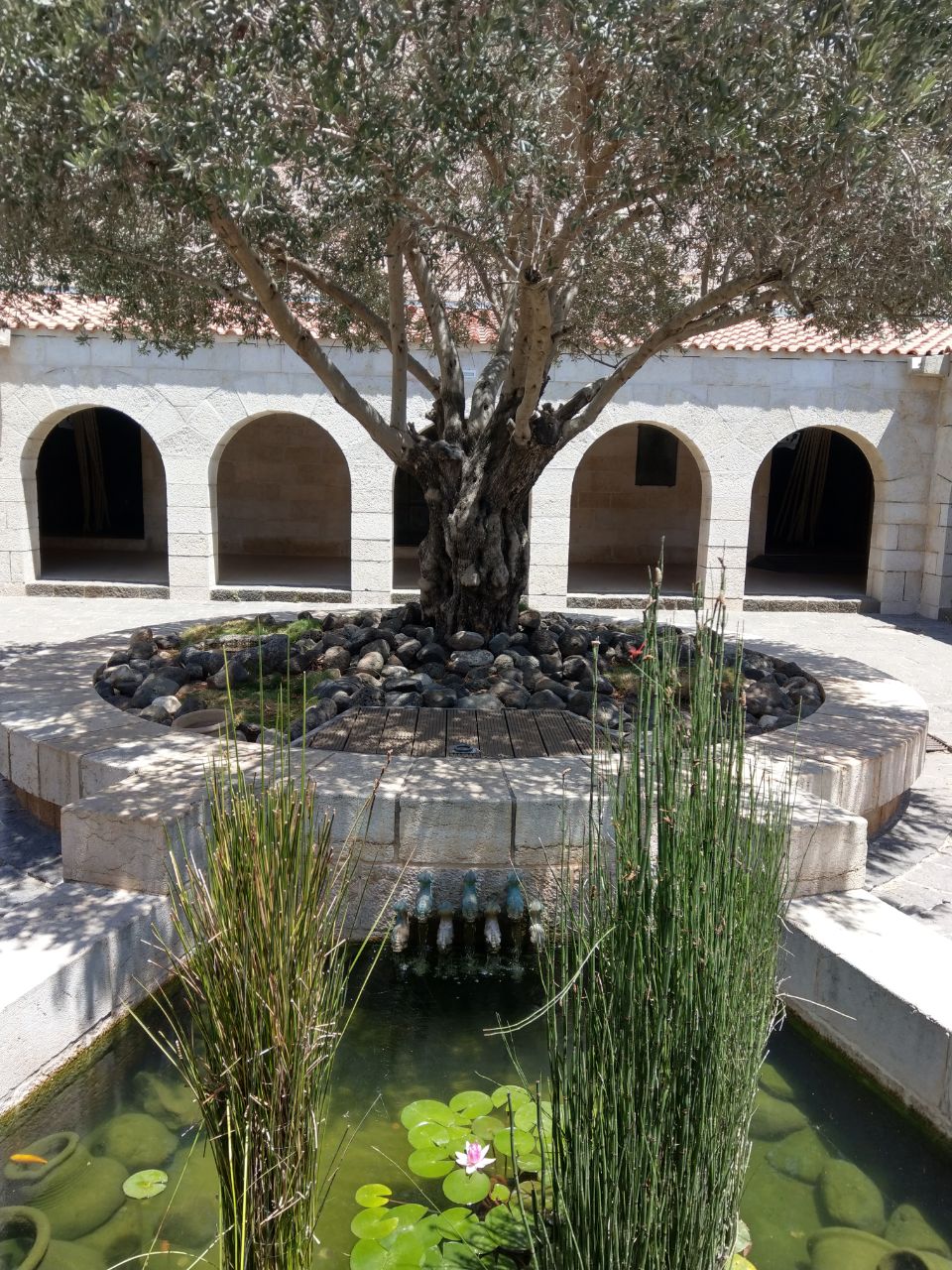 Church of the Primacy of St. Peter

After Jesus’ resurrection, he appeared to his disciples at Tabgha where they sat down together to eat. It was at this time that Jesus chose Peter to lead the Christian church. This site is commemorated on the beach of Tabgha by the Church of the Primacy of St Peter. It is a small structure built in 1934 of black basalt rock. In the surrounding gardens, you can see a bronze sculpture depicting Jesus giving Peter his blessing. The church is literally on the water’s edge and you can take just a few steps down to the shore and even touch the water. This is a quaint and peaceful church with idyllic gardens and ample shade all around.

Church of the Multiplication of the Loaves and Fish

The 20th century Church of the Multiplication of the Loaves and Fish that we see today stands on the site of the original 4th-century church and the Byzantine floor mosaic has survived. The mosaic features images of birds, snakes, vines, fish, and flowers. There are peacocks, a flamingo, swan, ducks, herons, geese, cranes, geese, and cormorants. The most significant mosaic is the one closest to the altar that depicts a basket of bread flanked by two fish. Rock in its natural state lies beneath the altar and is believed to be where Jesus placed the bread and fish as he made the blessing.

To visit Tabgha, join our Nazareth and Galilee Tour.