The Miracle of Multiplication in the Bible

In Mark 6:30-46 we read how Jesus and his disciples went out on the water to a remote site in search of some peace and quiet. Crowds of Jesus’ followers came after them and as night fell there was nowhere around to find food for the multitudes. To feed the crowd of five thousand people Jesus performed a miracle sharing the meager two fish and five loaves between all the people. Shortly after performing this miracle Jesus performed an additional miracle by walking on the water. The Biblical reference does not mention Tabgha by name but calls it a remote place on the shores of Galilee.

The name Tabgha comes from the Greek for “Seven Springs” but Tabgha was originally called Heptapegon.  During the Byzantine era there were three water towers at Tabgha. The water from natural springs was collected in the water towers and sent via aqueducts to nearby farmlands to irrigate the fields. It was in the 4th century that Christians first identified Tabgha as the Biblical site of the miracle of multiplication. In 350 AD. The first church was built to mark the Biblical site.

In the 5th century the Church of St. Peter’s Primacy was built in Tabgha where Jesus gave Peter leadership over the apostles and where Jesus appeared to his disciples after his resurrection. The church was later destroyed and rebuilt in 1934. In 1596 a small Muslim village stood where Tabgha is today. From 1922 to 1948 Palestine was ruled by the British and under their authority Tabgha continued to be inhabited by a mainly Muslim population. During the 1948 Arab-Israeli War the area was cleared of inhabitants and following the war the area was resettled and the new churches built.

The Church of the Multiplication

Today the Church of the Multiplication is a modern structure built on the remains of the 4th-century church. The highlight of the church is the Byzantine floor mosaic which survived after the original church’s destruction in 685. The mosaic near the altar shows two fish on either side of a basket of loaves. Other features of the mosaic are vines, lotus flowers, oleanders and animals including ducks, geese, doves, peacocks, cranes, herons, a swan and flamingo. In the church’s 5th century floor mosaic there seems to be a reference to the three original Byzantine water towers that once stood here.

Beneath the altar of the Church of the Multiplication is a large rock where it is thought that Jesus placed the fish and loaves as he blessed them. There is a glass panel in the floor through which you can see the foundations of the original church. In the church courtyard you can see an excavated basalt stone font and oil presses. 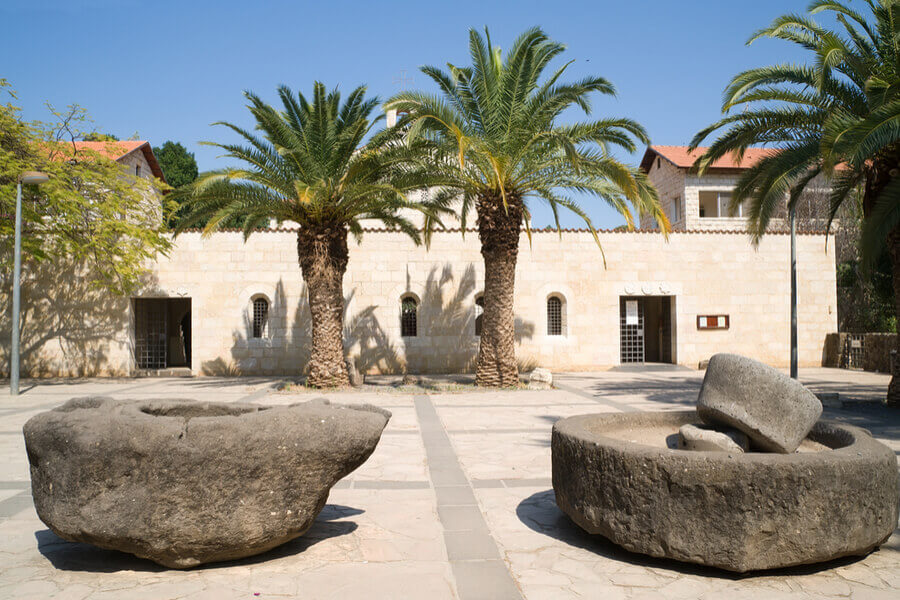