Capernaum (Kfar Nachum) is a city on the northern shore of the Sea of Galilee which can trace its history back to the 2nd century BC. Capernaum features in the New Testament as the place where Jesus based himself during his ministry.

Capernaum in the Bible

During Jesus’ lifetime, Capernaum was a fishing village and home to the disciples, Andrew, John, James and Peter who were all fishermen as well as the tax collector, Matthew. The Bible tells us that Jesus left Nazareth and went to live in Capernaum where he based himself while traveling to villages in Galilee to preach during a period of his life referred to as his ministry. Here in Capernaum, he saw the future disciples casting their nets into the sea and he called out to them to join him. In Mark 1:21 we head of how Jesus taught in the Capernaum synagogue. We also read of Jesus performing miracles in Capernaum. Jesus cured a man who was possessed; he cures Peter’s mother-in-law of a fever; cured a Roman centurion’s servant in Capernaum and cured a paralyzed man. Jesus must have spent a considerable amount of time in Capernaum as the Bible refers to it as “his own city.”  Later Jesus cursed Capernaum and its people because of their lack of faith (Matthew 11:23).

House of Peter - Several ancient dwellings were uncovered in Capernaum but the one that stood out was the site of Peter’s house. 2nd-century Christian pilgrims left graffiti on this early dwelling some bearing the name “Peter.” This has brought experts to believe that it may have been venerated as the house of the apostle Peter as far back as the mid-1st century. A 4th-century house-church was built here and later in the 5th century, an octagonal church and baptistery were built above the same site. Today a modern octagonal church stands above the ancient ruins which can be seen through a glass panel in the floor. Looking down through the glass you can see the remains of the original dwelling and the Byzantine octagonal church built around it.

Ancient Synagogue of Capernaum – The remains of two synagogues, built one on top of the other, have been uncovered in Capernaum. Archaeologists estimate that the earlier synagogue was built in the 1st century AD so it would have stood here during Jesus’ lifetime and may have been where he preached and performed miracles. The west wall of the synagogue has survived and on top of the remains, a 3rd-century Byzantine synagogue was built. The later synagogue had white limestone exterior walls and painted stucco interior wall. The white brick stands out against the other excavated remains which were built in the local black basalt rock. Excavations have uncovered Roman-era dwellings and on top of those a 4th century Byzantine village. Visitors can see the excavated remains of the Byzantine village built from the local black basalt rock. There are also displays of early stone agricultural equipment and oil presses in the courtyard of St Peter’s House Church.

To visit Capernaum Join our Nazareth and Sea of Galilee Tour. 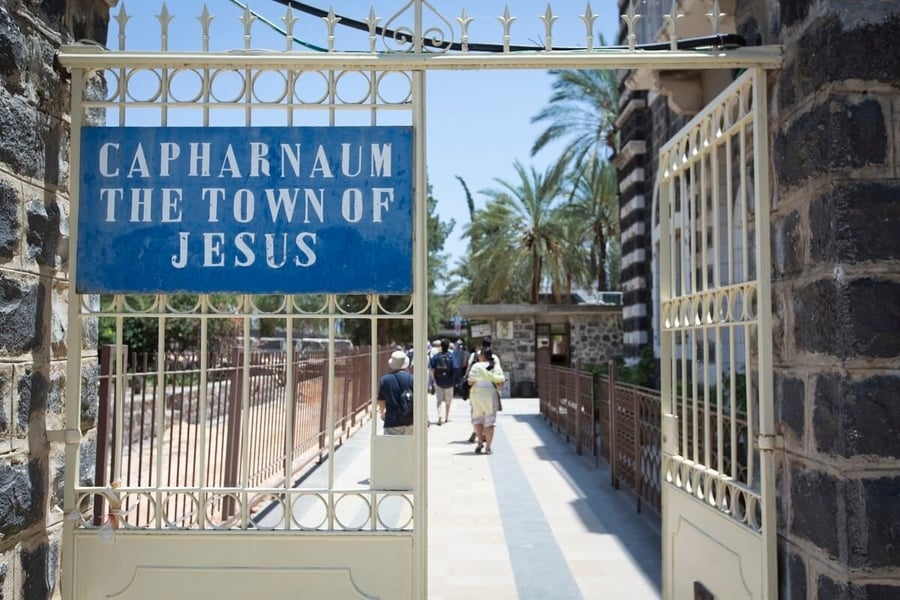