Ginosar lies on the western shore of the Sea of Galilee north of Tiberias in the Ginosar Valley. The idyllic countryside and rich farmlands have caused the area to be called the Paradise of the Galilee. Ginosar was an ancient city that has been excavated. Today Ginosar is home to Kibbutz Ginosar; a village and hotel. The main attractions in Ginosar are the Yigal Allon Museum holding the Jesus Boat and the beautiful countryside and shore of the Sea of Galilee.

In the Bible Ginosar is referred to as Kinneret, Chinnereth or Chinneroth; it is also called Dalmanutha in the Gospel of Mark.  3,000 years ago the town was so prominent it gave its name to the adjacent lake- Lake Kinneret (the Sea of Galilee). The Kinneret is mentioned in the Book of Joshua, the Book of Numbers and Deuteronomy. The name changed over the years to Gennesaret and finally, at some time in the 1st century AD the name was Romanize to Ginosar. In the Talmud the sages praise the fertile lands and abundant produce in Ginosar. Gennesaret was also described by the Roman historian Josephus Flavus as a land of fertile soil. Archaeological findings show that the ancient town was home to Jews and believers of a polytheistic religion living side by side.

In Matthew we read how Jesus sailed across the lake and landed at Ginosar. A crowd gathered wanting Jesus to cure their ills. Jesus lets the afflicted people touch the fringe of his cloak and they were cured. During Jesus' lifetime, Ginosar was a prosperous town known as Gennesaret and the name Ginosar appears in the New Testament.

In 1986 a drought caused the water level of the Sea of Galilee to drop revealing the bed of the lake. The frame of a 1st-century fishing boat was found embedded in the mud. The boat was retrieved and preserved; carbon dating determined that the boat came from 100 BC - 70 AD. This means that it is one of the same boats used by fishermen during Jesus lifetime. The fishing boat was made from twelve types of timber and measured 8.2m long and 2.3m wide. The boat also resembles those described in the Bible and so it became known as the Jesus Boat. Today the boat is on display in the Yigal Allon Museum on Kibbutz Ginosar. 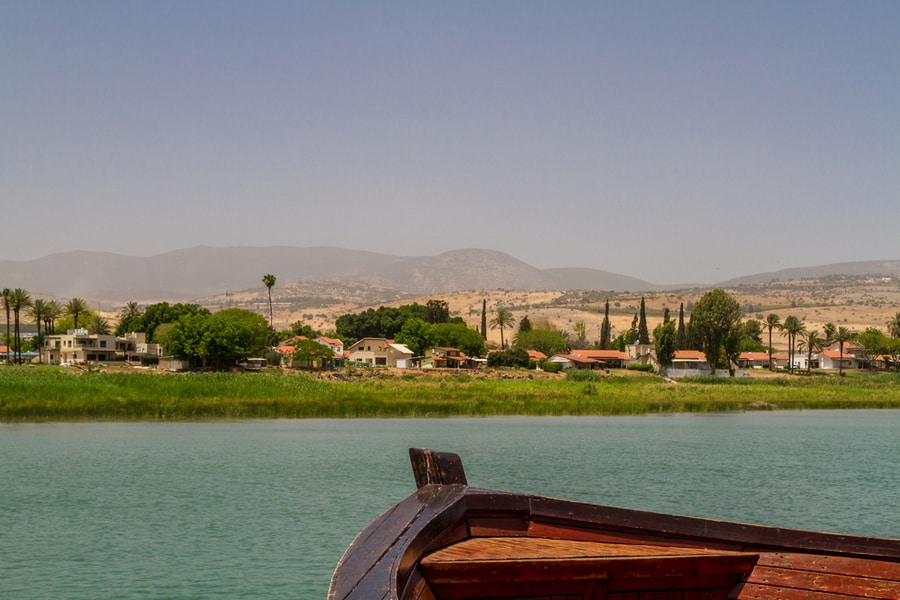