Christians around the world know Nazareth as the hometown of Jesus Christ. Tourists come to see the Church of Annunciation, where Mary learned of her immaculate pregnancy, and Saint Joseph’s Church built above the carpentry and home of the Holy Family. But visitors often miss the fascinating Synagogue Church in Nazareth, which would have been the local synagogue when Jesus lived here. The church is in the heart of Nazareth’s Old Market and is accessed via a small courtyard. In Arabic, the church is called Madrasset El-Masshiach or The Messiah Academy, and a sign above the door reads “The Synagogue.”

History of the Nazareth Synagogue Church

Christians began worshiping in the synagogue during the Byzantine era, and by the Middle Ages, it had been turned into a church. The earliest mention of the Nazareth synagogue was in 570 AD when an Italian visitor to the town wrote that he had seen where Jesus once sat and prayed. Excavations have shown that the present structure was probably built on the remains of a 12th-century Crusader church. The church was controlled by the Franciscans until the 18th-century when the autonomous Arab ruler of the region, Zahir al-Umar, gave the property to the current owners, the Greek Catholic Church (Melkite).

The Synagogue Church in the New Testament

Christian tradition holds that the church is built on the ruins of the synagogue where Jesus worshipped in his childhood years and up until he began his ministry at about 30 years of age. This period of Christ’s life is hardly mentioned in the Bible. This makes the Synagogue Church even more significant to Christians.

The synagogue was mentioned in Matthew 13:54-58 and Mark 6:1-6 when the local congregation chased Jesus out of the synagogue because they didn’t think he could perform miracles. They rejected His new approach to G-d and religion. The same incident is told in Luke 4:14-30, but in Luke’s version, Jesus was shunned by the Nazareth congregation for giving a Shabbat sermon that implied He was the Messiah. This led to the miracle of the leap at Mt. Precipice. The crowd of angry villages chased Jesus to the mount intending to throw him off the cliff, but instead, Jesus jumped and disappeared.

Visitors descend into the church which has sunk about 1.5m below ground level over the years. The church has an arched ceiling and benches on both walls of the nave, leading to a podium and altar. You can also visit the adjacent New Synagogue Church built in 1887 which has beautiful murals featuring Jesus as a baby, a teen, and a king. The Nazareth Synagogue Church is open Monday to Saturday from 8 am to 12 noon and 2 pm to 7 pm. 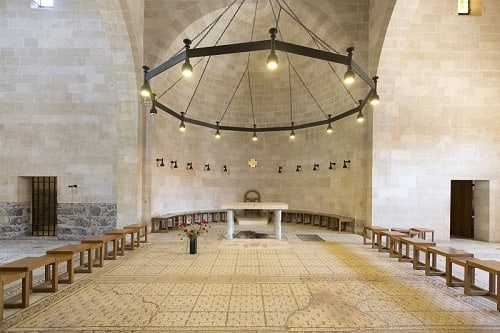 Nazareth and the Golan Heights, 2 Days