The Church of St. Joseph is located in northern Israel in the city of Nazareth where Jesus grew up, the church is believed to be situated where Christ’s earthly father, Joseph once had his home and carpentry workshop. This would then have become the home of Mary as well following their marriage. The church is also known as the Church of Nutrition and the Church of Joseph’s Carpentry.

The location first became recognized as the home of the holy family in the 17th century when texts referred to it as “the house and workshop of Joseph.” The Church of Saint Joseph’s Carpentry is within the same complex as the Basilica of the Annunciation together with the Franciscan convent Terra-Santa. In the courtyard you can see architectural artifacts which were uncovered during excavation. Within the church which now stands at this location are several interesting stained glass windows and paintings depicting scenes involving Joseph.

There is the scene of Joseph and Mary’s wedding, Joseph dying in the arms of Jesus and Mary, a scene of Joseph showing Jesus how to work in the carpentry as Mary looks on and The Dream of Joseph. The present-day church was constructed in 1914 on what remained of a Crusader Church and this in turn was built on a series of caves. The caves were probably used for food storage in Biblical times and may have been where the workshop was situated. From the present-day church, there is a stairway going down to a crypt and through a grille in the floor where you can see the caves.

Further down there is a pool or basin measuring 2m², the pool has a black and white mosaic floor and is thought to have been a baptistery dating back to the 1st century AD. The floor mosaic depicts what appears to be a ladder perhaps symbolizing the spiritual elevation of new converts to Christianity. This indicates that Christians gathered here in Biblical times even before the town had official churches. It appears that the home, having been identified as the home of the Holy Family, was used for Christian worship during the Byzantine era.

There are still further steps, which appear to be older, which reach a narrow passage that eventually opens up into a room. In this room are caves that have been carved into the limestone to be used for storage of grain and as water cisterns. This was a typical method of storage during the Roman era.

Join our Nazareth and Sea of Galilee Tour to visit the Church of St. Joseph. 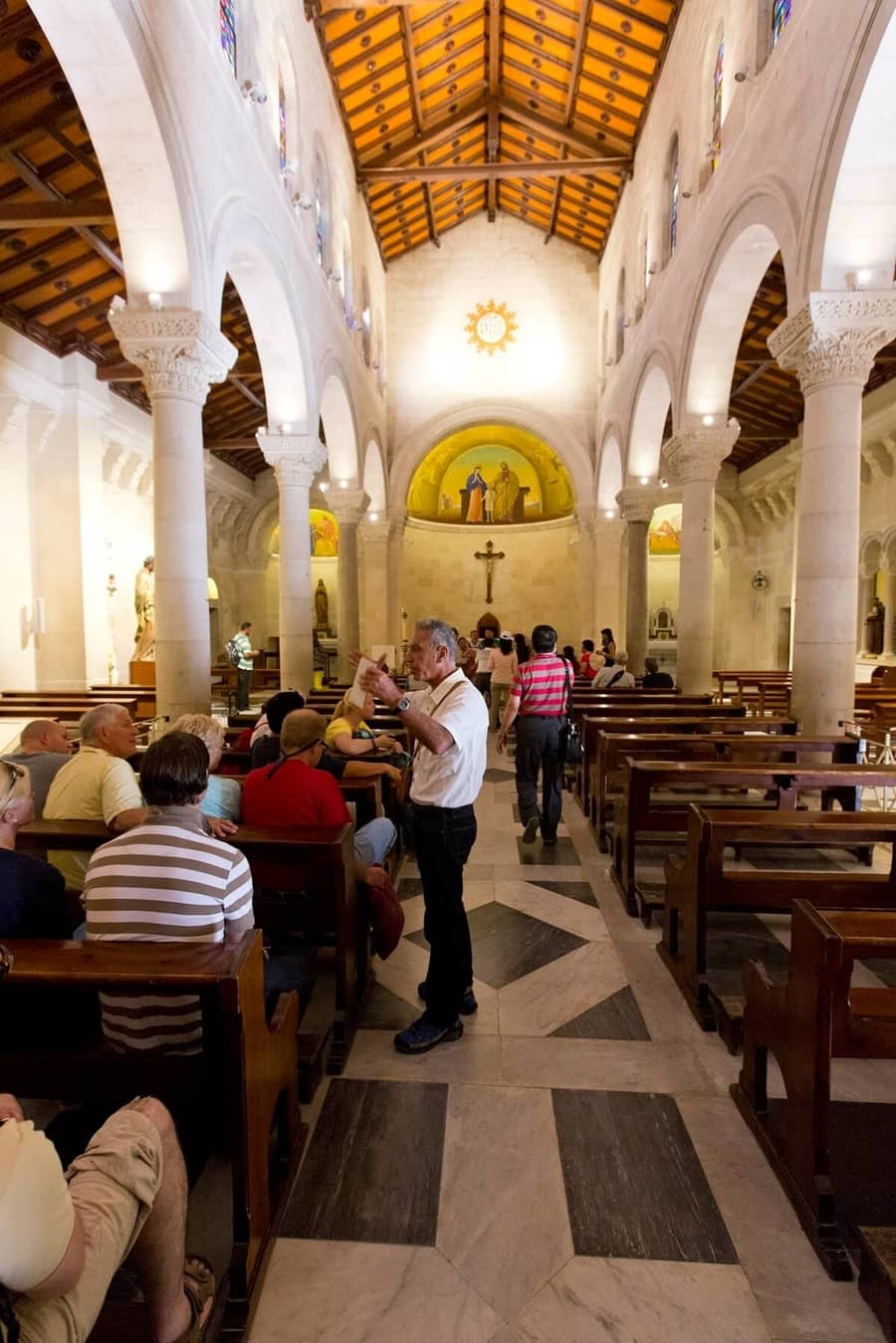