The Annunciation Church in Nazareth stands on the site believed to have been the Virgin Mary’s childhood home. It is also where the Angel Gabriel appeared before her and told her of her future son, the Messiah. The appearance of Gabriel, his announcement and Mary’s consent to be the mother of God is known as the Annunciation.

There have been four earlier churches built here to mark this Biblical site, the earliest being a 4th century Byzantine church followed by a Crusader church; a 14th century Franciscan church and the present church completed in 1969. You can still see parts of the previous churches incorporated in the present structure and the remains of Mary’s grotto home. Today the beautiful church is the city’s top attraction and attracts Christians from around the world that come to see the remains of Mary’s home and the magnificent church.

The Church of Annunciation Nazareth

The present church was designed by Giovanni Muzio and completed in 1969. The Catholic Church has basilica status and is one of the largest churches in the Middle East. The Annunciation Church has two levels and reaches a height of 59.5 meters. The church has two levels an upper level and lower level. At the heart of the lower level is the sunken Holy Cave or grotto, Mary’s former home and site of the annunciation. This is also the level where the remains of earlier Crusader and Byzantine churches can be seen. You can see a stone wall behind the cave which has survived from the Crusader’s 12th century church. A Byzantine floor mosaic has survived from the 5th century.

In the grotto stands an 18th century altar and alongside it stands an ancient column probably from the 4th century. A small staircase leads from the grotto to a smaller cave known as Mary’s kitchen and from there to the exit and the exterior yard. Directly above the Holy grotto is an octagonal opening beneath the copula so that people on the upper level can look down into the Holy grotto. Beneath the altar on the upper level is one of the world’s largest mosaics. Crowning the church is a beautiful concrete cupola created to resemble an inverted Madonna lily with its petals open. The lily is a symbol of Mary’s purity and of Nazareth. The dome is topped by a lantern that lets natural light into the upper level of the church. The upper church is used as the Nazareth Catholic parish church.

Highlights of Nazareth’s Church of the Annunciation

Highlights of the church include the names of former Popes engraved in the marble floor; a mosaic painting by Salvador Puma featuring Jesus, Mary and Saint Peter; a bronze statue of Jesus and reliefs of Mary, the Angel Gabriel, Matthew, Mark, Luke and John. A statue of young Mary as she would have been when the angel came to her overlooks the southern entrance welcoming visitors. The bronze doors of the church feature reliefs depicting scenes from Christ’s life.

Mosaics of the Church of Annunciation

One of the most fascinating features of the Annunciation Church is a collection of mosaic Marian devotions displayed on the walls of the church and the church yard. These mosaics each depict Mary and baby Jesus and were donated by Christian communities around the world. Each mosaic reflects the culture of the country it was made in and the way they envision Jesus and Mary. There are 43 mosaic paintings from places like Spain, Italy, Ukraine, Japan, the Canary Islands and Columbia. It is fascinating to see the different depictions of the Holy pair, for example in the Chinese mosaic Mary is Chinese; the Honduras and Thai Mary wear their national costumes; the American Mary is black and the Cameroon mosaic features African symbols.

To visit The Church of Annunciation Join our Nazareth and Sea of Galilee Tour. 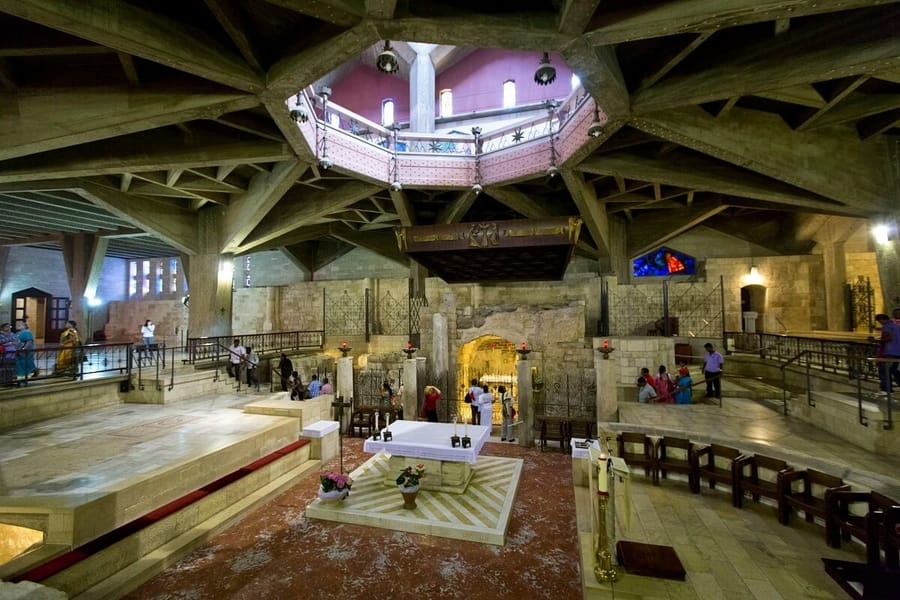