Modern-day Kfar Kana (Kfar Kanna, Khirbet Cana or Cana) is an Arab town about 7km northeast of Nazareth in the Lower Galilee. The town is famed as the site of the New Testament miracle performed by Jesus when he turned water into wine. In the 4th century Empress Helena, the mother of Emperor Constantine identified Kana as the Biblical site and had a church built in the town.

An 8th century tradition also associated Kfar Kana with Biblical Cana. In the 17th century a papal emissary identified two possible locations for Biblical Cana – Khirbet Qana and Kfar Kana. On his journey to the Holy Land, he saw the remains of Helena’s 4th-century church and this reinforced the idea that Kana was Biblical Cana. In 1641 Franciscan monks established a presence in Kana and pilgrims journeyed to the town including St Jerome. In 1879 a new Franciscan church was constructed on the remains of an earlier church.

In the Bible, the Gospel of John refers to Cana of Galilee several times. John 2:1-12 tells of Jesus’ visit to the town of Cana. Jesus, some of his disciples and his mother, Mary were invited to a wedding in the Galilee town of Cana. This took place three days after Nathanael (Bartholomew) had become a disciple and Cana was Nathanael’s hometown.

It seems that Mary was involved in helping to arrange the wedding feast. She noted that there was a shortage of wine and tells Jesus “They have no wine.” Jesus replies to Mary saying: “Why is that a concern to me or you?” Mary leaves the matter at that and tells those organizing the feast to “Do whatever he (Jesus) tells you.” Jesus instructed the people to fill six stone water jars with water then he tells them to “draw some out and take it to the master of the feast.”

Unaware of the miracle that has occurred the master of the feast praises the quality of the wine saying: “you have saved the fine wine until now.” This first miracle is significant in strengthening the disciples’ faith in Jesus. This event is also referred to as the first of Jesus’ signs and as his first public miracle.

This first miracle is interpreted as showing us the sanctity of marriage and that the event should be celebrated. It teaches us that Jesus wanted to save the wedding party the embarrassment of not having enough wine to serve. Other Biblical references to Cana include a later visit by Jesus when he is asked to heal the son of a nobleman (John 4:46-49). Cana is referred to in the Book of Joshua but it is unsure whether it refers to the same Galilee town of Cana.

Today visitors to Kana can see the Franciscan Wedding Church. This small church has a front courtyard and a modest façade adorned with angel sculptures. The façade is flanked by twin bell towers and the building is topped by a dome. The church has two floors; on the lower level you can see the partial remains of a Byzantine mosaic from the 5th-6th century.

There is a small museum displaying archaeological artifacts found in the area including a winepress, cistern and vessels. One of the jars on display is believed to have been one of the original six jars used by Jesus when he created the wine. Excavations beneath the church uncovered 1st century dwellings and the remains of an earlier church.

The Greek Orthodox Church of the Marriage Feast stands across from the Franciscan Wedding Church. This church holds two stone jars which some believe to be two of the original jars used by Jesus but they could also be early baptismal fonts. Not far from the modern town is the excavation site where the remains of ancient Cana have been uncovered. Remains have been found from the Roman, Greek, Byzantine and early Arab eras. 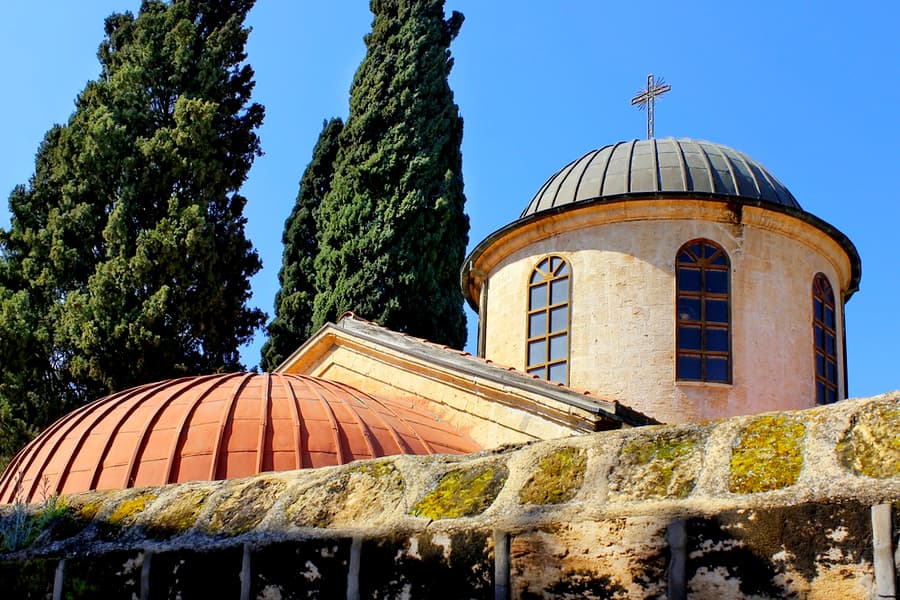