Mount Precipice also known as the Mount of Leap or Mt. of Precipitation stands on the outskirts of Nazareth in northern Israel. It is the traditional site where Jesus was rejected by an angry mob and where a miracle occurred.

Mt. Precipice in the Bible

Luke 4:15-30 tells of Jesus’ visit to Nazareth and how he attended synagogue where he read from the Book of Isiah: ”The Spirit of the Lord is upon Me; Because he has anointed Me.” Jesus then sat down and said, “Today the scripture is fulfilled.” In this, he was declaring himself to be the son of G-d, the Messiah.

The worshippers in the synagogue were outraged by Jesus’ audacity and a mob of angry town’s people gathered. They chased Jesus out of Nazareth intending to throw him off the cliffs of Mount Precipice. There Jesus passed through the crowd of people and disappeared. His disappearance is left unexplained – a miracle. He may have leaped off the mount, disappeared miraculously, or jumped into a hidden cave. The Bible does not explain further.

Excavations at the Mount of Precipitation uncovered the Qafzeh Cave which held prehistoric remains including 13 Neanderthal-era skeletons dating back 100,000 years. The cave could have been the same one that opened up giving Jesus a place to hide from the mob as he seemed to disappear.

On a visit to Mt Precipice, you can enjoy panoramic views of Mount Tabor and the Jezreel Valley. The lookout point on the top of Mt. Precipice is the start of the Gospel Trail, a hiking trail that connects several Biblical locations. On the north side of the mount is a 40,000-seat auditorium which was used for the most famous Masses ever held in the Holy Land. In 2009 Pope Benedict XVI held his biggest ever Holy Land Mass here and in 2013 the Latin Patriarch of Jerusalem led 7,000 Catholics in prayer on the International Day of Faith. 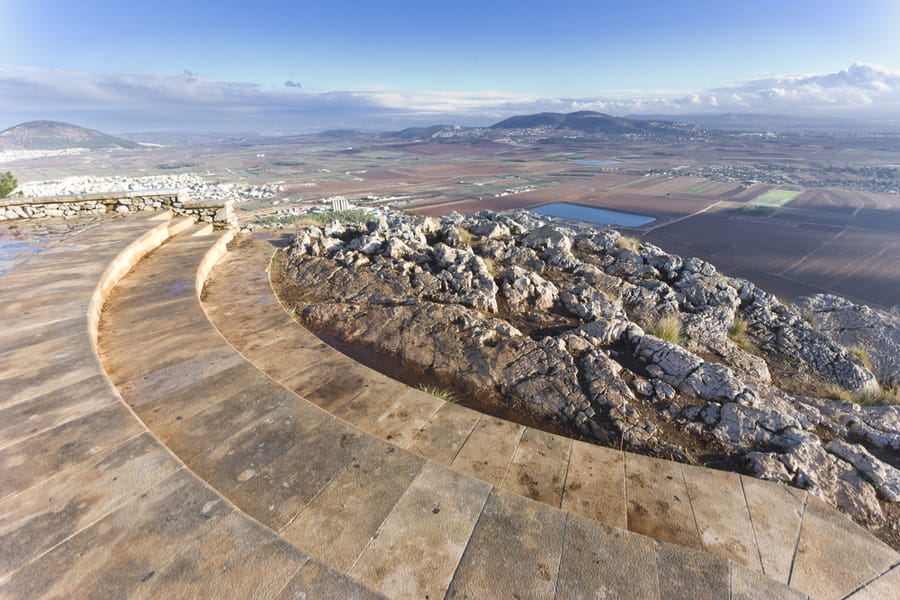