Israel’s Jezreel Valley (also known as the Megiddo Valley)  is located in the upper part of the country, bordered on its north by the Lower Galilee, to the south by Mount Gilboa, to the west by the Mount Carmel Range, and to the east by the Jordan Valley. It is a large, fertile plane, dotted with natural springs, and affords the visitor all kinds of wonderful views. As the agricultural heartland of the country, it is famous for its astonishing flatness, as well as its beauty. Although there are many valleys in Israel, it is particularly well-known and loved and usually referred to by Israelis simply as ‘ha Emek’ which, in Hebrew, means ‘ the Valley.’ 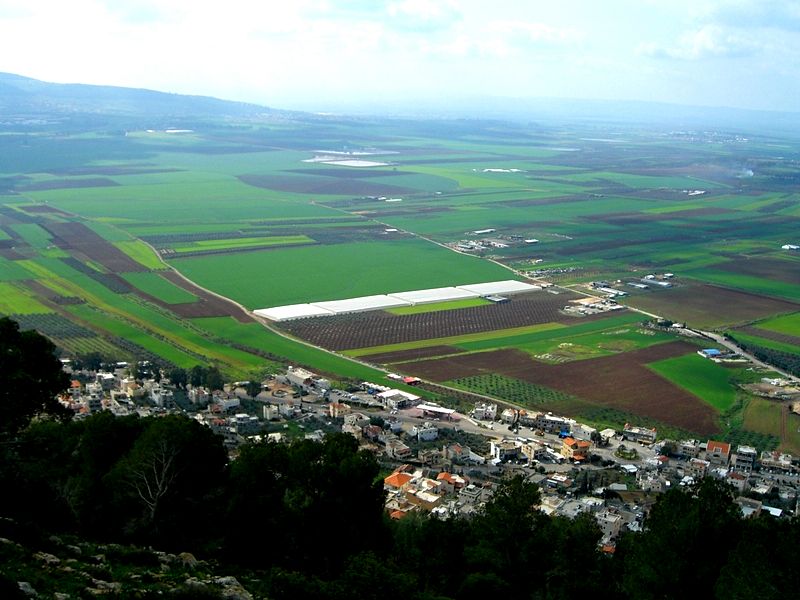 With its fertile soil and endless farms, it is a beautiful spot for hiking, picnics, and general enthusiasts of the outdoors. Often overlooked by tourists on a tour to Israel, it is not just a wonderful place for nature lovers but also boasts sites of great religious and historical significance. Jezreel, in Hebrew, means ‘ God sows’, and because of its strategic location (as a stopover for armies en route to Egypt, Turkey, or the Arabian Peninsula) the valley is not just rich in soil but also in archaeological artifacts.

History of the Valley

The history of the Jezreel Valley dates back thousands of years (circa 7000 BCE) and is mentioned in the Hebrew Bible as the home of Gideon (a military leader of the Israelites as well as a prophet and Judge). The valley is also home to one of the area’s most famous battles - the Battle of Megiddo.

This is mentioned in the Book of Revelations as the place at which the last battle before the Apocalypse will be fought, between the forces of good and evil. (Fun fact:  the ancient fortress city of Megiddo has seen more battles than any other spot on the earth. Join the Megiddo and the Jezreel Valley Private Tour to check that). 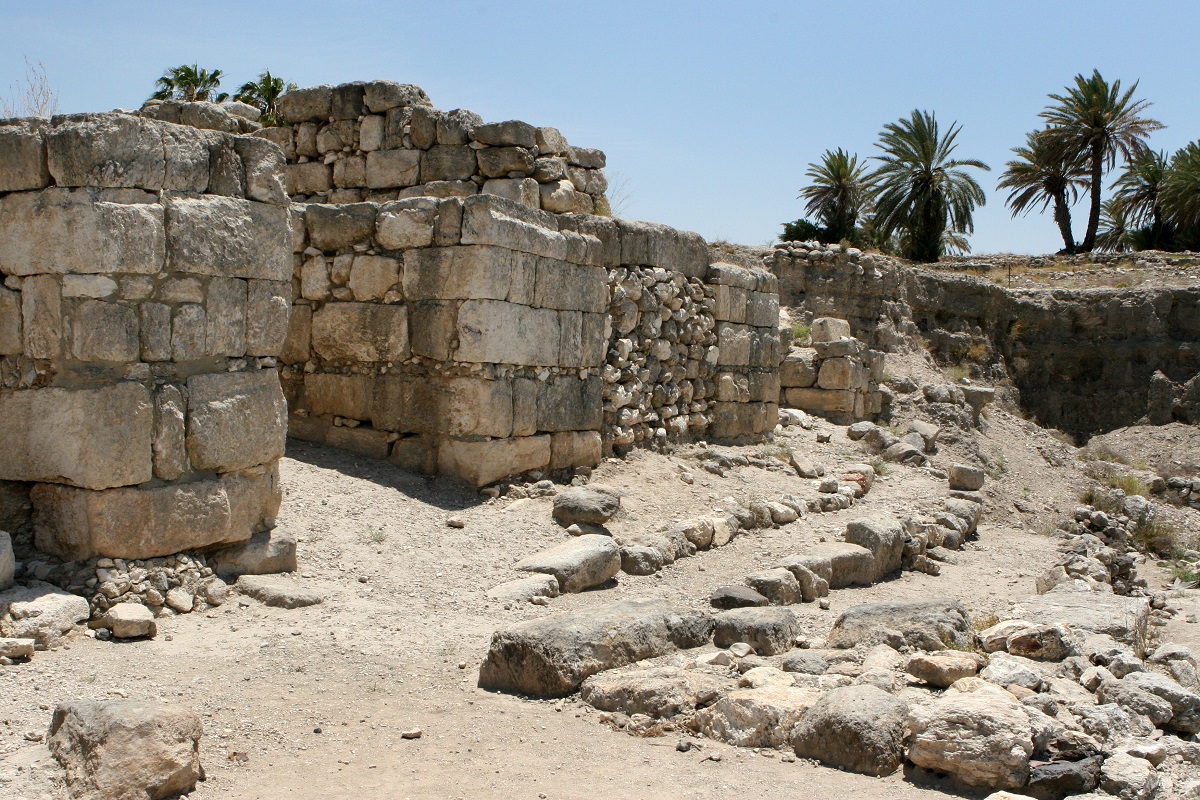 Geography of the Area

The Jezreel Valley, as mentioned before, is extremely fertile and by far and away the agricultural heartland of the north of Israel.  It is the veritable ‘ breadbasket’ of the country, with its wheat crops. Driving through the area, you are also bound to see cotton fields, fish ponds, grazing cattle, sunflowers, and age-old silver-green olive trees on terraced hillsides. Farmers here (often working in collectives) grow white beans, chickpeas, cheeses, watermelons, lemons, limes, and cherries.

Today, most of the population can be found in Afula or large villages, and small-scale family orchards are mainly a thing of the past although some families hold true to their heritage and continue to market crops that their forefathers did. Whether exploring the Jezreel Valley independently or by taking a private tour, traveling the area will give you the opportunity to visit not just historical and religious sites but also local kibbutzim (on our private tours, we can arrange such visits with ease).

Let’s now take a look at some of the most important sites in the region, which include mountains, national parks, and even a Crusader castle. All are based in this beautiful, and often under-explored part of the country. Intrigued? Read on ... 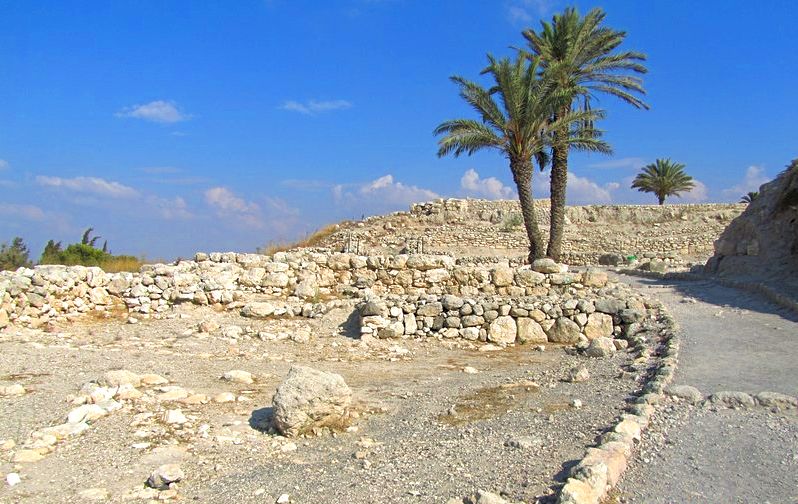 Megiddo refers to a "tel" or hill, and ancient Megiddo overlooked the Via Maris trade route where caravans traveled (the Bible refers to it as ‘the way of the sea’). Today it is home to a well-known archaeological park where visitors can see the remains of several gates that date back to King Solomon’s reign.

On the west side of the mound is a water supply and storage system dating back to the 10th century BC, with almost 200 stairs that connect to a long tunnel and underground spring.  This system could not be seen by invaders and it was, therefore, a safe space for residents to hide, and survive, when under siege.  Also on display is the remains of a Canaanite Palace with 2 meter thick walls and an open courtyard.

Found east of the Jezreel Valley, in the Lower Galilee, Mount Tabor stands at 570 meters and is easily recognized, due to its unique shape (half hump-backed, half breast-shaped).   Mount Tabor is a very important Christian site within Galilee, as it is believed to be the spot at which the transfiguration (the becoming radiant with glory) of Jesus and where he spoke to Moses and Elijah the Prophet.

Mount Tabor is a perfect hiking spot since it is green annually, and also offers fantastic panoramic views of the area.  Visitors should not miss a visit to the Church of the Transfiguration (built upon the ruins of an ancient Byzantine church), designed by the Italian architect Antonio Barluzzi. 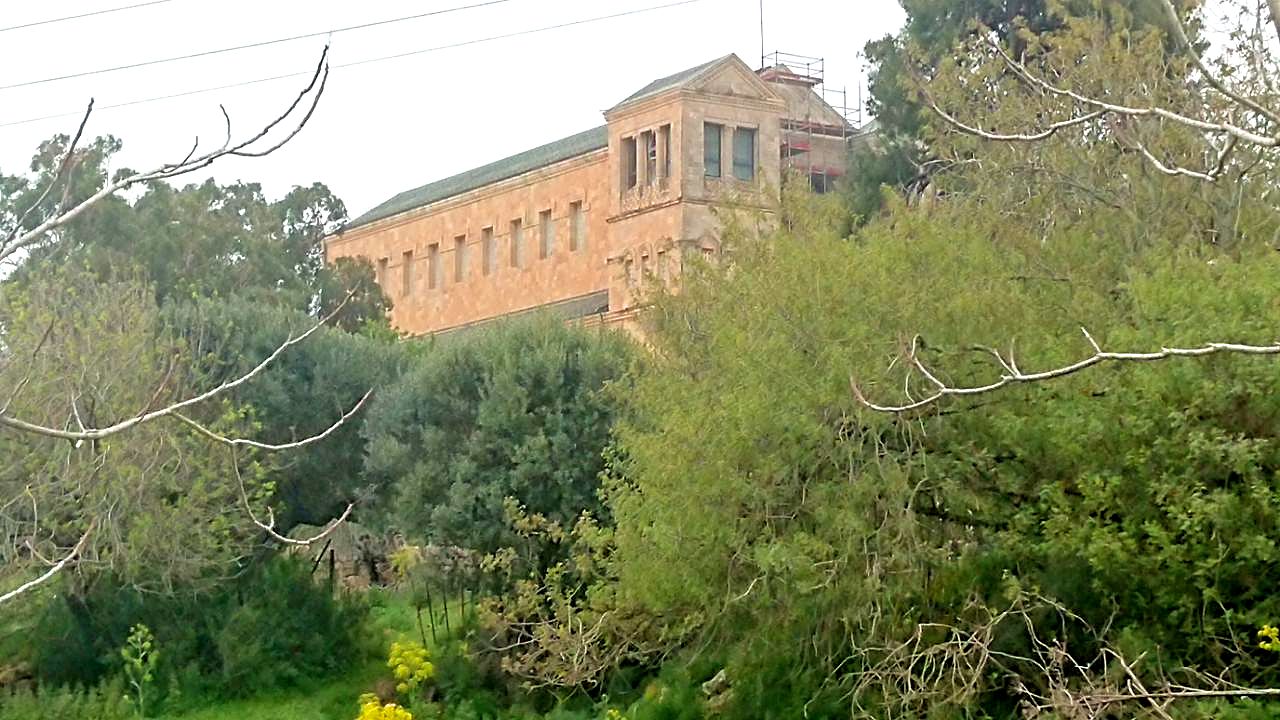 Situated in the Lower (south) Galilee, Mount Gilboa is an ever-popular spot both for locals and tourists, particularly in the spring when masses of flowers resemble a carpet beneath the visitor’s feet.  It sits 650 meters above sea level, with some rather steep ledges, but still a fine spot for hiking, picnics, and a paradise for those who love flora - in particular the lily, iris, crocus, narcissus, and anemone.

A settlement in Roman times (archaeologists later found burial caves found in nearby villages) the area was historically home to vineyards but after the Arab conquest in 636 CE, Gilboa was abandoned until about 250 years ago. Sights in the area include Tel Jezreel, the Hidden Valley (an excellent hiking path for experienced walkers), and the Maale Gilboa observation point, affording spectacular views to the south.

Gan HaShlosha National Park is arguably in one of the most lovely spots in Israel and boasts far more than just a park,  Located at the bottom of Mount Gilboa in the Beit Shean Valley, everywhere you look is water, splashing over into a number of waterfalls and natural pools where you can swim.

The pools are also surrounded by tall trees, providing wonderful shade on hot summer days.  Moreover, Gan HaShlosha boasts an archaeological museum, divided into two parts – firstly, the Museum of Regional and Mediterranean Archaeology and secondly a rebuilt Tower & Stockade pioneer settlement. This tower was one of the first ‘yishuvs’ (pre-state settlements) and dates back to 1936.

One of Israel’s oldest cities, Beit Shean (which in Hebrew means ‘the House of Tranquility) can be found  27 km south of the Sea of Galilee.  Sandwiched between the Jezreel and Jordan Valleys, it is an extremely fertile area. It is also very hot, with temperatures reaching 50 degrees in the summer.

Beit Shean houses the ruins of an ancient Roman city, destroyed in the 8th century by a huge earthquake that struck the area. In 748 CE. Excavated by archaeologists and painstakingly restored, it gives you an excellent sense of how Romans and Byzantine citizens once lived.

Not only does it boast an amphitheater, roads and impressive stone columns, mosaics, and a bathhouse, but it is also a national park. Visitors, after exploring the ruins, can walk in green spaces and quickly find themselves next to springs and valley trails.

At present, these are the largest excavations within Israel and visitors can easily spend several hours here. Look out for the model at the entrance, giving you an excellent overview, and consider attending a Sound and Light performance, after night falls. Truly a trip back in time. 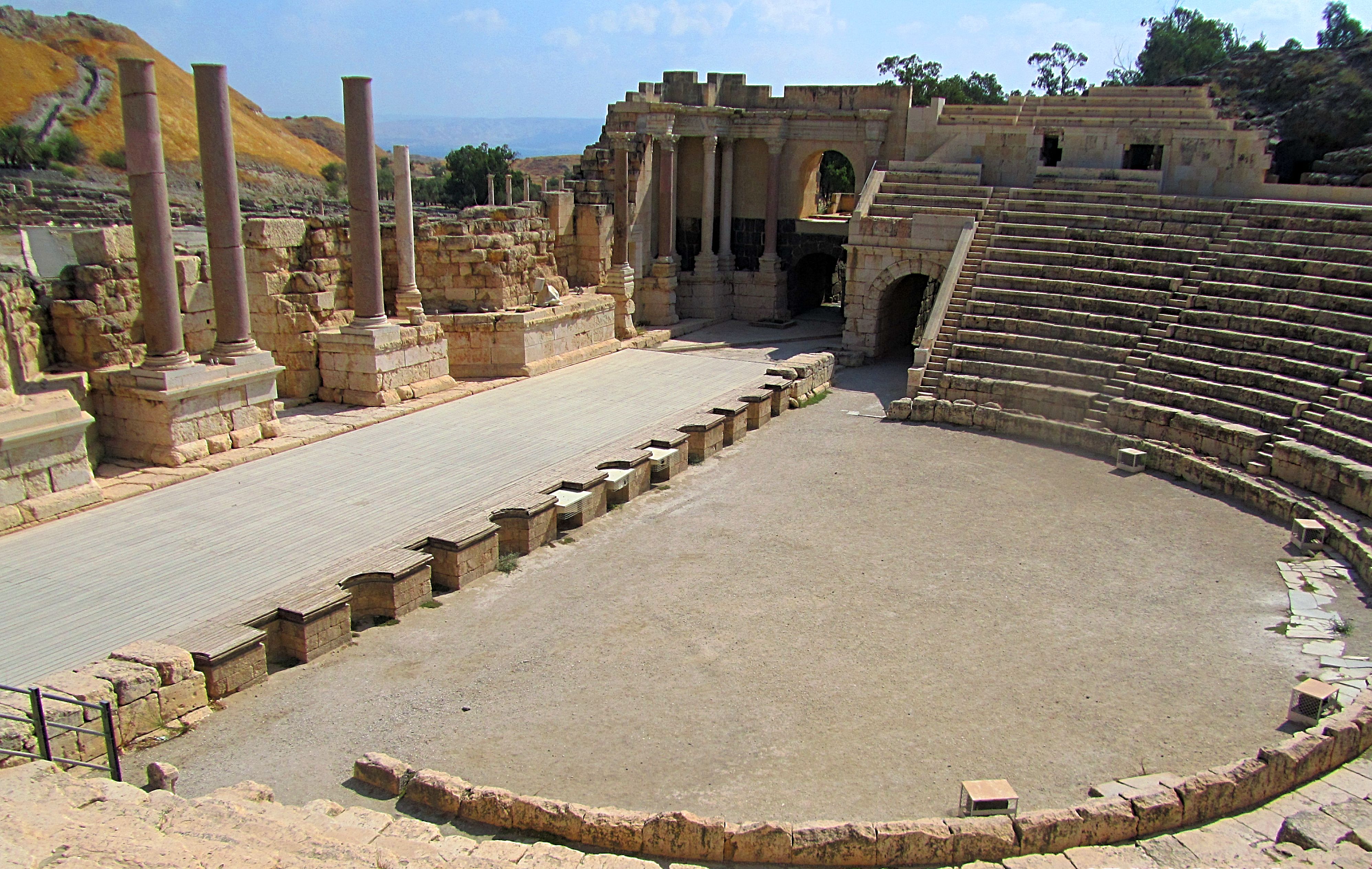 Located 20 km south of the Sea of Galilee, this fantastic Crusader-era castle (with a history stretching back to the 12th century) is easily one of the area’s hidden gems.  Designed to deter Muslim invaders, it sits high above the Jordan Valley, affording spectacular views of the surrounding area.

Belvoir (or ‘Kokhav ha Yarden’ which means ‘Star of the Jordan’ in Hebrew) was originally owned by a French nobleman named Velos.  After he sold the land to Crusaders, they built the fortress and several battles took place there before it fell to Saladin in 1189. Until the 1960s, it sat in ruins but extensive renovations mean it is now open to the public.

Architecturally, the castle is concentric (a popular design originating in Europe at that time), meaning that it was built with two defensive walls, one inside the other. Made of materials such as black basalt and limestone, the main route into the fortress was from an outer age at the foot of a south-eastern tower, ascending a ramp and then doubling back and up again to reach the inner gate in the same corner tower.

The Beit Alpha Synagogue is located in the Beit Shean Valley and dates back to the 6th century.  It was discovered accidentally in 1928 by members of a local kibbutz, who were digging in the area as part of an irrigation project. Excavations showed that the building that once stood there was of two floors and constrained not just a courtyard, vestibule, and prayer hall but the bimah (raised platform in which the Torah scroll was kept) faced in the direction of Jerusalem.

In the entryway are inscriptions both in Greek and Aramaic and three extraordinary floor mosaics,  The first depicts the famous ‘Akedah’ (‘Binding”) scene from the Bible, between Abraham, commanded by God to sacrifice his son Isaac; the second is a Zodiac wheel (depicting 12 different animal signs); the third depicts a synagogue scene, complete with a hanging lamp and a Torah shrine flanked by two lions, with Jewish ritual objects surrounding the animals. Beit Alpha is managed by the Israel Parks and Natura Authority.

Ma’ayan (meaning ‘Herod’s Spring’ in Hebrew) is a beautiful national park located at the foot of Mount Gilboa. It offers panoramic views of the Jezreel Valley, a large swimming pool (which is fed by water from the nearby spring), and a great deal of greenery, making it an ideal attraction for both older and younger visitors.

The area dates back to the 12th century, where it is thought to have been the place that Sultan Saladin pitched his tent, en route to Jerusalem.  In the 1920s the area was purchased from Palestinians by a Zionist Jew named Yehoshua Hankin, and settled by Jewish pioneers who eventually established two kibbutzes.

Visitors can also explore the house and tomb of Hankin - the entrance to the tomb of Hankin (and his wife Olga) was designed by David Palombo, the architect who designed the gates of the Israeli Knesset (Parliament). Inside the house are historical artifacts relating to the Hankin era and next door is a war memorial honoring residents of the Jezreel Valley who died in many of Israel’s battles since 1948. 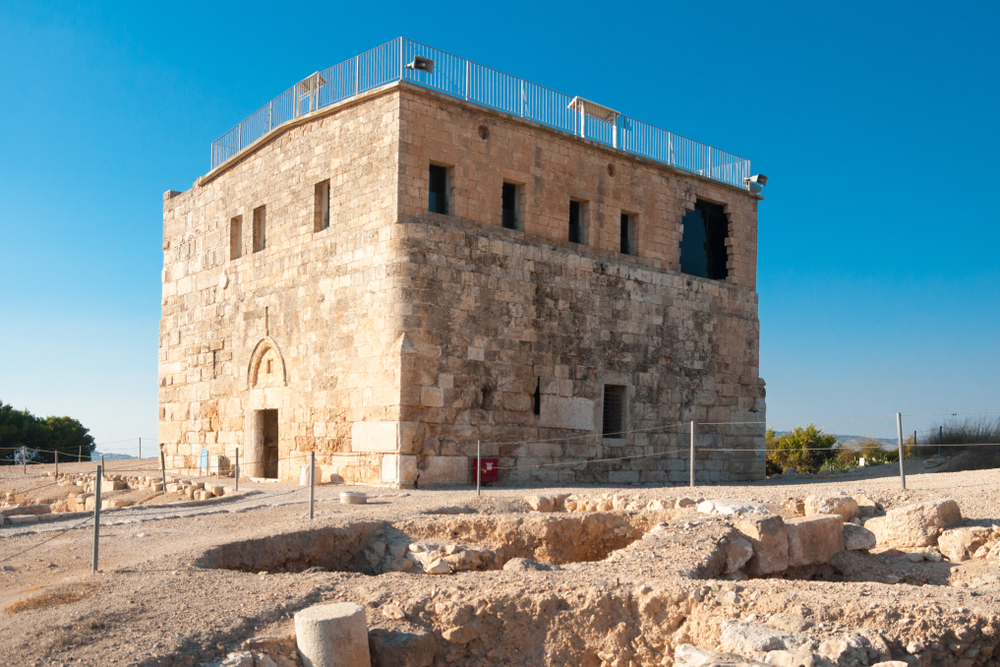 The Jezreel Valley is not easily accessible by public transport, but the biggest city in the region is Afula, which can be reached by bus no. 825 from Tel Aviv (approx. 1 hour 30 minutes) or by train from Haifa (approx. 32 minutes). To see as much of the area as possible, in a short period of time, it is advisable to hire a car.

Alternatively, if you are not keen on driving, and would appreciate the knowledge and insight a guide can give you then why not take a Galilee tour? We would recommend the Mount Tabor, Tsipori, Beit Shearim private tour, in which you can visit the famous Church of the Transfiguration, enjoy Tsipori’s ancient Roman amphitheater and also make a  visit the burial caves of Rabbi Yehuda HaNassi.

Since all of these private tours can be customized, it is entirely up to you to decide what to visit and how long to spend there.