The Rosh Hanikra cliffs stand majestically on the most northerly point of Israel’s Mediterranean coast just meters before the Israel-Lebanese border. The bright blue sea crashes against the white cliffs. Light reflects off of the white cliffs onto the seawater creating a beautiful turquoise color. The Rosh Hanikra cliffs are riddled with natural grottos that are now accessible to tourists.

The Rosh Hanikra caves were probably formed when an earthquake caused fissures and crevices in the limestone rock through which rain could slowly penetrate. Over thousands of years, the rain trickled in through the cracks and waves bombarding the cliffs eroding the chalk and limestone. Today there are 200 meters of cavities, tunnels, and chambers that create a labyrinth of caves in the cliffs of Rosh Hanikra.

A Brief History of Rosh Hanikra

Rosh Hanikra’s strategic position on the route from Europe, Turkey, Syria, and Lebanon down into the Holy Land and on to Egypt, Africa, and the Arabian Peninsula meant that over the years many armies, pilgrims, and trade caravans passed this way. Among the ancient armies that would have taken the coastal road past Rosh Hanikra, there were Assyrians, Persians, Romans, Greek, Ottomans, and Crusaders.

During World War I the British took Palestine from the Ottomans and their allies the Germans while the French took Lebanon and Syria. In order to facilitate the movement of troops and a connection to their French allies the British paved a road along the coastline through Rosh Hanikra. In doing so any evidence of ancient routes was destroyed.

In World War II the British planned a rail line between Istanbul and Cairo. South African troops were employed to blast three railway tunnels through the rock of the Rosh Hanikra cliffs.  The British and their allies also built a suspended bridge at Rosh Hanikra. The train served the British for a while including transporting Jewish concentration camp survivors to exchange for German descendants living in Palestine.

The Rosh Hanikra railway bridge was bombed by Jewish resistance fighters in February 1948 to prevent Arab forces from using the route in the War of Independence. A few months later the State of Israel was established. The railway was too expensive to repair and so the tunnels were soon sealed and have remained closed.

Visitors to Rosh Hanikra can still see a line of the historic train tracks and enter one end of the sealed tunnel. The Israel-Lebanon border crossing at Rosh Hanikra is still used but mainly by UN personnel. The Israel-Lebanon armistice agreement of 1949 was made at the Rosh Hanikra border crossing. For many years access to the caves was only from the sea and so divers and swimmers were the only ones able to experience the incredible beauty of the grottoes. In the 1970s the Rosh Hanikra cable car was installed so that everyone could have access to the grottoes.

Visitors to Rosh Hanikra descend 70 meters to the caves in the shortest and steepest cable car in the world at an angle of 60°. From here there are brilliant views all the way down the Israeli coastline. From there, visitors can walk through the marine grottoes. The Rosh Hanikra grottoes are managed by Kibbutz Rosh Hanikra.

The site includes a café, restaurant, and souvenir shop. There is an introductory film about the making of the caves and their history. Bicycle and golf cars can be rented if you choose to take an excursion along the sea promenade running south from Rosh HaNikra along the edge of the sea. Want to visit Rosh Hanikra? Join our Caesarea, Acre, and Rosh Hanikra Tour.

Where: Rosh Hanikra is at the northern end of highway route #4; 10-minute drive north of Nahariya.

Open Hours: the caves and cable car of Rosh Hanikra are open Sunday to Thursday and Saturday 9 am-6 pm as well as Friday 9 am to 4 pm. In very bad weather the caves are closed. 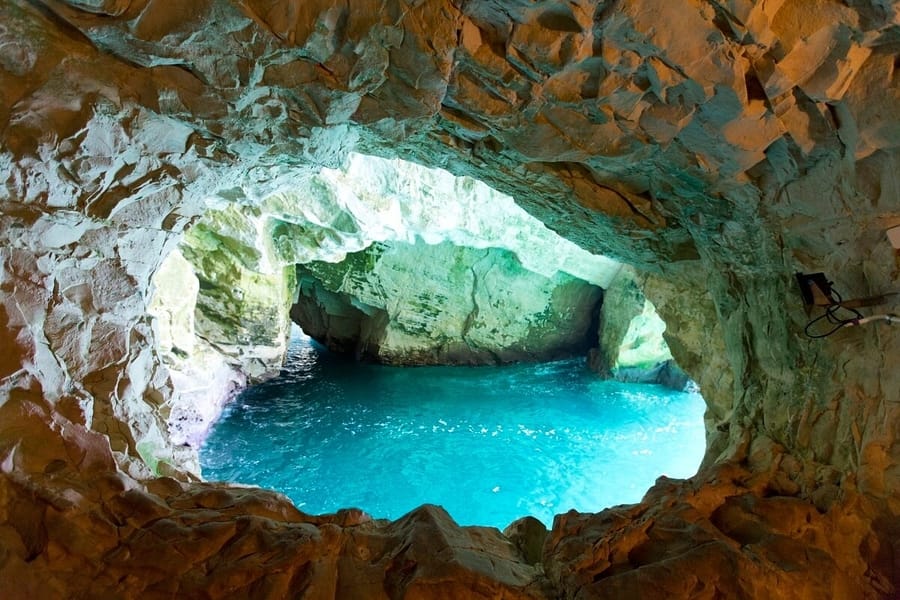