The Dan, Hermon (Banias) and Snir rivers originate in the Golan Heights and come together to form the Jordan River which flows south for 250 km. The Jordan’s course takes it from the north through the Sea of Galilee and down through the Jordan Valley to its termination point at the Dead Sea. In the north, the Jordan runs through lush vegetation and idyllic landscapes. In the summer months, northern Jordan comes alive with thousands of visitors having fun on the river in inner tubes, kayaks rafts. The Jordan River is a significant religious site mentioned many times in the Bible. The People of Israel crossed over the Jordan to enter the Promised Land and later Jesus was baptized by John the Baptist in the waters of the Jordan.

The Jordan River in the Bible

The Jordan is mentioned in the Old Testament and called the Garden of the Lord (Genesis 13:10); Jacob crosses the Jordan heading for Haran (Genesis 32:11); the river is named as the border between two tribes in Numbers 34:15 and the same book refers to the Jordan of Jericho. In Judges we read about the Ephraimites being slain by Jephthah at the Jordan and in Judges Gideon waits at the Jordan to ambush the Midianites. The Jordan River is mentioned again as the place where Solomon had his brass foundries and as the place where Elisha performed miracles. Crossing the Jordan - After wandering for forty years in the desert the Jewish people reached the Jordan. Moses stood at Mount Nebo and looked towards the Promised Land but it fell to Joshua to lead the tribes across the Jordan River (Josh 3:14- 4:24). In the New Testament, we read of John the Baptist performing baptisms and it is mentioned several times that Jesus crossed the Jordan during his ministry in the Galilee. However, the most significant event that occurred on the Jordan was the baptism of Jesus.

The Book of Matthew does not describe where exactly Jesus was baptized by John (Mat 3:13-17) and there are different traditions. Some believe that Jesus was baptized in Galilee where Yardenit is today; others consider Al-Maghtas on the Jordanian side as the true site and others hold Qasr el Yahud near Jericho to be the true baptismal site. However, all traditions agree that the baptism took place at some point in the Jordan River.

Yardenit is one of the traditional sites where Jesus could have been baptized. At Yardenit, where the Sea of Galilee flows into the southern Jordan River, steps and handrails have been provided so that Christian pilgrims can be baptized in the Jordan River safely. Christian pilgrims clad in white robes enter the river to the sound of prayers and hymns. The site has showers, restrooms, a restaurant and a gift shop.

For those who believe that Jesus was baptized in the southern wilderness near the Dead Sea; there are two sites, one on the western bank (Qasr el Yahud) and one on the eastern bank (Al-Maghtas). Qasr el Yahud (Castle of the Jews) is thought to be where the Jews crossed over the Jordan and where Elijah the Prophet ascended to heaven. Qasr el Yahud is in the West Bank, southeast of Jericho and is not as easily accessible as Yardenit in the north. The site has been made more tourist-friendly with the addition of rails and steps into the water plus a visitor center.

Want to visit the Yardenit and get baptized? Join our Nazareth and Sea of Galilee Tour.

Sea of Galilee
The Mount of Beatitudes
Church of the Primacy of St. Peter
Bethsaida 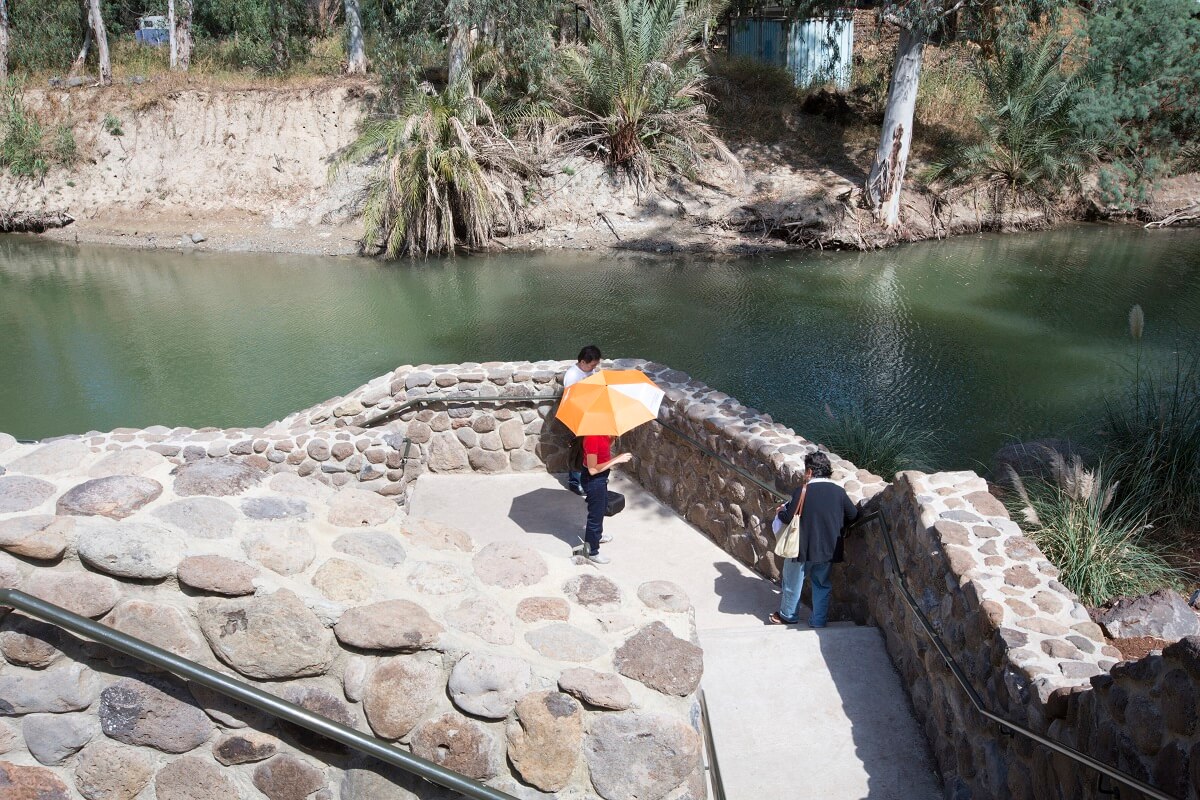